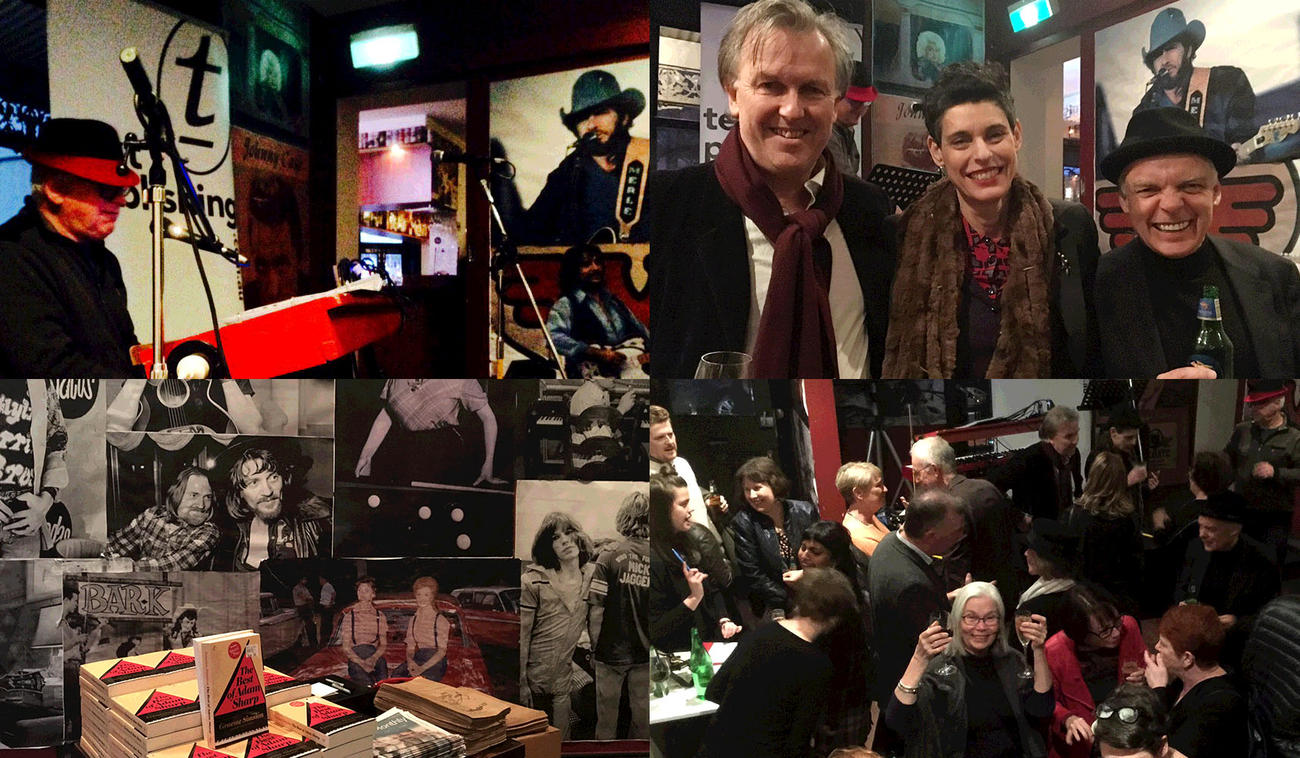 Launch of The Best of Adam Sharp by Graeme Simsion

Headlining this week is the news that Graeme Macrae Burnet’s His Bloody Project has been shortlisted for the Man Booker Prize. Read an extract or watch Graeme talk about his research and the ‘emporium of words’ that enabled him to channel the 150-year-old language of the Scottish Highlands.

The Lesser Bohemians has again been reviewed widely—The Daily Mail describes it as a ‘magnificent, sex-soused, innocence-to-experience rollercoaster’, Bookmunch as ‘viscera-bared, blood-to-the-elbows fiction, and that’s why it’s so effective: like real life, it doesn’t stop at the easy breaks’. Eimear has an interesting piece in the Guardian about the influence of Lars von Trier, James Joyce and Sarah Kane on her work. You can also see her in an interview with ABC Bookish or read more reviews at the Irish Times, Independent, Adelaide Review and New Statesman: ‘If you rush McBride’s sentences, you’ll trip...The rewards for adopting a slower pace are linguistic joys and surprises on every page.’

With the launch of Everywhere I Look in the US this week, an extract appeared on Lithub, in which Helen ‘reviews’ Pride and Prejudice and declares Austen a ‘cunning minx!’. Wonderful!

In the Australian, John Freeman describes reading Coetzee: ‘An intimacy born from urgency crackles through each of his books, as if one is not reading a text but being plugged into a brand new form of current—reinvented each time to carry a new and urgent form of narrative information...Coetzee is the most radical shapeshifter alive.’

New Daily ran a feature on the high-adrenaline real-life story of three friends who saved a train from a terrorist attack: The 15:17 to Paris. You can also read an extract in the NZ Herald or Geelong Advertiser.

The Rules of Backyard Cricket is being well received in the UK. CrimeTime says: ‘Get out and buy this book; it is the best new novel I’ve read this year.’ Shots says it has ‘moments of sheer delight in the boyhood sequences, where sibling rivalry is painted with unerring accuracy...Any brothers reading it will instantly recognise the familiar and fleeting boyhood experiences of joy and fury, victory and defeat, love and hate…I heartily recommend it.’

Vikki Wakefield describes how she beats the blank page in this Q&A with Novel Kicks. Her new book Inbetween Days is featured in Buzzfeed’s ‘28 YA Books Everyone Should Read’.

In other YA news, TheBookKat says Mark Smith, author of The Road to Winter, ‘has written a story that readers will really love.’

Thanks to the lovely bookshops who have created gorgeous Text Classics displays in stores around the country. Here are a few pics.

‘Simon Barnard’s book, for which he meticulously examined records to produce a rich pictorial history, also explores inking methods and provides a fascinating glimpse of the lives of the people behind the records,’ says news.com.au in a great feature on Convict Tattoos, with lots of the book’s detailed illustrations.

Spectator describes Peter Mares’s Not Quite Australian as a ‘detailed, authoritative book’ in which ‘Mares...raises fundamental questions as to how a liberal democracy should treat people who have lived within its borders for a lengthy period.’ Peter also spoke to Triple R this week. Listen here.

Ferrante also got a mention in Slate’s glowing review of Nadja Spiegelman’s I’m Supposed to Protect You from All This: ‘What Ferrante did for female friends—exploring the tumult and complexity their relationships could hold—Spiegelman sets out to do for mothers and daughters...At the heart of I’m Supposed to Protect You From All This lie two overlapping mysteries: the mystery of the past, which memory can never accurately conjure, and the mystery of other people, whom you can never truly know...On the subject of memory, Spiegelman is remarkable—mature, wise, and richly expressive.’

Art lovers should tune in to Ashleigh Wilson’s interview with ABC Classic FM about his biography of Brett Whiteley. Also, check out this review of Sebastian Smee’s The Art of Rivalry in the Atlantic, which concludes that Smee’s ‘brilliant group biography is one of a kind’.

We launched the much-anticipated new book, The Best of Adam Sharp, by Graeme Simsion last night. Special guest, Deborah Conway sang a couple of songs from the book, accompanied by Pete Walsh on the keyboard (check out the playlist here). Graeme also started his promotional tour, with interviews at Wyn FM and Booktopia podcast.

And on a final, sad note, this week we say goodbye to the extraordinary Inga Clendinnen. Text is the proud publisher of five of Inga’s books. In the Australian publisher Michael Heyward wrote, ‘Inga Clendinnen was a brilliant historian who became an extraordinary writer. So many of her students remember what an inspiring and occasionally terrifying teacher she was. She was fearless, intuitive, mercurial. She was generous and endlessly curious, a conversationalist who spoke in enthralling, sinuous sentences. Talking to her made you feel alive.’ Vale, Inga.