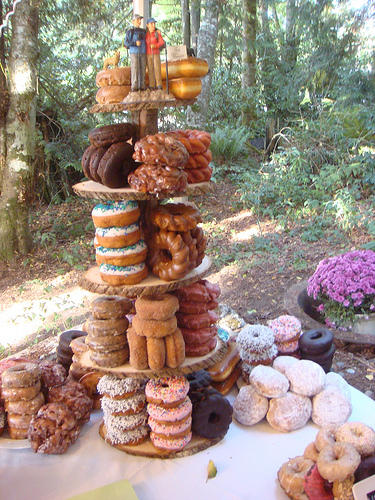 ‘I have come home at last! This is my real country! I belong here. This is the land I have been looking for all my life, though I never knew it till now…’ C.S. Lewis

As I Lay Frying, a site for all your literary-quotes-with-pictures-of-doughnuts needs.

20 theories of book cover design. I’m familiar with some of these, but I have to say ‘turd theory’ was a new one for me.

Frodo Baggins looked at the ring. The ring was round. It was a good ring. Lord of the Rings as written by Hemingway and others.

“You’re too late,” says a squirrel. “The unicorn is dead.” THE END You Chose Wrong: a collection of bad ends in choose-your-own-adventure stories.

Here are some books to argue about. I’m going to choose to argue about Wolf Hall, because I think a hardback copy of that could do some real damage in a fight.

(Suzanne) Collinsian 1. Having wildly colored hair and skin. 2. Marked by children killing each other. Contemporary authors as adjectives.