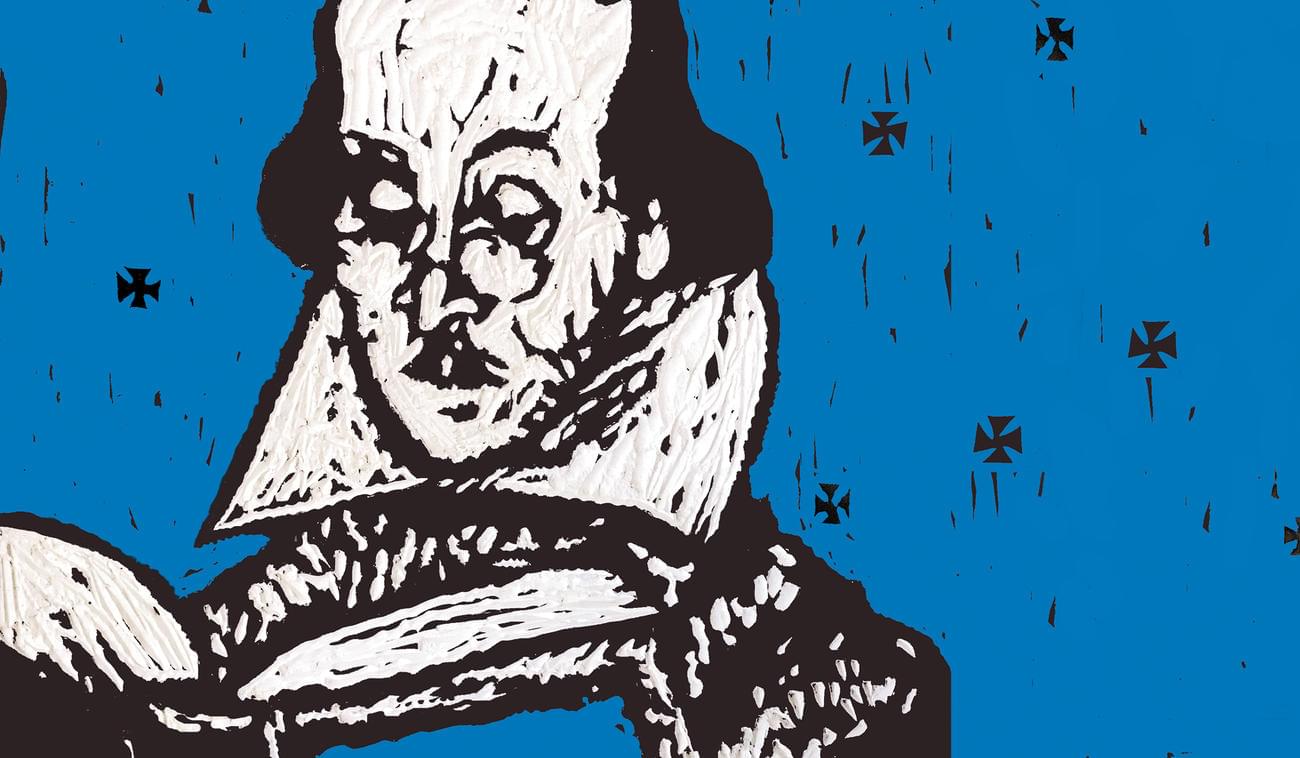 It’s so good that we have to share with you.

Take it away, Stuart!

Firstly I would like to thank Alaina and Justine, guests and hosts, the Kells family, Nevillians and Text Publishing for doing a terrific job of publishing this book.

This delightful cover, by the wonderful Chong Weng Ho, resembles Shakespeare, but it is actually me, looking in the mirror in a few years’ time.
You can tell by the ear lobes, the receding or receded hairline, the shape of the face, and the shape of the glasses.

Nevertheless, I’m pleased to be launching this book today.

When you study English literature at university, you are given a set of tools with which to approach literature; to analyse it; and to understand its place in the world.

This book uses none of those tools.

Instead, it chronicles a twenty-year journey in the rare-book world.

The episodes from that quest are highly personal. They define me as a person.

The episodes include meeting scholars and librarians around the world.

Authors, too, such as Ivan Southall, late in his life; and having the pleasure of cataloguing part of his private library.

And they include finding rare books in unlikely places, such as one, discovered near here, of considerable Shakespearean interest, and whose subscribers included the greatest bookmen from the golden era of British Bibliomania.

The formative episodes also include visiting some of the world’s greatest libraries and bookshops.

I’ve had the privilege of travelling with a young family to the sacred sites of Shakespeare studies, such as the Bodleian, the Weston, the British Library, the Folger and Shakespeare Hall at Meisei University in Tokyo.

The episodes also include finding myself at Monash University surrounded by Shakespeare sceptics, and especially by the world’s richest concentration of Nevillians or Nevillisters, people who believe Sir Henry Neville wrote the poems and plays that most people regard as Shakespeare’s.

Apart from my Nevillian encounters, I was able to make broader discoveries of Australian interest.

I’ve made a small step towards documenting the long history of antipodean Shakespeare scepticism, which stretches back well into the nineteenth century.

This book, for the first time in history, links the works of Shakespeare, Barrington and Machiavelli.

And I met a local bookseller who revealed, casually, that he owns a Shakespeare letter.

In light of this twenty-year journey, I can’t imagine anyone would find Shakespeare boring, or believe there is nothing new to be said.

Where, then, have I got to in my quest?

At the risk of spoiling the ending, I haven’t found Shakespeare’s library.

But I’ve confirmed its existence, clarified its scale and scope, and documented what happened to it.

Along the way, I’ve answered the question, ‘Who Wrote Shakespeare?’

Who was the so-called ‘secret author’ who reliably fed texts to Shakespeare?

And I’ve captured the tools you need in order to join the Shakespeare quest.

My purpose with this book is to share the excitement of the search and to enlist you in it.

The book will tell you what to look for, and how to look when you go home and check your shelves.

The idea of finding rare things is not as unlikely as it sounds.

A few kilometres from here, about two years ago, I found two George Chapman quarto plays, dated 1625, finely bound and sitting quietly on a bedroom bookshelf.

They are now two of the treasures in the State Library of Victoria.

My book also traces the tradition of Shakespeare frauds.

I’ve been able to place some little-known frauds in the broader tradition of Shake-Fakes.

Examples include Hugh Junor Browne’s 1898 pamphlet, The Baconian Authorship of Shakespeare’s Plays Refuted, in which Browne reveals that Shakespeare composed his plays while under the control of poetic spirits, and that he scribbled down the texts on the hides of freshly skinned sheep.

Another example is the Shakespeare hoax perpetrated by Hesketh Pearson and Allen Lane, in which Kaiser Wilhelm argues Shakespeare must have been German.

This book gives you the tools you need to spot future Shakespeare frauds, and it places some of the most egregious authorship studies in the tradition of hoaxes.

That tradition includes Owen and Gallup’s mechanical ‘Wheel of Fortune’, which they cranked in order to detect secret messages in Shakespeare’s works.

Speaking of cranks, most Shakespeare sceptics are misguided, but not all of them.

This is a dangerous thing to say, but the tradition of Shakespeare scepticism is legitimate and well founded.

It is not just about snobbery or ignorance.

There are grounds to think Shakespeare is at least partly a hoax.

There are major gaps in the documentary record, and the key early edition of Shakespeare, the First Folio, is unreliable in several important respects.

It was produced by printer-publishers with a track record of fraud and piracy, and the book itself is misleading.

Other early falsities include the infamous False Folio, and the speculative dedications in Shakespeare’s first published works.

Scepticism is legitimate and useful—until it becomes obstinate and ridiculous, like most climate-change scepticism.

Most sceptical studies of Shakespeare are lurid fictions; nonsense dressed up as fact.

But even the false writings of heretics are fascinating and worthy of study.

They tell us much about Shakespeare: how he is viewed, his importance, and what we’d like to believe about him and his work.

And scepticism in general has served a valuable purpose of keeping the mainstream honest.

My conclusion, in answer to the authorship question, is this: Shakespeare authorship is not a hoax, but it is hoaxy.

This conclusion, and the steps that led me to it, will no doubt both delight and appal people on both sides of the authorship debate.

But it is also a hopeful conclusion.

This book provides a means for the heretics to come back in from the cold; to join the mainstream, share discoveries and celebrate the universality of Shakespeare, who, like this cover, is a mirror to us all. 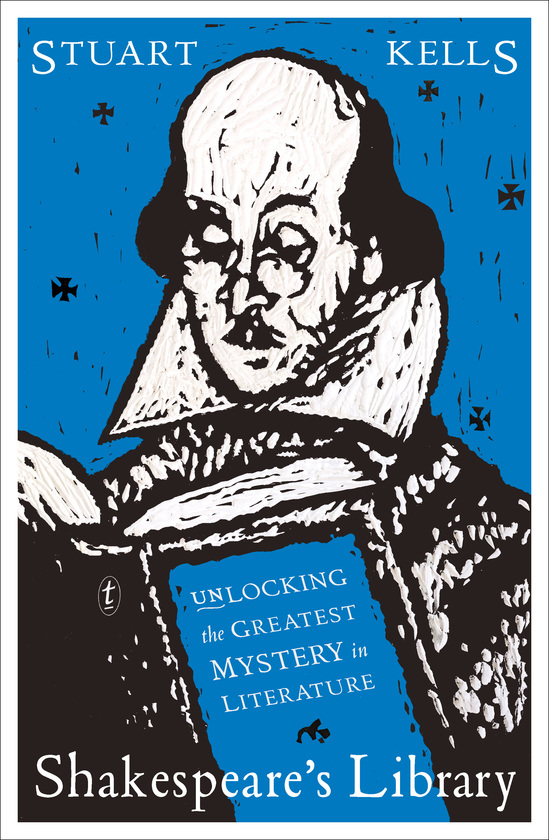 To learn everything there is to know about all the above, get hold of a copy of Shakespeare’s Library: Unlocking the Greatest Mystery in Literature now from all good bookshops, the Text website (free postage) or as an ebook.