When Danielle Wood asked me to speak today she said keep it light and fun.

But when it comes to Marjorie Bligh, I’ve already made that mistake and won’t be repeating it.

Last month in Canberra I told some friends I would have the honour to launch Danielle’s book.

Being from other states they’d never heard of Marjorie, so looking to amuse them I explained she was a doyen of household hints who recommended putting slices of garlic in children’s socks to prevent whooping cough.

‘Rodney,’ one said gravely, ‘you do realise that chemists charge heaps for little bags of herbs meant to keep you healthy by being put in your socks?’

I didn’t, and I checked and she was right.

I really have no excuses for making light of Marjorie Bligh home hints.

I spent my childhood on a farm near Sheffield where it seemed everyone owned and regularly consulted books by Marjorie Bligh.

In my adolescence I lived no more than 200 metres from Marjorie’s home in Devonport, a town in which her words and example were taken very seriously by those seeking to maintain a link with their past.

Now, as a grown man wondering how I might weather the world’s economic instability, I think twice before throwing out old things and wonder if Marjorie might have some hints for repairing and maintaining them.

But to me, even more important than the practical use of Marjorie’s hints is what her work and life says about us as Tasmanians.

On almost every page of Danielle’s book there is a reference to something I recognise as peculiar to older Tasmanians, something which Marjorie Bligh may have taken to a new level but which has been common and unique to our shared heritage.

It might be something as simple as a cake recipe or how to name a house, or as puzzling as a preoccupation with newspaper clippings.

It includes the way Marjorie tells stories through unlikely digressions and the gathering together of unrelated odds and ends into a sprawling narrative as baroque as a Flanagan novel.

It certainly includes Marjorie’s strong sense of who she is and where she belongs. 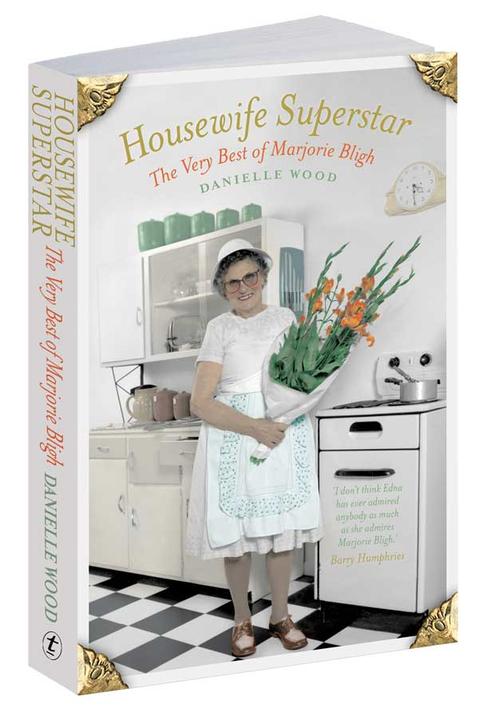 In recent days the Sydney press has puzzled over research which shows Tasmanians are the happiest people in Australia.

One expert put it down to exercise in natural settings, which seems to me far more fanciful than any of Marjorie’s health hints.

My explanation is that we are happy because we are more likely to know who we really are and to be content with that.

In common with Marjorie, Tasmania comes from unprepossessing origins into the world that doesn’t care much for what makes us special. This in turn gives us an opportunity to construct who we are and be in control of what we have built. We are under fewer illusions about the meaning and value of our lives.

The final and most important thing other Tasmanians share with Marjorie was revealed to me on a recent visit to MONA.

The Victorian friend I took there declared it a monument to David Walsh’s ego.

I was astounded. ‘If this place was about ego,’ I said, ‘it would be in Melbourne or Los Angeles or somewhere that would attract more attention. Instead, it is here in humble Hobart where David Walsh grew up.’

Hobart would have been a tight fit for a man of Walsh’s intellect and vision. It is a place where people would not always have appreciated or understood him.

But it is his place and we are his people and he has given us all this gift, for free, unconditionally.

This is an act of love.

In exactly the same way, Marjorie Bligh’s many books are anything but an act of ego.

They are about her readers, not her.

They are an act of love for an island people who have not always appreciated or understood her, who were sometimes too indolent, brutal, petty and small for her, but with whom she shares an indissoluble bond and to whom she owes so much of who she is.

Like Walsh, Flanagan and so many other Tasmanians, Marjorie Bligh is too big a personality to fit easily here, but she also has too big a heart to retreat to other places or into herself.

Instead she casts her immense creativity, originality and insight to the world come what may.

Danielle understands that Marjorie’s work has an importance beyond home hints.

She does not let herself get snagged on the difference in their ages or their values, as a shallow biographer might.

Her careful research and her fine prose style shows she takes her subject very seriously indeed.

As a result, this book also becomes a gift of love not just to its ostensible subject, Marjorie Blight, but to its other hidden subject, Tasmania.

Danielle, congratulations on another fine book, one that preserves the fruits of Marjorie’s work as well as the best-made jam, and is a better medicine for our weary souls than any amount of sliced garlic.