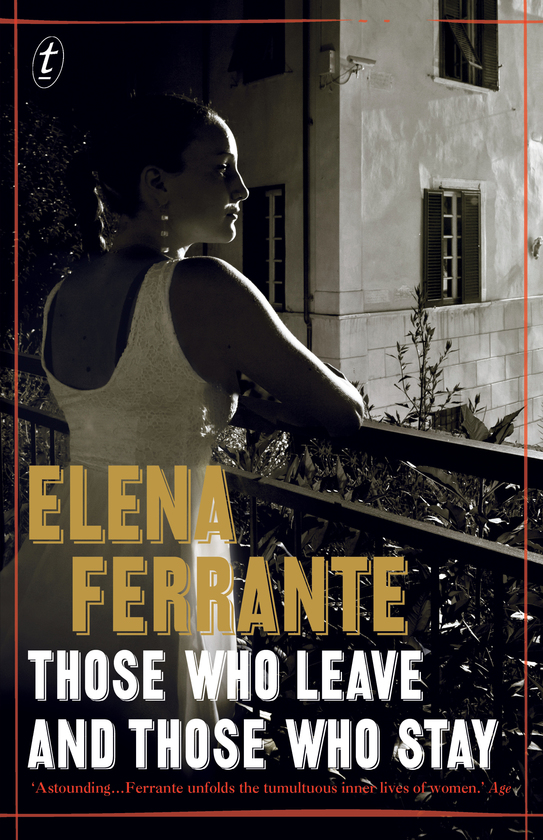 Those Who Leave and Those Who Stay

Oprah.com says of Ferrante's 'deliciously addictive Neapolitan series' that the books are 'thrilling in the way they probe how a childhood attachment can live on to shape, twist, and threaten to destroy us, even as our paths and personalities diverge.'

'In the past decade, no fiction writer has made it more necessary to think about the performative aspect of being a woman than Elena Ferrante,' says Barnes and Noble Review. 'Her novels, written originally in Italian and translated beautifully by Ann Goldstein, are ferociously engaged with the ways in which a woman—as a daughter, a teenager, a lover, and, most dramatically, a mother—is a kind of person in drag, speaking through a costume that slowly becomes all that one knows of her...It’s Ferrante’s ability to capture both the mirror and the woman standing before it that makes her a writer to be reckoned with.'

The Neapolitan series is 'almost Tolstoyan in its sweep and ambition,' says the Independent. '[The books] are, into the bargain, extraordinarily gripping entertainment; the plot in this latest instalment twists and turns, like a Naples alleyway, towards a sequel-enabling conclusion. Novel by novel, Ferrante’s series is building into one of the great achievements of modern literature. '

'The Neapolitan novels are something else, an altogether different order of art,' says the New Republic. 'When this viscerally populated epic is complete it will give us what readers want most from prose fiction: a full world.'

'Ferrante captures the unnerving and beautiful elements of human relationships with vivid precision and dramatic seriousness,' says Acacia O'Connor at Three Percent, making the case that Ferrante's books are more universal than descriptors like 'a great feminist work' might suggest.

The Smart Set considers Ferrante's Neapolitan series in the context of the local 'neighbourhood, Naples and the broad landscape of Italian cities, all in tension.'

'Learning to read is to see the magic in words.' A rare Q&A with reclusive author Elena Ferrante.

The Guardian explores the mystery of Ferrante's identity.

Ferrante has inspired 'a new breed of literary girl-crush', says the Cut at New York Magazine.

My Brilliant Friend, The Story of a New Name and Those Who Leave and Those Who Stay are available now in bookshops and online. The fourth book in the Neapolitan series will be published late 2015.