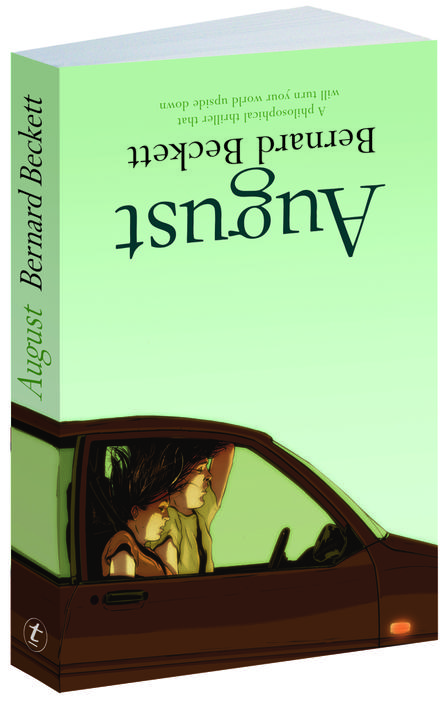 Congratulations to WH Chong, whose design for Bernard Beckett’s August has been shortlisted in three categories in the 2012 APA Book Design Awards.

Part philosophical thriller, part love story, August is a compelling novel of power, humanity and desire. Trapped in a car wreck, upside down, bleeding, broken and in pain, Tristan and Grace are staring at death. As they await their fate, with only a glimmer of hope they might be seen and rescued, we discover the stories of their lives, the sequences of events that brought them together and the shocking truth behind the cause of their crash.

We asked our august designer a few questions about the process behind this incredible cover.

Where did the inspiration for the design come from?

As I try to do each time, I read the manuscript. The idea offered itself within two pages. So, concept follows content. (But it was the kind of book which I read all the way through.)

August was published for both adults and younger readers. Are there particular design difficulties with such a broad brief?

Yes. The past is a foreign country and young people don’t go there.

Let me put it this way: for boomers, Joni Mitchell and Neil Young still seem alluring; for slightly younger folk, they regret their days among the Sex Pistols and Depeche Mode; then we have a long gap with, eventually, even younger folk emoting to Nirvana and various shoegazers; and suddenly it’s entirely hip hop and gangsta rap. I don’t know anyone who listens to Joni and D Mode and Snoop Dogg. But then, again everyone listens to ancient Lenny Cohen, so maybe you just have to go extreme classic.

What do you think of the UK edition of August, which used the same image but turned it upside down, losing the visual pun?

Are your cover designs now influenced by a consideration of how the book will appear in e-format?

August by Bernard Beckett, available now from Text Publishing and at all good bookstores.