Your basket is empty
Shopping Basket
Review and Check Outright
How to Paint a Novelist by W. H. Chong
Posted on 27 October 2015 under
Tweet thisShare on Facebook 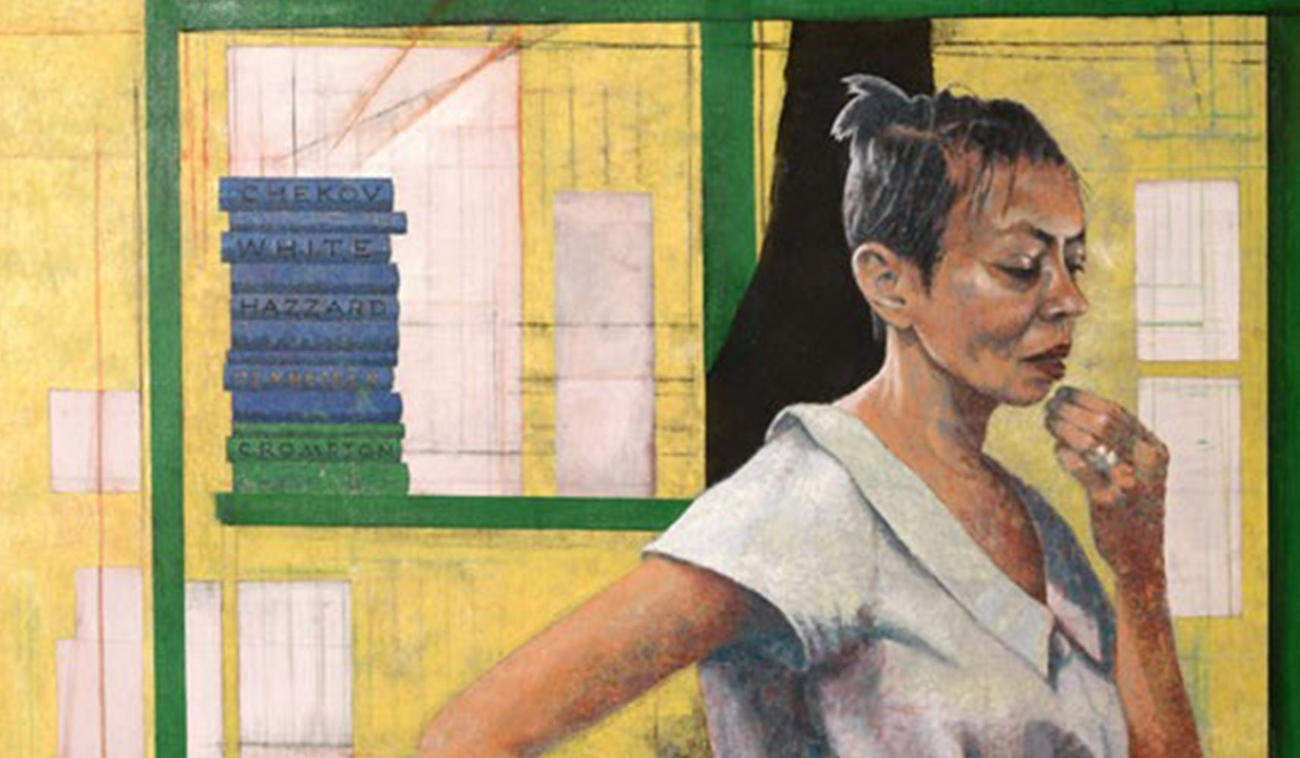 Detail of the portrait of Michelle de Kretser

W. H. Chong is Text Publishing’s design director. His brilliant portrait of Michelle de Kretser was acquired by the National Portrait Gallery in early 2015. This post is adapted from an original piece on Chong’s blog, Culture Mulcher, at Crikey.

Artists are always joking about their work.

In May I saw the impressive and joyous exhibition, ‘Sargent: Portraits of Artists and Friends’ at the National Portrait Gallery in London. John Singer Sargent was a great if reluctant portraitist who made stellar paintings of the rich and famous. In between despised commissions—which rewarded him richly—he would go on excursions and paint pictures of artist-friends painting, dashed off with virtuosic élan in situ. These works have a palpable ease and camaraderie—the affection between friends—impossible and inappropriate within the grand manner of his society portraits. 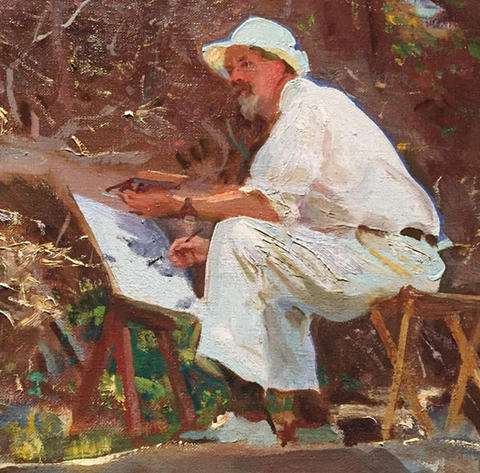 Another joke: ‘Every time I paint a portrait I lose a friend.’ Of course, a portrait commission doesn’t involve friendship. But the implication is clear, which Sargent makes explicit in a challenge to his sitters: ‘I do not judge, I only chronicle.’

The great Ingres also complained about portraiture: ‘Cursed portraits!’ he wrote a friend in 1847. ‘They always keep me from undertaking important things...for a portrait is a difficult thing.’ A student of his noted that a portrait drawing would take Ingres a full four hours, split between morning and afternoon.

Beyond Sargent’s caution, sitting for a portrait is a mental and physical challenge—being silent and staying still. ‘Sit like an apple!’ commanded Cezanne. ‘Does an apple move?’ Ingres may have taken four hours for an exquisite drawing, but Lucian Freud required 120 hours over three months for a small head of David Hockney in oil. Sitting: being scrutinised. The lurking suspicion or assumption that a portrait is also an opinion, visible evidence of what the artist thinks of you.

Of course you shouldn’t always trust what artists say about their work; and even less should you trust what critics say about artists. As William Goldman said about Hollywood, ‘Nobody knows anything.’ He meant, nobody knows what will work until it does, and we all know that a row of critics will often laud and trash the same film. So let’s say a portrait is a picture with something wrong, but we can’t agree which bit it is. We must look first before listening, then return to looking. 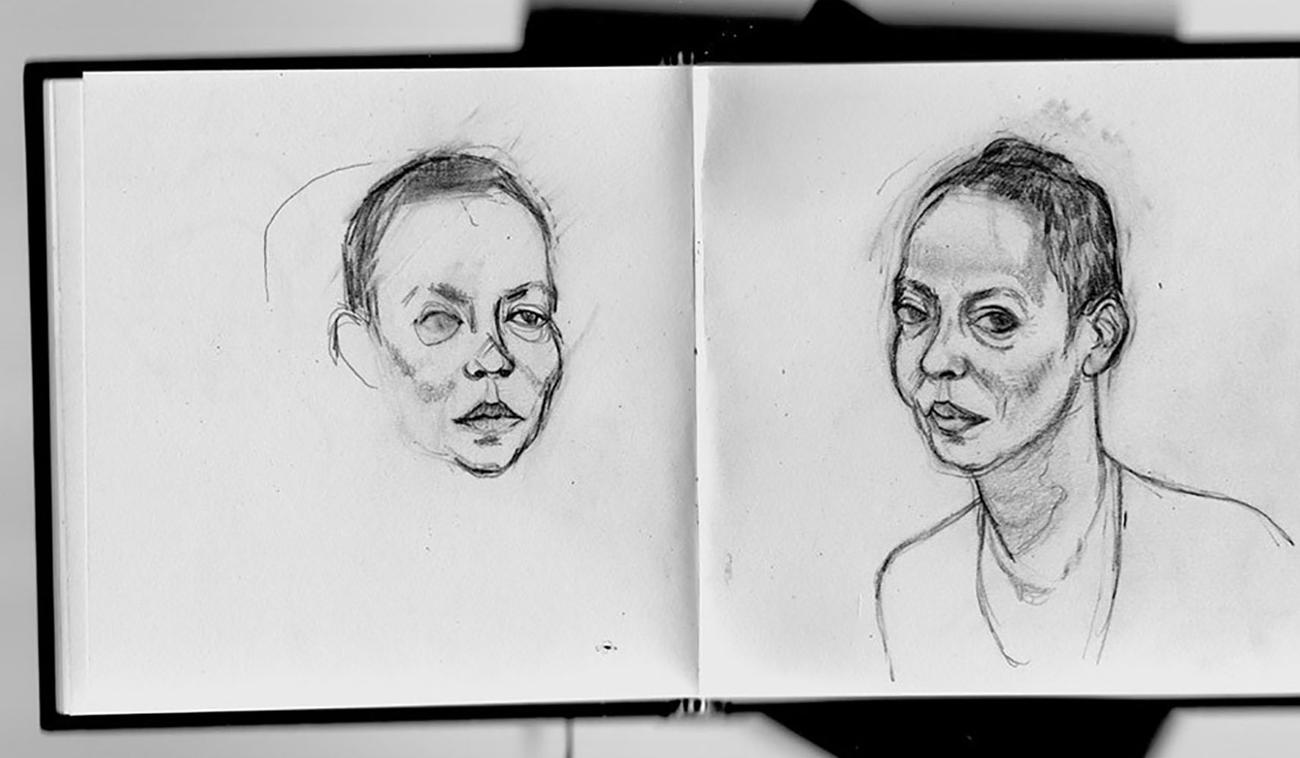 In 2013, I worked on a portrait of Michelle de Kretser, whose superlative novel Questions of Travel swept most of that year’s literary awards. It was radioactive with acclaim, scoring eight major prizes (including the Miles Franklin, the ALS Gold Medal and the Prime Minister’s award) and being shortlisted for another seven. Michelle is an old friend so I suggested it was time she had her portrait done, an itch I had wanted to scratch.

Photography, and then digital media and photoshop have opened all kinds of approaches to portraiture, not least that many painters use photos of their subjects as their main source material. Well, I like to paint, so that’s the medium I chose, though it included several very contemporary techniques—such as spray cans and stencils, just like your neighbourhood graffiti artist. The only rule I followed is that the painting shouldn’t end up looking like a photograph, because I don’t want to spend all those hours only to deliver visual redundancy.

As we live in different cities Michelle couldn’t sit for me, as I knew the picture would take a while. We spent a few days together in Sydney where I made drawings, took snaps with my phone, jotted colour notes and compositional ideas. Walked the dogs and talked.

I always knew it would be more than an image of head and shoulders—that it would incorporate narrative elements, that it would have layers of references and be dense with allusions. It would be quite large, 2m x 1m. An early draft shows a seated figure with books and shelves, laptop and dog, palm tree and brugmansia. The naturalistic backdrop fell away and it finally became a standing figure. Michelle’s interesting smock-dress was the one she had on when I arrived. 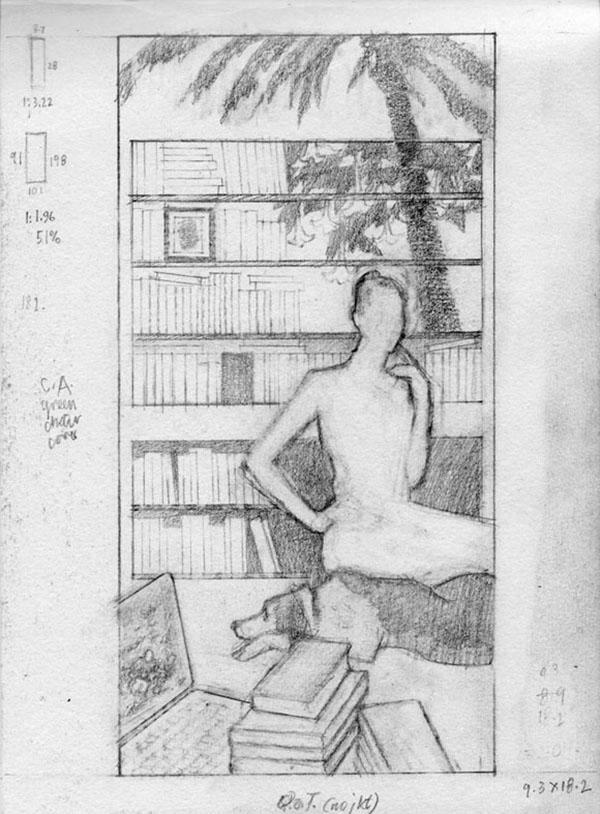 For what it’s worth here is my artist’s statement: ‘Michelle de Kretser, Geography and History’.

Reading Michelle de Kretser’s novels, I am always drawn to the ways the characters are shaped by their history and changing geography. This portrait makes some allusions to the author’s own passages.

The non-naturalistic compositional device, the fusion of abstraction and figuration, also nods to the post-modernist mode evident in de Kretser’s writing. The dominant scheme of green and gold has as much to do with ‘Australia’ as with her hot and distant birthplace of Sri Lanka (whose flag actually includes stripes of green and gold). The palm tree and schematic bamboo blinds refer to tropics past but also to her home in the new tropics of Sydney, after many years living in Melbourne. The book stack names writers who have affected her, including Patrick White, who is the tutelary spirit in the painting, seen top left. 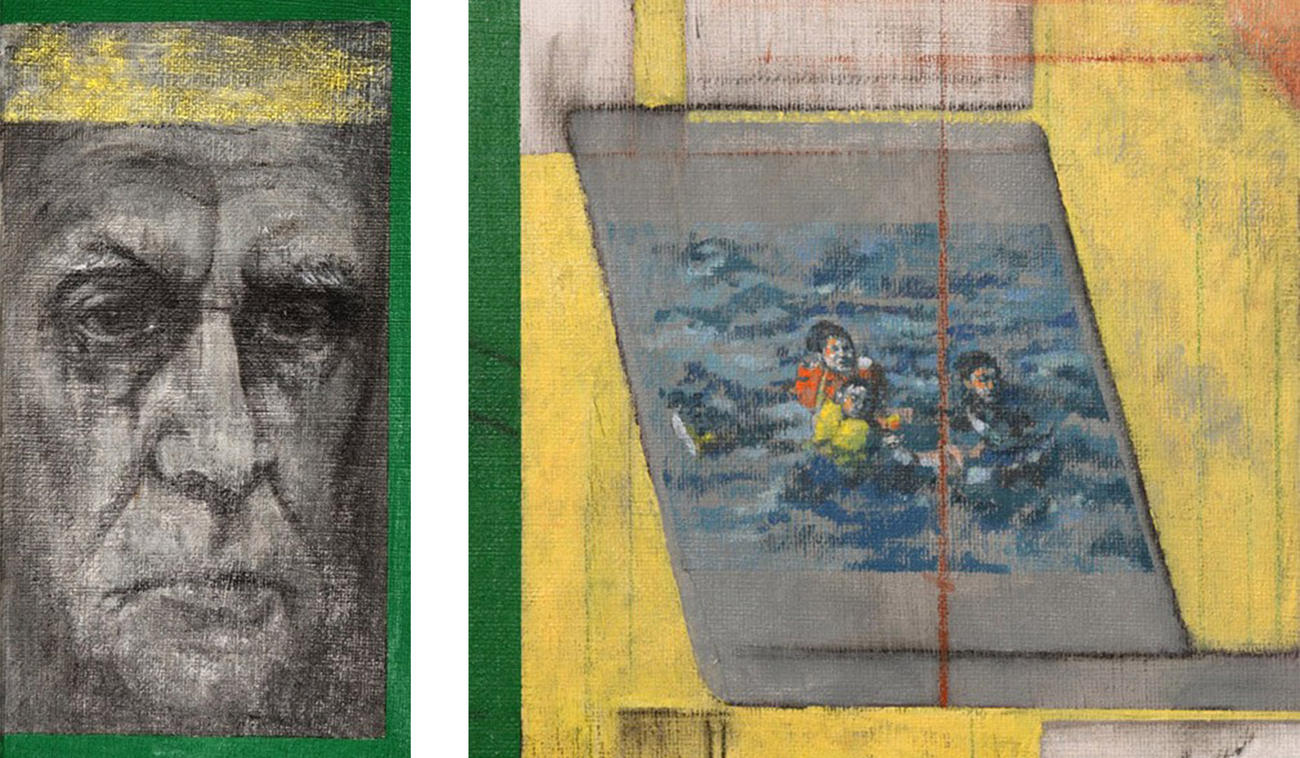 The screen image on the laptop is derived from the notorious photos of the Children Overboard affair in 2001, the kind of problematic ‘voyage’ informing de Kretser’s Questions of Travel.

Books have pictures, too—so the dog shape at the base of the picture is a quote of Deborah Williams’ etching used on the original cover design of de Kretser’s The Lost Dog (there are often dogs in her books). The palm tree is a quote from the cover of a novel about the dark side of Sydney life—Down in the City by Elizabeth Harrower; Harrower is an author admired by de Kretser.

Beyond all that description and scene-setting there is the question of atmosphere and expression. Here, it’s best for people to decide for themselves. A friend thought the Michelle portrayed looked like someone who had seen life and suffering, who was within intellectual and spiritual restraints. Another felt that she was searching inwards, turned away from the rest of the picture. But that’s the thing, our readings of others are individual and contingent. Not all of us are artists, but we all make our own portraits of other people.

So my sister was visiting from overseas a few months ago and we drove up to Canberra to see the picture. It’s right at the front of the main gallery on a wall with writers—to its right are Rick Amor’s Shane Maloney, and Kristin Headlam’s portrait of her partner, the poet Chris Wallace-Crabbe. On the facing wall are portraits of three musicians; a nice juxtaposition. (Two of these pictures have since moved, replaced by two other men!) My sister made an acute observation: ‘There are eight portraits in this room—and only one is of a woman: Michelle.’ Notwithstanding, she loved the whole setup, and at the end we had to drag her away from Gallery Seven with its exhibit ‘Women in Focus’, where there is nary a man in sight. 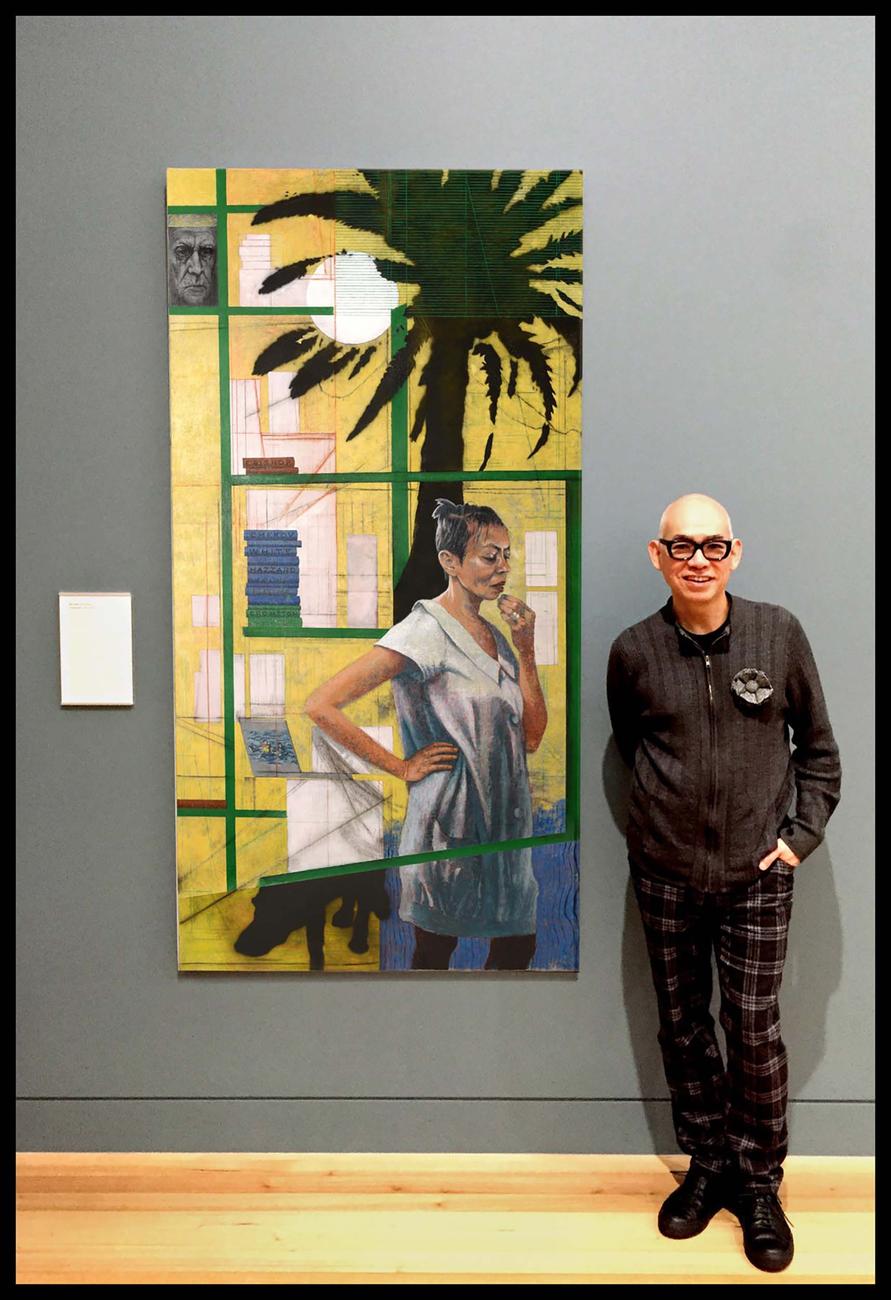 The artist and his portrait of the author