Gerald Murnane read Diego Marani’s unforgettable New Finnish Grammar, and was moved to write to us with his thoughts. He’s kindly allowed us to post his letter here. 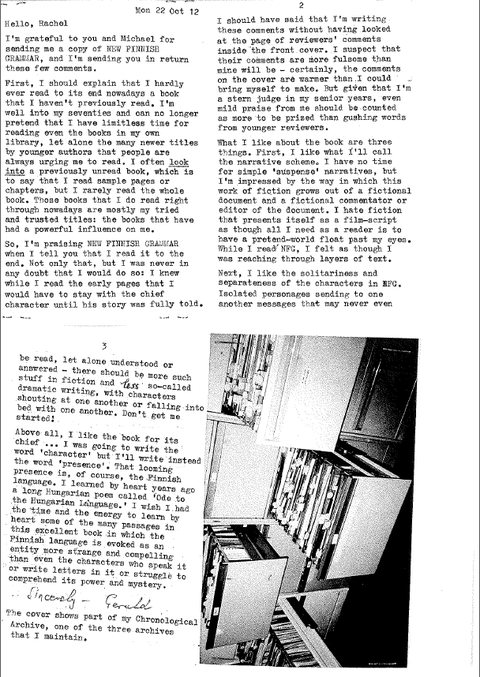 I’m grateful to you and Michael for sending me a copy of NEW FINNISH GRAMMAR, and I’m sending you in return these few comments.

First, I should explain that I hardly ever read to its end nowadays a book that I haven’t previously read. I’m well into my seventies and can no longer pretend that I have limitless time for reading even the books in my own library, let alone the many newer titles by younger authors that people are always urging me to read. I often look into a previously unread book, which is to say that I read sample pages or chapters, but I rarely read the whole book. Those books that I do read right through nowadays are mostly my tried and trusted titles: the books that have had a powerful influence on me.

So, I’m praising NEW FINNISH GRAMMAR when I tell you I read it to the end. Not only that, but I was never in any doubt that I would do so: I knew while I read the early pages that I would have to stay with the chief character until his story was fully told.

I should have said that I’m writing these comments without having looked at the page of reviewers' comments inside the front cover. I suspect that their comments are more fulsome than mine will be—certainly, the comments on the cover are warmer than I could bring myself to make. But given that I’m a stern judge in my senior years, even mild praise from me should be counted as more to be prized than gushing words from younger reviewers.

What I like about the book are three things. First, I like what I’ll call the narrative scheme. I have no time for simple ‘suspense’ narratives, but I’m impressed by the way in which this work of fiction grows out of a fictional document and a fictional commentator of editor of the document. I hate fiction that presents itself as a film-script as though all I need as a reader is to have a pretend-world float past my eyes. While I read NFG, I felt as though I was reaching through layers of text.

Next, I like the solitariness and separateness of the characters in NFG. Isolated personages sending to one another messages that may never even be read, let alone understood or answered—there should be more such stuff in fiction and less so-called dramatic writing, with characters shouting at one another or falling into bed with one another. Don’t get me started.

Above all, I like the book for its chief…I was going to write the word ‘character’ but I’ll write instead the word ‘presence’. That looming presence is, of course, the Finnish language. I learnt by heart years ago a long Hungarian poem called ‘Ode to the Hungarian Language.’ I wish I had the time and the energy to learn by heart some of the many passages in this excellent book in which the Finnish language is evoked as an entity more strange and compelling than even the characters who speak it or write letters in it or struggle to comprehend its power and mystery.