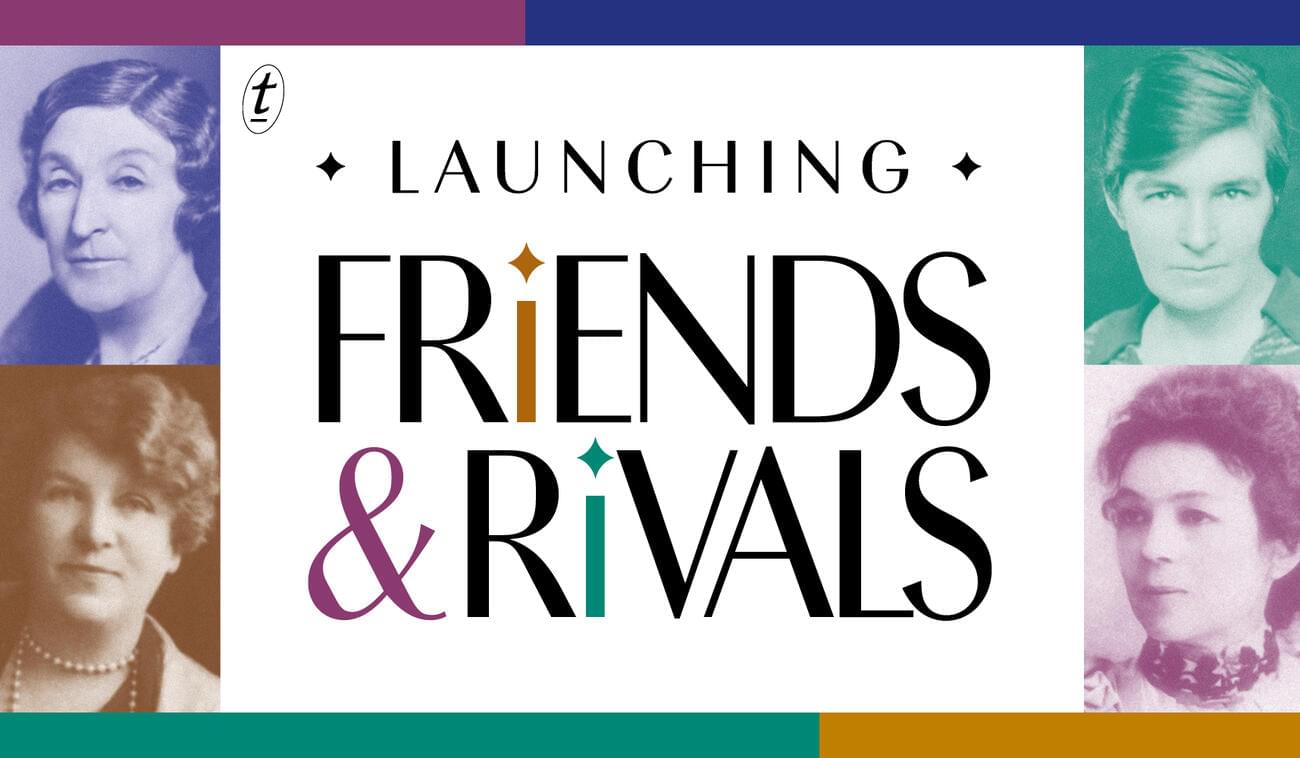 We might not be able to attend glitzy launch parties and rub shoulders with...well...anyone, but we can still enjoy wise words in support of our wonderful authors’ new books – like Dr Frances Devlin-Glass’s launch speech for Brenda Niall’s Friends & Rivals: Four Great Australian Writers.

I count myself lucky that among those who taught me Australian Literature were two very impressive women: Judith Wright (she was at the time writing Preoccupations in Australian Poetry, so was full of the poetic tradition) and Dorothy Green, both fiercely conscious of their gender but manifesting it in different ways. Dorothy Green was my PhD supervisor. One of the pungent observations (she was quite a magisterial pronouncer of positions) I remember her making in the early 1970s (long before second-wave feminism became a transformative force) was that the interwar period was miraculous for women writers because of the numbers of male writers lost to the war. I’ve often mentally returned to that observation in reading Brenda Niall’s latest book. Certainly, there was a wonderful crop of women writers in the ’twenties and especially the ’thirties. At least three of the four whose biographies feature in this work. What we see, even before the war, however, are female novelists creating in fiction the rise of the New Australian girl—feisty, independent, wilful, confident, refusing her gender. This began much earlier around the turn of the century and a bit later, with Ethel Turner and Miles Franklin. Where did that impulse come from? You’ll find out reading this book. Oversimplifying, it had a bit to do with failed marriages and single mums, and self-sacrificing men. This book sketches a very wide canvas, much broader than just the war, in accounting for a highly significant shift in women’s literary culture and Australian literary culture more generally between about 1900 and 1960.

This book is beautifully constructed, a bit like a Celtic knot: each particular biographical strand dealt with earlier in the chronology, reappears unexpectedly later in another woman’s story. And occasionally, other women, not central to the core group of four, crop up, like the unlikeable Louise Mack in more than one biography, and Olga Roncoroni. Maybe my Celtic knot metaphor has even more resonance than is at first is obvious, in that three of the four have strong family connections with Ireland and its nascent literary revival, which does from time to time, feature in this narrative as a parallel nationalist construction of a new literature.

At the level of lived lives, the intertwinings are fascinating: who would have imagined that the imperious Barbara Baynton, with her pretensions to class and even nobility, would have made a friend of the bourgeois Mosman matron and very successful children’s writer Ethel Turner? And, what’s more, enjoyed shopping for diamonds with her? Or that Baynton, social climber extraordinaire, would deploy John Longstaff, an Australian specialist in painting royalty, to paint her portrait because he was ‘good with jewels and decorations’? Or that Turner and her sister had to engage in elaborate stratagems to hide their illegitimacy? Or that both Turner and Baynton would become passionate defenders of unmarried girls keeping their babies? Or that the regally aloof Henry Handel Richardson, who delighted in concealing her identity as a woman on paper, could be so tremulous and pathetically dependent on her husband that his late arrival home would have her scouring the university colleges for him? And who, moreover, smoked cigarettes? Or that Turner and Baynton and the socialist Nettie Palmer might have voted in favour of conscription? The proliferation of such quirky biographical detail in these narratives is delicious. It is a penetrating and nuanced study of the ways in which the life of a writing woman could take weirdly varied forms.

The women of this era were flying blind in the face of a culture that didn’t really expect them to be successful as writers, indeed, to be anything more than ‘dreamy’ girls, ‘brooding on squatters’ verandahs, or mooning in selectors’ huts’ (as A. G. Stephens of the Bulletin dismissively styled Baynton and Turner). Far from it, they were inventing their own modus vivendi (there were no templates), living in cities, and in Ethel’s case, riding a bicycle and surfing (both markers of the New Woman), but despite ‘doing feminism’, Turner was not invested in feminism – she was not a suffragist). Ethel Turner, her sister Lilian and Richardson all began compulsively writing as schoolgirls. Ferociously hyperactive and hardworking in pursuit of their art, they were not always satisfied in the niches they created for themselves. Brenda Niall paints an Ethel Turner who churned out a book a year from 1894 until 1920 for the young-adult Christmas market, and wrote newspaper columns for kids, because she needed to generate the lucre while her barrister husband slowly (twenty-five+ years later) came into his own. Given her druthers, she would much have preferred to have been writing for adults: the annual grind was the price of success.

Both she and Henry Handel Richardson yearned to have a freer hand than their British publishers allowed. Because the beating heart of the publishing world was not Sydney or Melbourne, but London, many of these writers were subjected to imperial censorship. All of them were bucking the system in some way or another: Ethel Turner’s comments on Aboriginal dispossession were censored; Baynton in despising Lawson’s sentimentality subverted a homegrown but nonetheless prestigious bush tradition; HHR was constructing the dark side of the gold boom and ‘Marvellous Melbourne’; and Nettie Palmer refused the metropolitan centre of imperial and literary politics, London, and is responsible for Aust Lit eventually becoming a canon in its own right, and taught around the world as well as in Australia.

The first three biographies make a powerful case for the need for a Nettie Palmer, the subject of the fourth biography. With Vance, her husband, as a critic and advocate rather than a fiction writer, she did much to fashion Australian Literature as an institution, and to challenge the prejudices of a London-centric publishing industry. Nettie’s indefatigable work in print and on air were crucial in building a sense of Australia as having a culture. Speaking as an Argonaut of the 1950s, who adored home-grown radio plays on the ABC, and who chose a career in Australian Literature against the best advice, I can testify to the Palmers’ foundational work. Nettie Palmer needed Vance, but was to become a power in her own right. Not that all the artists featured in this book were unequivocally supportive of Nettie’s advocacy of their work: HHR envisaged herself as in the European tradition of Flaubert and Dostoevsky rather than bush nationalism, claiming loftily to Norman Lindsey, who saw her as a literary Streeton, that she ‘merely wanted to write a book about Australia that had no bushrangers in it’. She was quite resistant to the kind of literary nationalism of the type the Palmers were constructing, but of course was by then a key figure in the tradition. Despite this, she was not above colluding with Nettie to be advanced for a Nobel prize that never eventuated. It’s fascinating to find Nettie being unimpressed by the first two books of the trilogy, The Fortunes of Richard Mahony, and subsequently publicly and radically revising her opinion in the light of the third.

This work is ambitious and unique in its conception. It’s a collective biography which is humane in the way it documents the day-to-day realities of writing women, their rivalries and their unexpected friendships; it is also scholarly, carefully and judiciously sifting the evidence and quietly challenging accepted readings; it is also literary, reading the works of these four writers for insight into their orientations, and as well reading them in terms of the conditions of production and reception. And it’s supremely lucid, a delight to read, and a page turner. It’s a book that will appeal, I suggest, to readers of biography as well as readers of literature, and it may send a new generation back to some of the iconic works of a tradition that took a long time to stand proudly and owes so much to its self-effacing women practitioners.

It’s my pleasure and privilege to congratulate Brenda Niall, and to declare Friends & Rivals launched. 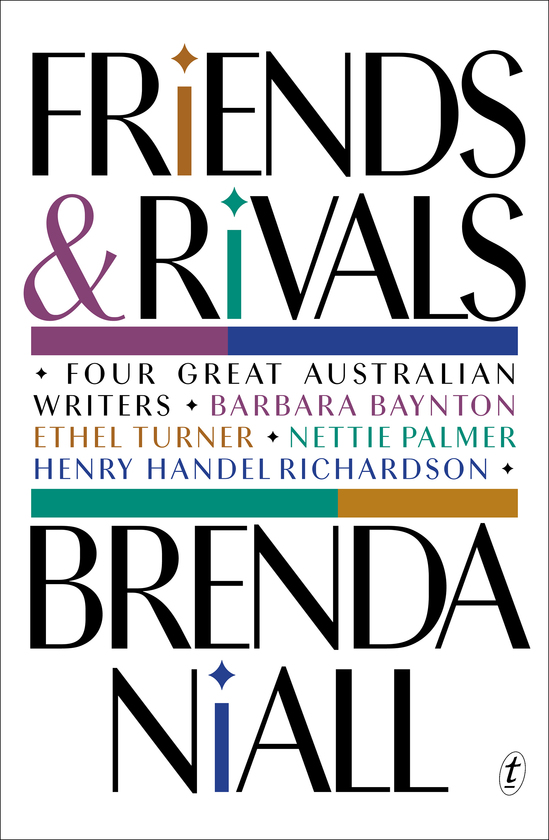