Your basket is empty
Shopping Basket
Review and Check Outright
‘Tremors across Still Water’: Margo Lanagan’s introduction to The Watcher in the Garden
Posted on 27 May 2013 under
Tweet thisShare on Facebook 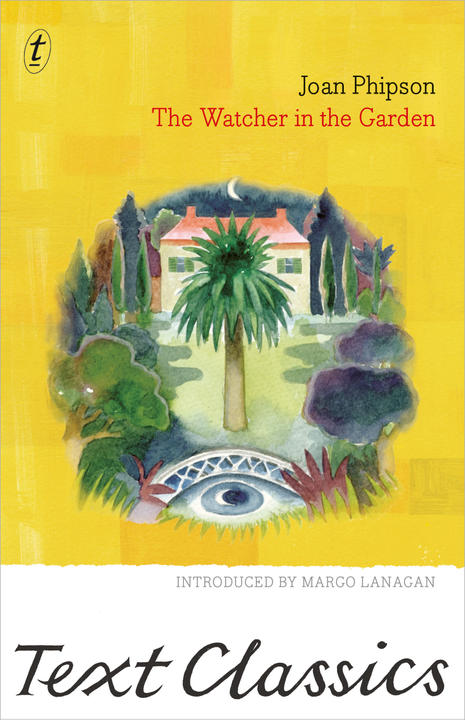 We recently republished Joan Phipson’s The Watcher in the Garden in the Text Classics series. Margo Lanagan’s new introduction to this complex and gripping novel for young adults is reproduced below.

The Watcher in the Garden surprised me. In the 1960s I wandered past Good Luck to the Rider, The Family Conspiracy and Threat to the Barkers on the shelves of my local library; I probably read their first pages but I don’t think I ever took them home to read. I knew Joan Phipson was well-respected, her work undeniably canonical in Australian children’s literature, but I had her filed away in the jolly-hockey-sticks, horse-stories category of my memory.

This book, first published in 1982, didn’t seem to fit the bill:

As she stood there, the tranquility that had lain over the garden since the sun set began subtly to change. It was as if an electric current, small at first, but gaining strength, were charging the evening calm with something less peaceful, less secure. And a small breeze, sent up from the gorge by the cooling air, began to play among the hanging leaves so that they hissed and whispered among themselves, and the surface of the pools darkened as it passed. The breeze went on its way, but the leaves continued to hiss and whisper and, if there had been anyone there to see, he would have noticed that the surface of the shadowed pool below where the girl was standing remained ruffled for some time. The current, vague though it was, silenced the ordinary little sounds of evening. It originated, or seemed to originate, inside the skull of this fifteen-year-old girl. Her head, at this knife-edge moment, was tumultuous with thoughts wild, violent and black.

There’s not a single horse or hockey stick here, and it’s not at all jolly. But it builds from this tantalising moment into what I’ve since learnt is a typical late-Phipson exploration, considered and deep, of two young people’s mental and emotional landscapes. And no reader can be in any doubt that Watcher is a fantasy story, from this first frisson of unnatural hiss, whisper and rufflement.

Phipson almost always set her stories in Australian landscapes, lovingly detailed. From the beginning she was interested in firmly establishing a story’s setting, and the longer she wrote, the more confident she grew in foregrounding a setting’s Australianness and its place in a historical continuum. ‘Little by little,’ she wrote, looking back in 1989, ‘I have been working towards the theme that now occupies me (I could really say “possesses me”)…It is, roughly speaking, man’s relationship with the earth he lives on and with the universe about him.’

The garden of The Watcher in the Garden is based on The Everglades, a National-Trust-managed property in Leura, in the Blue Mountains of New South Wales, established in the 1930s and still open daily to the public. The place ‘seemed full of dramatic possibilities,’ wrote Phipson, ‘with its surroundings of deep blue gorges and long, rather barbaric views.’ In the novel, the garden is still being wrested out of the natural landscape, and it is never content to serve merely as a backdrop to the characters’ exciting adventures. In the very first paragraph it asserts itself: ‘For all its quietness it pulsed with life, rang out even—a strong note in the fading diurnal harmony.’

And this life continues to pulse, and occasionally even to enter the fray, throughout the narrative. There are strictly speaking two watchers in the garden, as well as the owner, who is acutely, almost preternaturally, aware of what goes on there, but the garden itself also comes very close to sentience in this strange story. At first it only imparts a mood—hostile, then ‘healing and kind’—to the protagonist Kitty, but then its influence brings forth latent extrasensory powers in both her and Terry, the youth who sets himself up as Kitty’s and the garden’s enemy; and then it begins to meet Terry’s hostility with a series of ‘little accidents’.

I do not now remember why I chose the two main characters, and I think the plot tended to develop as I wrote it. I do know that it turned out rather different from what I had originally intended. So often a developing character will change the course of a plot.

The novel’s core encounter is between a middle-class child—the bank manager’s daughter, unsociable, always-angry Kitty—and a less advantaged and educated antagonist, whose father is on a war pension and who is himself on the dole. The story is fuelled by its author’s curiosity about what their differences entail, although she doesn’t quite frame this in terms of generalisations about class. Throughout, her focus remains tightly on the individuals, their shifting relationship, their subtle power plays.

Both these young people carry a burden of emotional turmoil—a ‘violence’ they find difficult to express appropriately, and the sense that there’s something missing in them. ‘How could she explain,’ wonders Kitty, ‘the feeling that was always there, that inside her there was and had always been a gap waiting to be filled?’ And Terry’s mother tells him outright, ‘Sometimes I think something got left out of you when you was born.’

Their respective searches for their missing piece bring them to the garden, Kitty for solace and Terry with evil intent towards the owner Mr Lovett. There the two watchers creep and cross paths and conceal themselves from each other, but while Terry also keeps himself concealed from Lovett, Kitty is discovered by the old man early on, and they form a friendship that helps her begin to control her impulses and civilise herself.

As our knowledge of Kitty and Terry and Mr Lovett increases and becomes more loaded with anxiety, the garden develops as the perfect metaphor for the civilising process. Phipson mostly describes it in terms of its introduced trees, for they show best the seasonal changes throughout the story, but they also demonstrate the principles of order and control that Kitty is having such trouble learning, and the idea of promoting desirable qualities over instincts and impulses. Always the wilderness presses in at the edge, and we are regularly reminded that it takes the concerted efforts of a team of gardeners to keep it back. But the rewards of doing so are made clear in the person of their proprietor. Perhaps the closest Phipson comes to giving an explicit moral to the story is when she has Mr Lovett tell Kitty, ‘In my garden I am safe because I am protected.’

‘Words have always been a strong, bright thread in the weaving of my life,’ Joan Phipson wrote in 1989. But it didn’t occur to her to write for children until she was married and had children herself. ‘I am pleased that children like my books,’ she wrote,

As soon as she began publishing, Joan Phipson was a star in a constellation of Australian children’s writers that today looks unbelievably small, if it also shines incredibly brightly. Her assembled works reflect the larger movement of our country’s literature for children, progressing from conventional stories that carefully muted their Australianness to deeper and wider explorations of young people’s inner and outer landscapes. But they also show Joan’s own feelings of Englishness giving way to an acceptance of Australia as her home.

Though these landscapes were most often full-heartedly Australian, Phipson’s work was never parochial. The achievement of personhood, the search for a home in the world and the imperatives of our position as custodians of the planet were her themes. The watchful, thoughtful, questioning and increasingly assured child and teenage characters through whom she explored them are as appealing today as they were when, in her book-lined bunker at ‘Wongalong’ in the New South Wales Central Highlands, she first brought them to life on her typescript pages.

The Watcher in the Garden by Joan Phipson is available in bookshops now ($12.95).