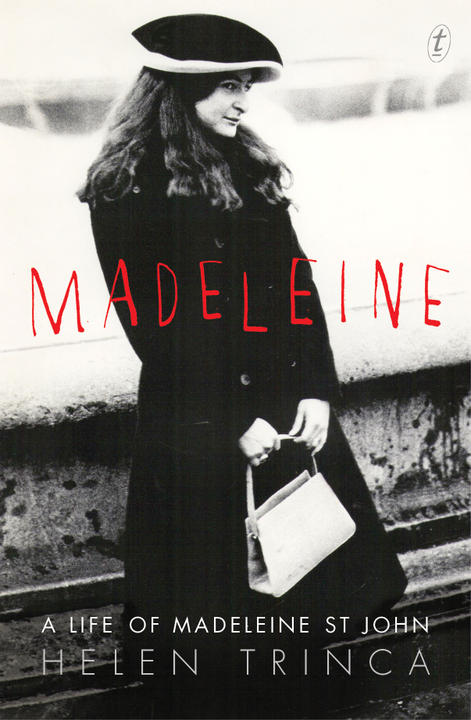 Helen Trinca’s new biography, Madeleine: A Life of Madeleine St John, was launched by Richard Walsh in Sydney last Saturday. His wonderful speech is below.

Towards the very end of her life, Madeleine St John saw herself not as an Australian novelist, but as an English novelist. Nonetheless she did write a deliciously light-hearted Australian novel, set around a group of women quite clearly working at DJs during its heyday, and, of course, she was born, raised and educated in Australia. Many of her family and her oldest friends are here this afternoon.

A very long time ago I went up to Sydney University. I enrolled in Arts, I joined Honi Soit and the Drama Society, and I found myself paddling around in the same waters as The Octopus—that tight-knit group of eight very talented young women who, in the modern parlance, hung out together, as Helen has evoked it in her fine memoir of Madeleine.

I later got to know her father, Ted St John, who was involved in the OZ trial as the QC who defended our printer, Francis James. I was at school with Chris Tillam, although we were never intimates; but I am one of the few people here today who attended the wedding of Chris and Maddy in mid-1965.

Helen’s book is, of course, non-fiction. But if it were a novel, its emotional core would be the highly fraught relationship between Madeleine and her father. This evening I want to say something about Ted and about Madeleine, as I knew them, and as they are revealed in Helen’s enthralling biography.

At a first meeting, you might have guessed that Ted was the son of a clergyman—and he was. He was the fifth child of Frederick de Porte St John, the Anglican rector at St Alban’s in Quirindi. Ted, by the time I got to know him, was a puritan and rather prissy, but at various times in his earlier life he had revealed himself as a romantic with a capacity for impetuosity and a yearning for the unconventional.

In 1939 he had met and become quickly besotted with Sylvette Cargher, whose parents were working-class refugees from Romania and culturally Jewish; Ted’s parents at St Alban’s did take some persuading that she was a suitable wife for their son. When Madeleine was only a baby—according to her birth certificate, she was actually named Mireille—she and Sylvette and Ted lived in a kind of artists’ colony; they later moved to Castlecrag, which then had a reputation as a rather bohemian suburb.

Less than a year after Sylvette died, Ted met on a boat going to England Valerie Winslow, who was ten years younger than him; in a whirlwind romance, the couple left the ship in Marsailles, travelled in Europe and quickly became engaged. At the OZ trial Ted was working pro bono to defend his friend, Francis James, who was a very eccentric Anglican indeed. To say that Ted was a man of contradictions would be a considerable understatement.

The first of Ted’s famous and defining moments in public life was his stout defence of Captain John Robertson, the badly wronged captain of HMAS Melbourne, which had collided with the Voyager. In his first speech to the federal parliament, Ted attacked his own party and argued in favour of a new inquiry into the incident; during this maiden speech, which is customarily heard in silence, he was heckled by his prime minister, Harold Holt, contrary to all protocol. This event revealed Ted as both a man of strong principles and a poor politician, in the pejorative sense of that word.

In his second great intervention in public life, he delivered a harsh moral judgment against Prime Minister John Gorton. In both these instances he revealed himself as a man of unbending moral rectitude, lacking any self-doubt whatsoever and unwilling to countenance compromise or nuance.

In many people’s view such behaviour is totally admirable; for others it is not so admirable. And yet it is clear that his eldest daughter inherited this self-same tendency, although I doubt she would ever have admitted that she was so close in character to the man she so passionately and so often reviled. As a person so fiercely judgmental and so morally rigid, Madeleine, like her father, can be either admired or not, according to taste; but undoubtedly this personality trait was an important ingredient in making her the acclaimed novelist she ultimately became.

Madeleine on the surface was super-confident, but underneath this veneer lurked an enormous self-doubt. She had inherited from her father the idea that she and her family were different from other people. Her father, after all, was descended from Baron St John of Bletso and a succession of Bolingbroke earls. Indeed, I suspect Maddy would have corrected me there and sternly informed me that it was pronounced ‘Bullingbrook’, which of course it is more correctly. Despite her avowed hostility to her father, she was proud of her heritage and of the fact that her family was listed in Debrett’s and in Burke’s Peerage.

Her mother’s seeming Frenchness, which of course was faux, added to Maddy’s self-image of mystique. She wanted to be a femme fatale, but she feared she was fat and plain; she may have purposely starved herself and smoked endlessly, and fatally, to achieve the waistline of her dreams. Probably in her heart she feared she would never achieve the destiny her lineage portended and so she pretended to be unambitious and unaffected by public acclaim. These were not the ingredients of a happy and long life.

When Madeleine came up to Sydney University she was part of an amazingly brilliant cohort. The young women who were her contemporaries—not just The Octopus, but others whom Helen mentions in her book—were the brightest of the bright and not without ambition. She was at university with people who later established their reputations as writers; I am sure you are familiar with that roll call—Clive James, Bob Hughes, Les Murray, Germaine Greer, Bob Ellis, Mungo MacCallum and so on. There were actors like John Bell and John Gaden; there were people who were later to make their marks as film directors, like Peter Weir and Bruce Beresford, and even composers like Barry Conyngham and Anne Boyd.

I’m not saying Maddy knew all those people, but they were there, floating around in the same primordial soup, as it were. But few of these people attempted to write fiction and none of them—not even Clive, who ultimately wrote four novels—achieved the acclaim of Madeleine St John, famously the first Australian woman to have been shortlisted for the Booker.

It is tempting to believe that Maddy was not born a novelist, but that her prowess developed out of her dismal and tortured life. That if she had lived a happier and more fulfilled life—a more conventional life, with children and a long-term partner—she would never have sharply honed her observational skills and her curiosity about other people’s lives, nor fine-tuned her ever-so-lightly satirical voice on the page.

But here’s the real miracle. As Helen’s book shows time and time again, Maddy could be utterly poisonous in her relations with people. She was harshly critical of others, and rarely restrained. But the narrator in her books, the person who so successfully grabs our attention there, is utterly charming, as Maddy herself could be of course when she tried.

In life she was self-pitying and self-flagellating. She no doubt craved the love of her father and probably loved him in her heart but, as in the psycho-dynamics of sado-masochism, she could only show her love by inflicting pain on him. I’m not excusing Ted when I say this, but he was in fact very much a product of his times. Parenting in the 1940s and 50s, at least in Australia, had not moved much forward from Victorian times.

Maddy was not the only child of that era who suffered physical punishment (yes, even girls were beaten) or who regarded their fathers as cold fish. She was not the only child whose father remarried very soon after their mother died. But for Maddy these events fed into her self-image as an extraordinary person. And in the end she found her destiny and wrote books that fill us with awe.

Helen has written a book that does full justice to Madeleine’s gut-wrenchingly painful zigzag through life. Given that Maddy oversaw the destruction of so many of her private papers—perhaps she feared that they would undermine her mystique—the research Helen had to undertake was heroic. But what we have here—the book we are celebrating this afternoon—is more than simply the result of prodigious research.

Helen has cut a path through some treacherous terrain; she has won her readers over with a combination of her narrative skills and her quiet tact—her ability to be fair to the many warring parties, to the former friends and relatives that lay strewn across the battlefield of Madeleine’s life, like collateral damage to the demons that drove her and made her the accomplished novelist she became.

Helen, your memoir is a triumph and I salute you. As I am sure we all do. Congratulations on a spectacularly compelling book that I hope enjoys the success it so richly deserves.