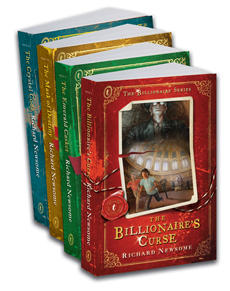 We’re delighted to report that 11-year-old Dhruv Singh from Durack State School in Queensland has won our ‘I Became a Billionaire’ writing competition.

The writing competition, timed to celebrate the release of The Crystal Code, the latest novel in Brisbane author Richard Newsome’s award-winning Billionaire series, attracted hundreds of entries from 9–13 year olds all over Australia and New Zealand. To enter, students had to write a story of up to 500 words about what would happen if they inherited billions of dollars.

The runner-up was Alex McEvoy of Leichhardt Public School in New South Wales for his story ‘The Billionaire’s Test’.

Dhruv and Alex have both won books 1–4 in the Billionaire series. Watch Richard Newsome read ‘The Billionaire’s Test’ and ‘Ghost Zero’ below: