Your basket is empty
Shopping Basket
Review and Check Outright
The Scariest Book of the Year: I’m Thinking of Ending Things by Iain Reid
Posted on 28 June 2016
Tweet thisShare on Facebook

Jake and his girlfriend are driving to visit his parents at their secluded farm. But when Jake leaves the girl stranded at an abandoned high school, what follows is a twisted unravelling of the darkest unease, an exploration of psychological fraility, and an ending as suspenseful as The Usual Suspects and as haunting as Misery.

‘A tight, ferocious little book, with a persistent tenor of suspense that tightens and mounts toward its visionary, harrowing final pages.’ Scott Heim, author of Mysterious Skin and We Disappear

‘Reid’s novel is a road trip to the heart of creepiness.’ Sjón, author of The Blue Fox

‘I’m Thinking of Ending Things, Iain Reid’s hotly anticipated debut novel, is a reminder of how it felt to be scared as a child. It’s a deviously smart, suspenseful, intense, and truly haunting book with a fuse long and masterfully laid.’ LA Review of Books

‘Reid’s tightly crafted tale toys with the nature of identity and comes by its terror honestly, building a wall of intricately layered psychological torment so impenetrable it’s impossible to escape.’ Kirkus (starred review) 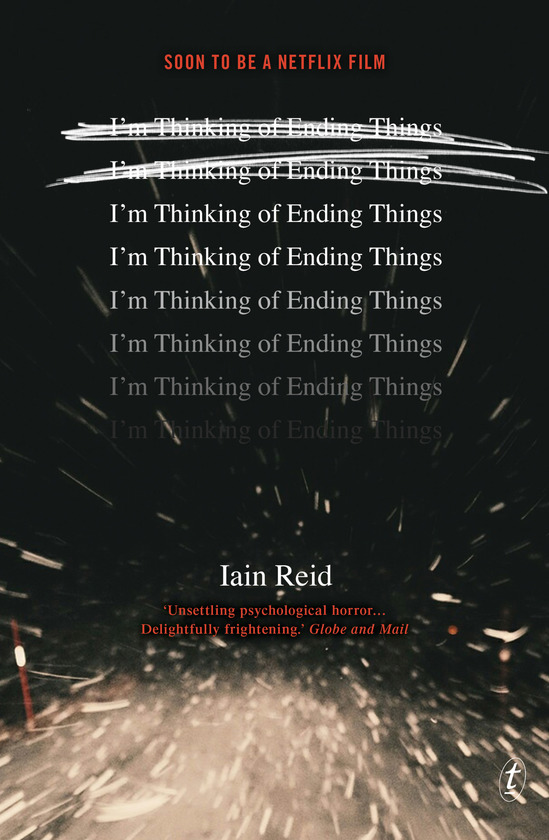 ‘A dark and compelling debut novel, it is a most uncomfortable read but utterly unputdownable.’ Booklist (starred review)

‘Capped with an ending that will shock and chill, this twisty tale invites multiple readings.’ Publishers Weekly (starred review)

‘Every word, every line, feels necessary...With each successive chapter the suspense and psychological buzz gets more intense. It’s like a movie where you almost want to turn away, but of course you can’t.’ Amazon Book Review

‘In addition to Cronenberg, the ghost of Stephen King hovers over these pages...This is the boldest and most original literary thriller to appear in some time.’ Chicago Tribune