Your basket is empty
Shopping Basket
Review and Check Outright
‘Shelter Torn Away’: James Moloney’s introduction to Hills End
Posted on 24 May 2013 under
Tweet thisShare on Facebook 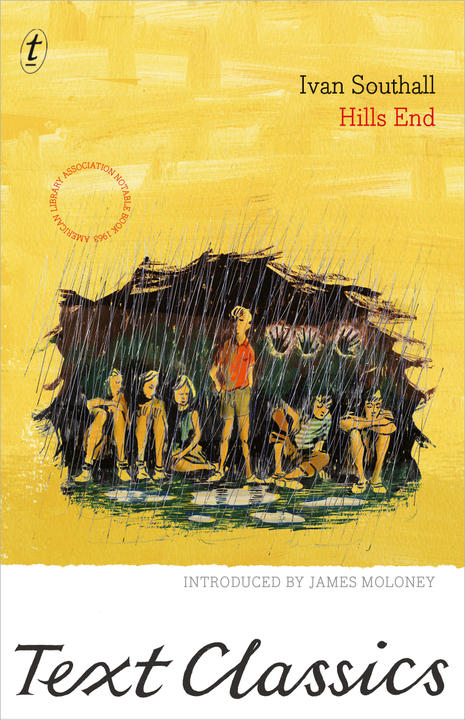 We recently republished Ivan Southall’s Hills End in the Text Classics series. James Moloney’s new introduction to this forgotten gem is reproduced below.

Hills End was first published in 1962 at a time when Australian children’s literature was entering a golden decade during which Ivan Southall’s novels would stand out along with those of Patricia Wrightson, Colin Thiele and a handful of other celebrated names. Our literary culture was ready for something new and so was Ivan after the post-wars years when he had ‘paid his dues’ as a writer in order to establish a career. Hills End marks his transition from fledging writer to assured master eager to challenge his intellect and his ambition with works of greater literary depth. Perhaps Southall sensed this emerging era when he writes, virtually on the first page:

How calm this morning was, and how beautiful. And how strangely moving, because this for Hills End was the most exciting day of the year.

Prophetic words these might be for the nation’s young who would soon have so many fine stories written for them, but they are cruelly ironic for the seven children who remain in the little town on the day of this particular story.

Like many of the writers of this period, Ivan Southall set his most important novels away from Australia’s growing cities, but he wasn’t interested in settler history or character built through stoic hard work and derring-do, not in the way his colleagues viewed them, anyway. He’d found a new landscape to explore—the interior world of his characters—and what makes him stand out is the integrity of the realism he offered the young reader in order to reveal it.

As a children’s author myself, I’ve often grappled with the perennial question—how do I get rid of the parents, so the kids can play the leading roles and make the crucial decisions? In the real world, after all, children are always in the care of some adult or other who bears the responsibility if something goes wrong. In Hills End, Southall deals with this quickly and ruthlessly by sending all but two of the town’s adults to the picnic races, then promptly kills off one of the remaining pair. This was radical in itself, for the character in question could easily have been incapacitated rather than terminated.

Instead the young reader is made to watch the indifferent hand of death enter the storm-damaged town where it remains to stalk the children when their parents cannot return to protect them. The swollen river is described as ‘some evil red monster writhing’ and a further menace roams unpredictably, ready to catch the unwary at any moment. Southall is being explicit, here, in a way that few before him had dared. He’s telling children that the real world is as indifferent as it is violent and what happened to Mr Tobias can happen to any of the children in this story. Further along, I was struck by a telling contrast with Colin Thiele’s treatment of children trapped in a tree by an angry bull. In The Shadow on the Hills, Thiele turned the scenario into one of the funniest in children’s literature while in Hills End, the same predicament generates heart-stopping fear.

In children’s stories to that time, it was deemed acceptable to portray adults as nasty villains to be outwitted and as comic incompetents like Blyton’s Mr Plod. Parents could be misguided in their judgments and unsympathetic teachers were dime-a-dozen, but it seems that children weren’t considered ready for the truly flawed or unreliable guardian. Southall didn’t cross this line with the admirable Miss Godwin, either, but in getting inside her mind he shows her frailties and in particular her vulnerability. What was new here was her self-doubt which contributes to some disastrous actions on her part.

Southall’s ground-breaking theme in this novel is also presented early and in the starkest possible manner: that adults believe children cannot survive on their own, that without the experience, good sense and courage of grown-ups they must inevitably fall into helplessness and chaos. This hard-edged judgment is articulated in the first chapter by Ben Fiddler, the town’s dominant figure, and in doing so, he seems to open a parenthesis which is not closed until he and the other parents return at the story’s end. Everything that occurs between those markers proves the assumption to be utterly wrong. It is one of the novel’s strengths that the tyrannical Fiddler refuses to accept how false his assessment is, despite the evidence before his own eyes. But the children know, especially his son, Adrian, who has undergone a more searching test of character than any of the other children.

The concluding chapter of Hills End is a private nod between the young protagonists and the children who read it. It’s not that Southall is urging children to distrust their adult guardians, but more a recognition of their failings, no matter how much they love those in their charge. Don’t wait for grown-ups to give you credit for your fortitude, he is saying, because ultimately you only have to prove it to yourself to be certain such qualities lie within you. In trusting his readers with such honesty, Southall paved the way for John Marsden’s novels twenty-five years later. Marsden’s Tomorrow, When the War Began series is in many ways a grand expansion of Southall’s scenario in Hills End.

I had not previously read Hills End, even though I am of an age to have read it fresh off the presses as an adolescent. I wasn’t much of a reader in those days. Later, when studying to become a school librarian, I thoroughly enjoyed Let the Balloon Go and the excellent Josh, but I found To the Wild Sky dwelt too much inside the minds of its protagonists for my liking. Reading Hills End now, I greatly admire the delicate balancing act the author pulls off between the physical threats and challenges that drive the narrative and the internalised fears and self-awareness of the children which manage to engage the reader with equal drama and tension. I am in awe of the way Southall switches point of view from character to character with no more than a line break to mark the transition, yet there is no confusion for the reader here as there surely would be in the hands of a less skilful writer. He sketches his seven characters so quickly and so clearly we know them instantly. Just as impressive is the way he uses these switches to tell the full breadth of the story, since his protagonists become separated, face different threats and through those challenges take very personal steps in their development as human beings.

Hills End was read and admired overseas as much as, some would say more than, it was in Australia. Undoubtedly this was due to the universality of its characters, themes and even the setting. Eyebrows might jump at that last suggestion, but there’s nothing particularly Australian about Southall’s hard-scrabble township clinging to forested hills. I’ve driven through similar dots on the map in Britain and the USA. In fact, Hills End seems little different from the Vermont town where Robert Newton Peck set his powerful novel A Day No Pigs Would Die which also features the puritan patriarchy manifest in Hills End.

Children everywhere will recognise themselves in the characters of Adrian and Paul, Frances and Gussie, and even the soft, overweight Christopher who doesn’t quite slough off his buffoonish ineptitude (which would have been a cop-out), yet we understand him and so we like him. Each is drawn with a mixture of humour, tender insight and at the same time an honest assessment of their weaknesses. Frances’ stubborn insistence that taking items from the abandoned store is stealing makes us want to strangle her, for example.

If there is one whom we take to heart more fully, it is Adrian. His lie has led to the children’s predicament. Only slowly do we discover the unforgiving household he has been raised in, which makes his own awareness of his folly unbearable. This is the story of his redemption, not in his father’s eyes, but his own. It is fitting then that the final scenes are viewed from his perspective and we are left with the deep impression that, before our eyes we have witnessed a boy become a man of significant potential.

It has been a pleasure for me, as both a reader and children’s writer, to offer comment on a masterwork like Hills End. I feel sure this new edition will find an appreciative audience among today’s young readers.

Hills End by Ivan Southall is available in bookshops now ($12.95).