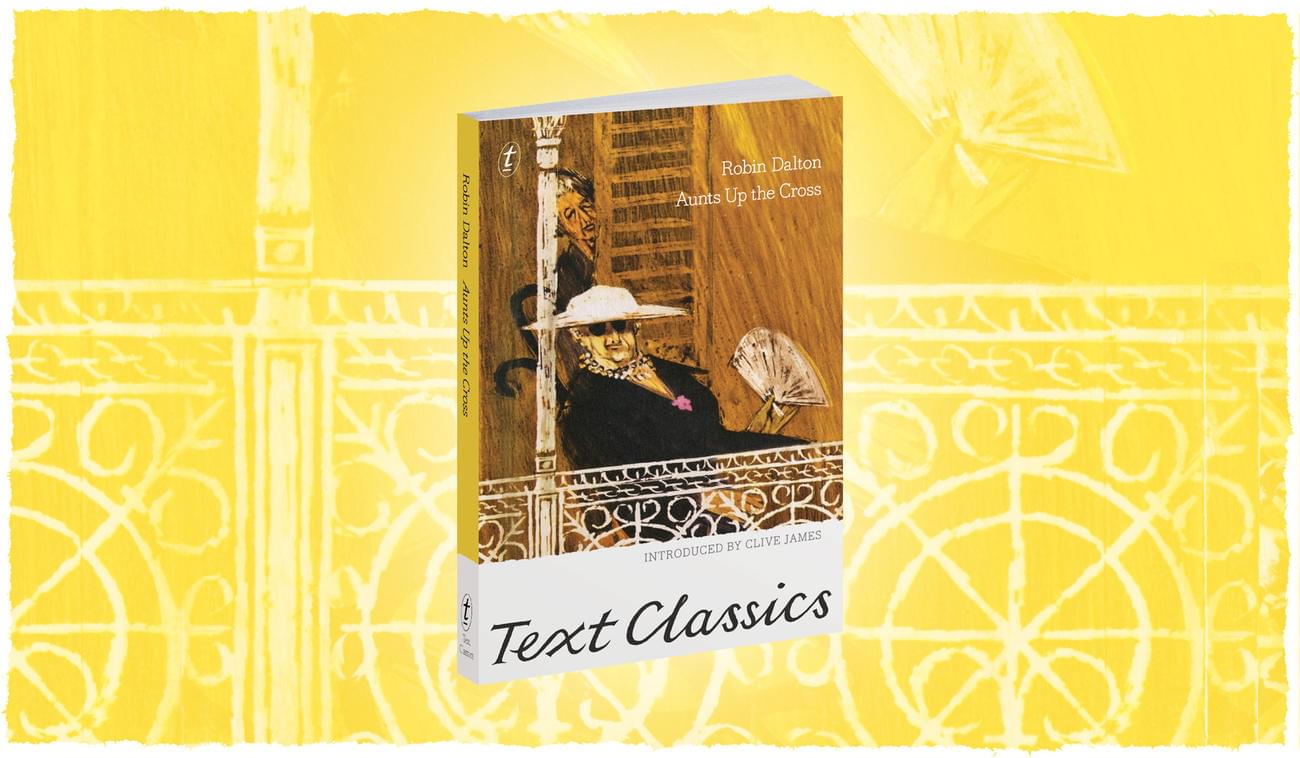 Clive James was one of Australia’s – indeed, the world’s – great memoirists and writers, and he will be sorely missed. We’d like to share his introduction to our Text Classics edition of Robin Dalton’s Aunts Up the Cross. Vale, Clive. 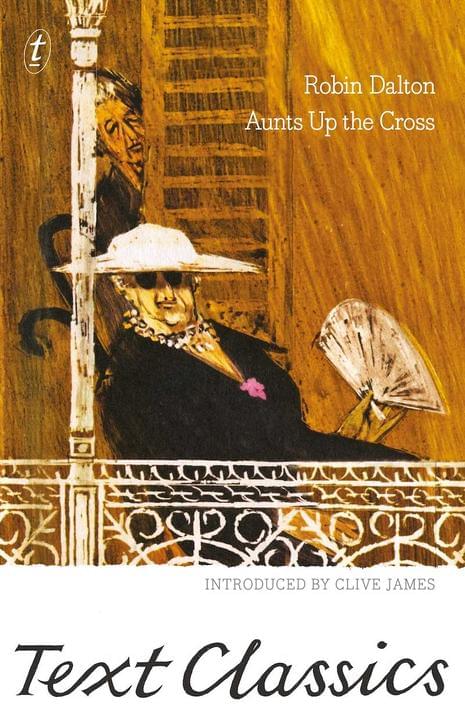 By the time I at last met Robin Eakin personally, on the sable d’or of Biarritz in the early eighties, she was called Robin Dalton and had been one of the most influential literary agents in London for half her career. We were introduced by our mutual friend, Michael Blakemore, whose talents as a director extend to real life: wherever he is, the stage teems with creative people, and in those years, in Biarritz every summer, there was always enough prominent human material spilling out of his house and down to the beach for everyone present to have begun a roman-à-clef except the novelists, who were already writing about what happened the previous summer. John Cleese and Michael Frayn came to the house to work on films and scripts; Tim Piggot-Smith came there to be obscure for a while after starring as Merrick in The Jewel in the Crown; and that trim form under the big straw hat, watching the children play in the shallows of the advancing tide, belonged to the exquisite Nicola Pagett.

But there was never any doubt who was the grande dame of the scene. It was Robin. She had a cut-glass accent that you would have sworn had been first turned and chiselled in the nurseries of Belgravia. I was relishing her company long before I realised that she was Australian, that she was Robin Eakin, and that she had once written a classic book. I had never even heard of Aunts Up the Cross, which sounded to me like a feminist tract about capital punishment in ancient Rome. When I read it, I realised that it was a prize example of a genre I had been looking for: the small Australian book that was better written than the big ones, the actual fragment of echt literature with a small ‘l’ that would make me feel less unpatriotic about all those behemoths of Literature with a capital ‘L’ which had been failing to convince me for so long. My party-piece recitative based on the opening page of The Aunt’s Story had been making me feel guilty for years. (I used to get a big laugh on the one-line paragraph ‘And stood breathing’ but I always felt ashamed: perhaps it only sounded ludicrous.) After I read Aunts Up the Cross the guilt vanished. Here at last was the living proof that a civilised, unpretentious, fully evocative prose style had been available in Australia ever since the young Robin Eakin handed in her first school essay. All we had ever needed to do was look in the wrong place. As so often happens, the true art was filed under entertainment.

To say that Aunts Up the Cross is beautifully written risks making the book sound like a filigree. It is anything but. Social information, moral judgment, comic action and tragic incident are all packed into sentences which have the density of uranium and would also have its weight, if they were not so proportionately constructed that they take off from the page like gliders picked up off a hill by a thermal from its face. Soon you, the lucky first-time reader of this marvellous little creation, will be in the light yet firm grip of its opening paragraph. Before that happens, let us analyse its first two sentences, because there will be no chance to do so once the third sentence reaches back to draw you on. Study this, you upcoming, unreliable memoirists: study this and weep.

My Great-aunt Juliet was knocked over and killed by a bus when she was eighty-five. The bus was travelling very slowly in the right direction and could hardly have been missed by anyone except Aunt Juliet, who must have been travelling fairly fast in the wrong direction.

It’s the gift that money can’t buy and no amount of literary ambition can ever find a substitute for: the prose that sounds as if it is being spoken by the ideal speaker. Yet the spontaneity is all designed: ‘very slowly’ is exactly balanced against ‘fairly fast’, ‘right direction’ against ‘wrong direction’, and the impetus would be ruined if an editor—as almost any magazine editor nowadays would, especially if asked not to—were to insert an otiose comma after ‘right direction’. The whole book is as precisely calculated as that, with the result that calculation scarcely seems to enter into it. When you get to the end, however, you find that Aunt Juliet and the bus make contact again, and you realise that you have been led a dance—a dance in a circle that might have been choreographed by Poussin, if Poussin had ever lived in the Kings Cross area of Sydney.

Robin Eakin did live there, in that unlikely Arcadia. When I was growing up after the war, Kings Cross was featured in the newspapers and magazines—not yet subsumed under the collective name of The Media—as Sydney’s Montmartre, Schwabing, Soho and Greenwich Village, a reputation which seemed mainly to be based on the occasional appearance in the streets of Rosaleen Norton weighed down by mascara, sometimes as late as 11.30 in the evening. When Robin Eakin was growing up there before the war, Kings Cross, for her family at any rate, spelt something more interesting than any Bohemia—gentility in reduced circumstances. She grew up in a house full of life; a house full of lives. In that nest of gentlefolk—Turgenev is one of the many names with whom she can be mentioned in the same breath—there was drama on every floor. The Madwoman of Chaillot was being staged on the mezzanine. Les monstres sacrés inhabited the verandah. No wonder she has spent so much of her time in and around theatres: she was born in one. She revelled in it. For her, Heaven was other people. She shames me in that regard. When I look back at my own book of memoirs, I see that its first critics were right: there is only one character in it, and everyone else is a walk-on. Aunts Up the Cross is just the opposite: its only half-realised character is the author herself.

If the book has a fault, that’s it. When she casually lets slip that she had read all the major novels of Merdith before she was twelve years old, you want to know everything else about her education, and there is nothing like enough about the young love life of a woman so striking in her maturity. Though her evocation of Sydney in the war years ranks with the on-leave passages of T.A.G. Hungerford’s The Ridge and the River, you can’t help feeling that her American service personnel are miraculously well behaved. But the book was written in what was still an age of reticence, and the upside of that is better than the downside: where tact rules, frankness really startles, and no text of such brevity ever had so many flashpoints of shock. Aunt Juliet making contact with the bus is the very least of them. I mention no more because nothing should be allowed to dissipate the economy with which every telling vignette and intermezzo is prepared and resolved. I only say that the moment when the author’s mother causes the death of the plumber is one of the great throwaway paragraphs in modern Australian letters. Read it, and then imagine how Xavier Herbert would have thrown it away. He would have thrown it away like an old refrigerator full of house-bricks: it would have taken him a hundred pages plus.

Aunts Up the Cross is all over in fewer than 150 pages. A fan’s foreword should show the same regard for brevity, so I will back out with one last unreliable memory before her reliable ones begin. I think it was while we were walking along the esplanade of the Côte des Basques (by which I mean we could equally have been in the drawing-room of her holiday-home maisonette, but I would rather you heard waves in the background) that I upbraided her for having written no more than this one perfect book. She fobbed me off with another drink—all right, it was the drawing-room—and politely neglected to state the obvious, which was that she had written something so sensitive to its own past, and so responsive to its own present, that it contained its own future. All the books she might have written later were already in it. What she was too modest even to think was that all the books the rest of us wrote later are in it too.