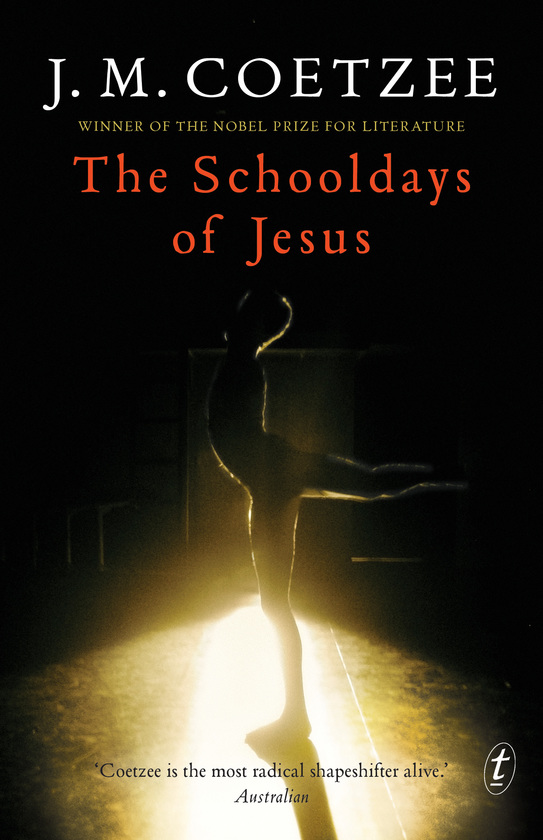 David is the small boy who is always asking questions. Simón and Inés take care of him in their new country. He is learning the language; he has begun to make friends. He has the big dog Bolívar to watch over him. But he’ll be seven soon. He should be at school. And so David is enrolled in the Academy of Dance in Estrella. It’s here, in his new golden dancing slippers, that he learns how to call down the numbers from the sky. But it’s here too that he will make troubling discoveries about what grown-ups are capable of.

The Schooldays of Jesus, the startling sequel to J. M. Coetzee’s widely praised The Childhood of Jesus, will beguile its readers. With the mysterious simplicity of a fable, it tells a story that raises the most direct questions about life itself.

J. M. Coetzee was the first author to win the Booker Prize twice and was awarded the NobelPrize for Literature in 2003. His work includes Waiting for the Barbarians, Life & Times ofMichael K, The Master of Petersburg, Disgrace and Diary of a Bad Year. His most recent writingis a trilogy of novels: The Childhood of Jesus, The Schooldays of...

‘The Schooldays of Jesus by JM Coetzee is maddening, obscure — and brilliant.’

‘Obscurely compelling, often very funny, full of sudden depths…The Schooldays of Jesus is a work of many small but significant truths, rather than one central message; a novel stubbornly committed to its own way of doing things.‘

‘Beautiful but enigmatic fable, written in clean, fierce, present tense prose, seems set in some sort of afterlife…insistently memorable in its spare evocations, it leaves the reader charmed, intrigued, impressed and curious, with much compulsively to ponder.’

Adelaide Advertiser on The Childhood of Jesus

‘Yet although it is written with the coolness and limpidity that make Coetzee such a master, the story remains almost uninterpretable, certainly no simple allegory, quite an achievement in itself. Frustrating, yes, but not just that. There were moments when I found it almost too affecting to read without pausing to recover myself.’

‘At sentence level, he [Coetzee] is, of course, a model of clarity – think of the dry and unornamented perspicuity Coetzee brings to bear in his fiction, the fastidiousness of thought that emits from his creations the way a dot matrix printer unspools. Yet the cumulative effect of this approach is not arid intellection but organic feeling: full-fleshed, mysterious and often extreme.’

‘A theological and philosophical fable of considerable brilliance, power and wit. Coetzee hasn’t done anything as fine and beautifully executed as this since Disgrace.’

Canberra Times on The Childhood of Jesus

‘Double Booker Prize-winner Coetzee’s fable has a dream-like, Kafkaesque quality. Are we in some kind of heaven, purgatory or simply another staging post of existence? Clear answers are elusive, but this is a riveting, thought-provoking read and surely Coetzee’s best novel since Disgrace more than a decade ago.’

Daily Mail on The Childhood of Jesus

‘[A] quiet, haunting novel…Coetzee’s calm, emblematic prose lifts the plot into something redolent with metaphor and mystery…Any statement can become a symbol; every event is suffused with potential revelation; something magical is always present and just out of reach…It’s a memorable accomplishment, turning the everyday into the almost everlasting.’

Weekend Herald (NZ) on The Childhood of Jesus

‘The way [Coetzee] mixes the enigmatic and almost otherworldly elements of this child with his youthful and innocent questions makes David the perfect mix of endearing, enraging, and enlightening. He’s as believable as characters come.’

‘Coetzee’s depiction is unlike any other you’ve read. Rather, it’s decidedly ‘Coetzeean’…Eloquent and provocative.’

‘The indeterminacy…gives the two Jesus novels their air of unreality and their vaguely allegorical sheen, but it also provides a conveniently stripped-back setting in which to stage philosophical arguments.’

‘These are novels for our time…They will puzzle you and frustrate you but at the end of Schooldays you will catch a glimpse of the things unseen.’

‘What the reader will remember will be the pleasures available to anyone: the deadpan humor, the swoons of their melodramatic thriller plots, and the beguiling weirdness of the world Coetzee has constructed.’

‘Whenever I want to destroy the world in my head in order to discover an invisible truth, I am sure I will pick up this book again.’

‘A phenomenal achievement in fiction…The narrative is consistently moving and profound, and incredibly self-sufficient. It creates its own rules and contains everything it needs. To me the journey of the boy David and those around him came across as a fable about our inspiring but ultimately doomed search for meaning. It states the importance of caring for each other, of committing to care, even when social struggle and the worst tendencies of the human spirit get in the way. And in the end literature itself proves to be the strongest tool for meaning and maybe transcendence. I’m eager to read the whole thing again.’