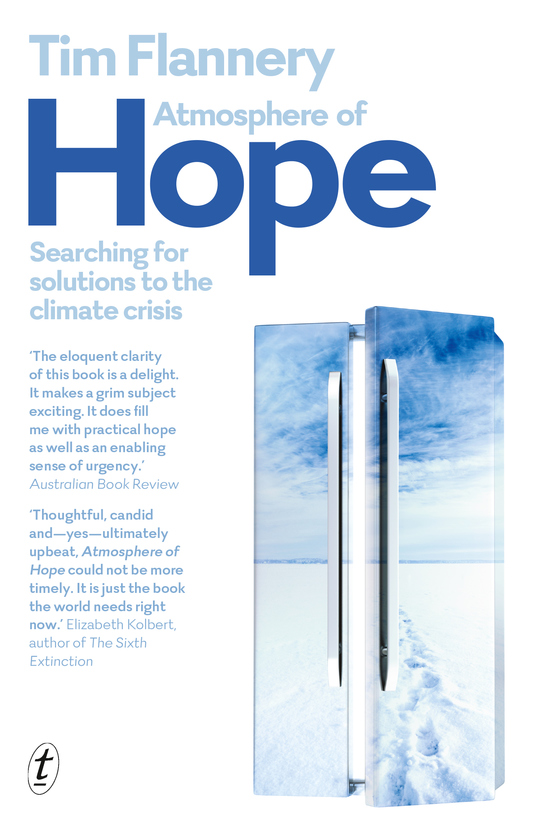 Atmosphere of Hope: Searching for Solutions to the Climate Crisis

A decade after his internationally bestselling The Weather Makers, acclaimed scientist and author Tim Flannery argues that Earth’s climate system is approaching a crisis. Catastrophe is not inevitable, but time is fast running out. Atmosphere of Hopeprovides both a snapshot of the trouble we are in and an up-to-the-minute analysis of some of the new possibilities for mitigating climate change that are emerging now.

‘Paris climate change summit our last chance to save the planet.’ Tim Flannery in New Daily

‘I can’t imagine 2050...But what I do know is the biggest problem people will be facing: the build-up of CO2 that’s already in the atmosphere and is not going to disappear by itself.’ Tim Flannery in the Australian

‘This man is a national treasure, and we should heed his every word.’

‘Thoughtful, candid and—yes—ultimately upbeat, Atmosphere of Hope could not be more timely. It is just the book the world needs right now.’

‘An important and timely book…The eloquent clarity of this book is a delight. It makes a grim subject exciting. It does fill me with practical hope as well as an enabling sense of urgency. I am also moved by what can be achieved.’

‘A significant statement from a great Australian.’

‘Flannery cleverly offers practical solutions rather than another jeremiad about climate change.’

Australian Financial Review, Best Books of 2015
Other editions ofAtmosphere of Hope
Other Titles byTim Flannery
You might also like

<i>The ‘third way’, as I’ve come to think of it, is a very new concept encompassing proposals and experiments that shed light on how Earth’s system might be used to draw </i><i>CO<sub>2</sub> out of the air and sea at a faster rate than occurs presently, and to store it safely. The third way is about creating our future out of thin air.</i>