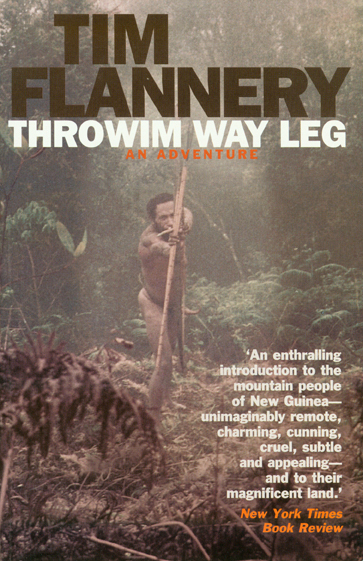 Throwim Way Leg is unputdownable, a book of wonder and excitement, of struggle and sadness, a love letter to Papua New Guinea and Irian Jaya.

This book brims with marvellous stories. Tim Flannery meets skilled hunters and befriends a shaman. He climbs mountains never before scaled by Europeans, discovers new species and stumbles across the giant bones of extinct marsupials.

And he writes movingly about the fate of indigenous people when their intricate cultures collide with mining companies and the high-tech world of the late twentieth century.

‘In New Guinea Pidgin,’ Tim Flannery explains, ‘throwim way leg means to go on a journey. It describes the action of thrusting out your leg to take the first step of what can be a long march…’

With these words he invites us to share in his breathtaking adventures in the jungles of Papua New Guinea and Irian Jaya. You will never think about the bird-shaped island to our north in the same way again.

‘An enthralling introduction to the mountain people of New Guinea - unimaginably remote, charming, cunning, cruel, subtle and appealing - and to their magnificent land.’

‘Tim Flannery is in the league of the all-time great explorers like Dr David Livingstone.’

‘Australia has found its own Stephen Jay Gould.’