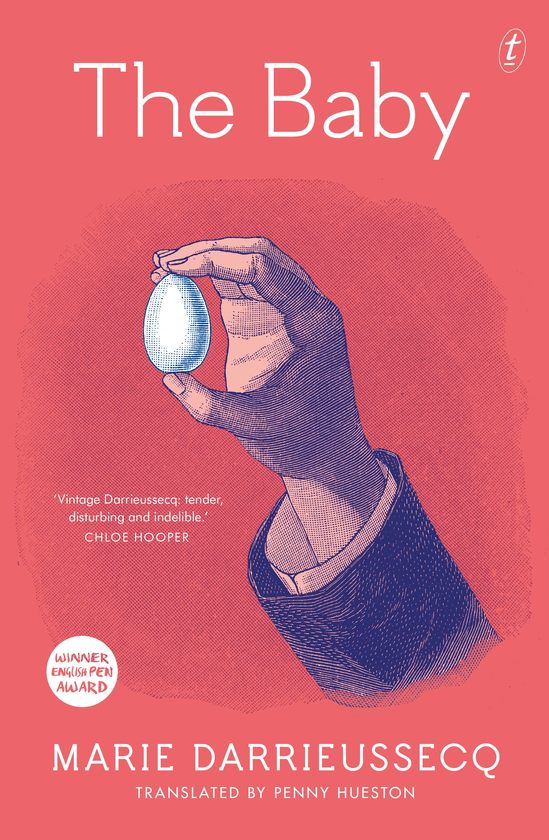 The Baby is a mother’s project and a writer’s project—how to reconcile these two demanding roles? What is a baby? And why are there so few of them in literature? Through notes taken in the months after her first child was born, Darrieussecq, in her characteristically ingenious style, makes observations that will bring smiles and grimaces of recognition, and raise important questions.

Along with the banal drudgery of childcare, there is the euphoria, the obsession, the terror and the visceral focus on the body. Arguing with ‘Saint de Beauvoir’, Darrieussecq examines how women as mothers are targeted from all angles. How, she asks, can a woman be more and other than a mother?

‘Without seeming to, Marie Darrieussecq gives us an example of what literature can achieve. It is a rare thing.’

‘The reader will be captivated by Darrieussecq’s hypnotic style.’

Le Monde on Our Life in the Forest

‘There are few writers who may have changed my perception of the world, but Darrieussecq is one of them.’

The Times on Men

‘Darrieussecq evokes the awe, fear and weirdness of motherhood, the demolition of certainty, an instinct for rapture. She puts her hand in the great dark lake of maternal experience and scoops up filigrees of the phosphorescent memory all mothersshare, turns them gleaming in the light of her words, one after another. I was disturbed, envious, enthralled.’

Kate Holden, author of In My Skin and The Romantic

‘Darrieussecq ruminates on both the magical and trivial ins-and-outs of motherhood and contemplates topical questions around how we define mothers. The book is as much of a must-read for those with children, as it is for those considering whether (or not) to have them.’

‘Darrieussecq has a force of clarity, an ability to take herself seriously without the need for self-deprecation. She is always original, always thrilling.’

‘[Penny] Hueston has obviously captured the original pulse of the language, not an easy task.’

‘Darrieussecq captures the fleeting, endless drift of life with a small child…feelings that Darrieussecq understands only too well and about which she is unflinchingly honest.’

‘[Darrieussecq’s] account is visceral yet detached, bodily yet scientific. Reading her text, I’m reminded of Maggie Nelson’s breathtaking The Argonauts – both clash the physical and taboo with the philosophical and the literary. But what is so crucial to Nelson’s and Darrieussecq’s work is that, somehow, there is no clash. The worlds meld seamlessly together, as though they should have always been that way.’

‘What a strangely hypnotic book The Baby is…The writing is beautiful, as clear as a glass of water.’