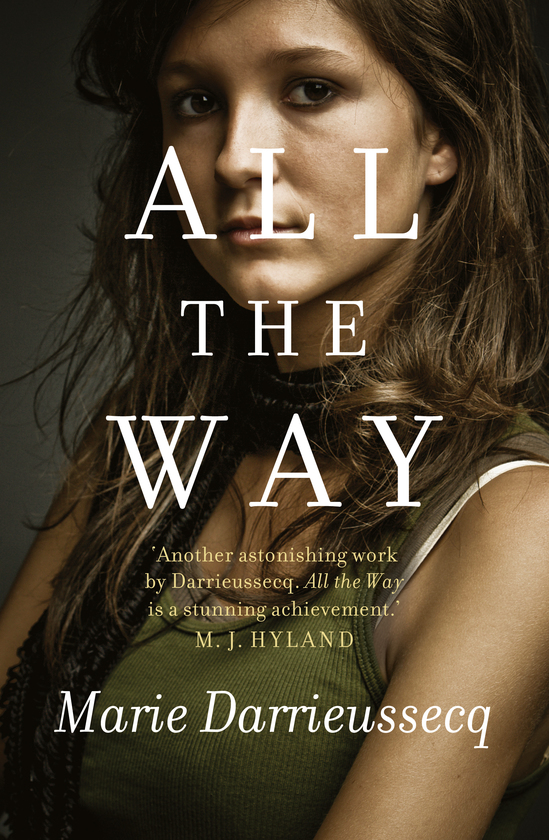 A powerful, hilarious and achingly honest story about a young French girl discovering her sexuality.

Solange wants to have sex. Will it be with one of the boys at school? The exchange student? The fireman she meets at the disco when she sneaks out one night? Or with Arnaud, the coolest boy she knows?

She’d like to see more of her father, even though he’s so embarrassing. As for her mother, she’s too depressed. Something to do with the photo of the dead boy on the mantelpiece.

Monsieur Bihotz, her neighbour who lives alone now his mother has died, is supposed to be her babysitter but Solange has other ideas. There’s really not much scope in her boring village, Clèves.

But who cares, Solange will get to do it, go all the way, whatever it takes.

Marie Darrieussecq’s All the Way is a brilliant and hilarious picture of an adolescent girl.

‘Another astonishing work by Darrieussecq. All the Way is a stunning achievement.’

‘A dreamy and daring narrative.’

‘Explicit, funny and unsentimental, All the Way captures what it’s like to be under-age and out of your mind with desire. Darrieussecq is a sublime writer with real insight.’

‘Darrieussecq is excellent at evoking the ever-shiftin boundaries of the adolescent world. She also poignantly depicts the complexities of parent-child relationships and their often turbulent period during adolescence.’

‘[A] sharp, funny and honest description of a girl coming to grips with her blooming sexuality.’

‘All the Way offers insight into the confusing world of adolescence and sexual awakening and is unsettling in its honesty.’

‘Darrieussecq is not afraid to break social taboos, nor does she flinch from the utter selfishness that accompanies adolescence…sad, funny and challenging.’

‘There are few writers who may have changed my perception of the world, but Darrieussecq is one of them.’

‘The internationally celebrated author who illuminates those parts of life other writers cannot or do not want to reach.’

‘Darrieussecq dissects with anatomical precision the climate of small-town France in the 1980s, with its strange mix of sexual openness and the continued prevalence of a particularly French brand of chauvinism and racism, all coloured by the disappointment of a generation that came of age in 1968, the promised revolution having faded almost completely, leaving nothing more noble than a petit bourgeois sensibility.’

<i>The stupidity of this life, that she even needs this stupid body, the bother of it all. She dips her face in her cupped hands, it smells like cold rock and iron, the water runs between her breasts, their ridiculous shape. Her skirt drags and sticks to her thighs, and her pubis is outlined in an upside-down Y—this insistent presence, both empty and full, hungry and glutted—is she the only one to be so overwhelmed by it?</i>