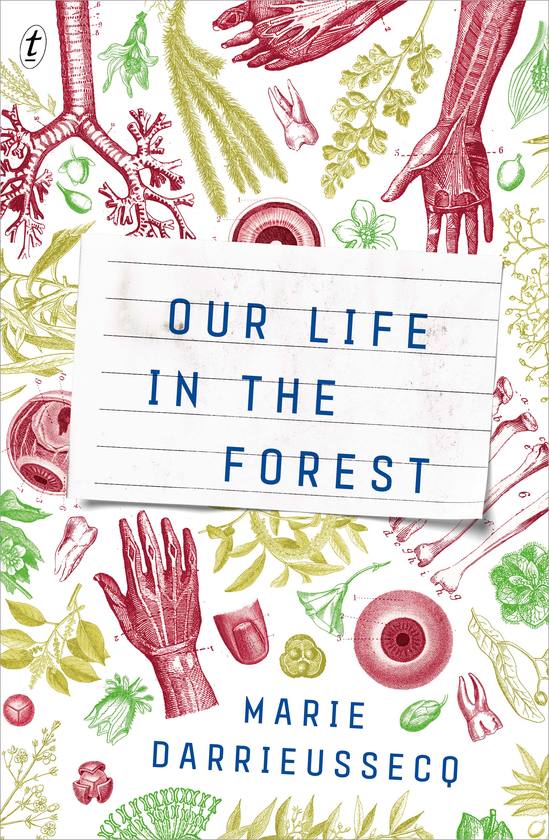 Our Life in the Forest

In the near future, a woman is writing in the depths of a forest. She’s cold. Her body is falling apart, as is the world around her. She’s lost the use of one eye; she’s down to one kidney, one lung. Before, in the city, she was a psychotherapist, treating patients who had suffered trauma, in particular a man, “the clicker”. Every two weeks, she travelled out to the Rest Centre, to visit her “half”, Marie, her spitting image, who lay in an induced coma, her body parts available whenever the woman needed them.

As a form of resistance against the terror in the city, the woman flees, along with other fugitives and their halves. But life in the forest is disturbing too—the reanimated halves are behaving like uninhibited adolescents. And when she sees a shocking image of herself on video, are her worst fears confirmed?

Our Life in the Forest, written in her inimitable concise, vivid prose recalls Darrieusecq’s brilliant debut, Pig Tales. A dystopian tale in the vein of Never Let Me Go, this is a clever novel of chilling suspense that challenges our ideas about the future, about organ-trafficking, about identity, clones, and the place of the individual in a surveillance state.

Artshub: ‘Darrieussecq’s prose style is succinct and muscular, characterised by short sentences and a strong sense of the narrator’s bleakly comic take on life.’
The Misadventures of a Reader
Overland  (October in Fiction)
Saturday Paper (Aug 18)

Praise for Marie Darrieussecq
andOur Life in the Forest

‘The reader will be captivated by Darrieussecq’s hypnotic style.’

‘The title could be “Our Life in the Future”, but reducing this book to a dystopian tale is doing it a disservice…A journal from beyond the grave, as time runs out…And a profound novel about loneliness.’

‘In this exceptional novel, the author of Pig Tales describes a world in the future where surveillance is omnipresent and clones rule…An unusual, strange book.’

‘A disturbing dystopian tale in which tragedy and irony work together…Ingeniously and brilliantly, Marie Darrieussecq’s sparkling tale adds to the classics of futuristic fiction. Even more profound than the social and political resonance of this novel is the theme of loneliness.’

‘In this brilliantly executed dystopia, Marie Darrieussecq writes with rare skill about the concerns of our time—the senseless destruction of the planet and transhumanist madness. Outstanding.’

‘Who would have thought Marie Darrieussecq would write a thriller? This brief, feminist and political novel is perhaps her most inventive…With wit and elegance, the author takes us into a narrative full of tension, and with the same humour as in Pig Tales. Once again, she creates an absurd world, and denounces the failings of our society.’

‘Once again, Darrieusecq gives us a passionate investigation into the deficiencies, transformations and lapses in our humanity…A little like Ray Bradbury in Fahrenheit 451, she shows how literature is our best means to disrupt functionality.

‘Darrieussecq’s writing brings the story to life vividly in your mind.’

‘Our Life in the Forest is a psychologically astute novel, with a few well-executed twists that will no doubt please fans of the genre.’

‘Darrieussecq writes with a kind of truncated brevity that is stark, muscular and direct. The effect is immediately arresting…[Our Life in the Forest] is Atwoodesque, melding some of the brutal and unpleasant aspects of our current moment into a plausible but avoidable future.’

‘Speaks to the heart of what it is to be human.’

‘Darrieussecq’s prose style is succinct and muscular, characterised by short sentences and a strong sense of the narrator’s bleakly comic take on life.’

Extract fromOur Life in the Forest

Rights forOur Life in the Forest