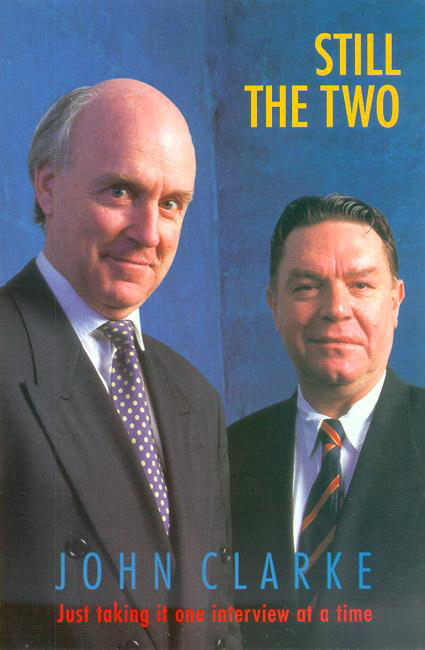 Still the Two is an hilarious selection of interviews with the nation’s leaders and prominent citizens. Based on John Clarke and Bryan Dawe’s appearances on ‘A Current Affair’ and 3AW, the book features guest appearances by everyone from John Howard to Alan Bond, from Jeff Kennett to Paul Keating.

Still the Two is astute, hilarious and brilliantly written.

‘Laugh till you drop.’

‘The pieces capture the flavour of Australian politics as much as they do the characters who play them.’

Mr Howard thanks for joining us.It's a pleasure.Have you calmed down yetI'm getting used to it a bit now, yes.It must just have been the biggest buzz. Did you ever think you'd win an Oscar?No I didn't, although it was a dream role.Why was it such a perfect role for you?Well I think it was the magic of the guy; little guy; typical for his time, confused, slightly peculiar.How is he confused?He's supposed to be a leader and he doesn't do any leading. He has a kind of psychological crisis. He can't decide what to do.Who is he supposed to leading?Well at one stage he's got himself into the position where he's running an entire country.Oh dear. And he doesn't know what he's doing?No idea.So what does he do?Well you'll have to see the film.