Compulsively readable, Beauty Is a Wound combines history, satire, family tragedy, legend, humour, and romance in an astonishing epic novel, in which the beautiful Indo prostitute Dewi Ayu and her four daughters are beset by every monstrosity.

Kurniawan’s gleefully grotesque hyperbole is a scathing critique of his young nation’s troubled past: the rapacious offhand greed of colonialism; the chaotic struggle for independence; the 1965 mass murders, followed by three decades of Suharto’s despotic rule. Drawing on local sources—folk tales and the all-night shadow puppet plays, with their bawdy wit—and inspired by Melville and Gogol, Beauty Is a Wound is passionate and ironic, exuberant and confronting. Hailed as ‘the next Pramoedya’, Eka Kurniawan is an exciting new voice in contemporary literature.

Read a feature on Eka in the Sydney Morning Herald. 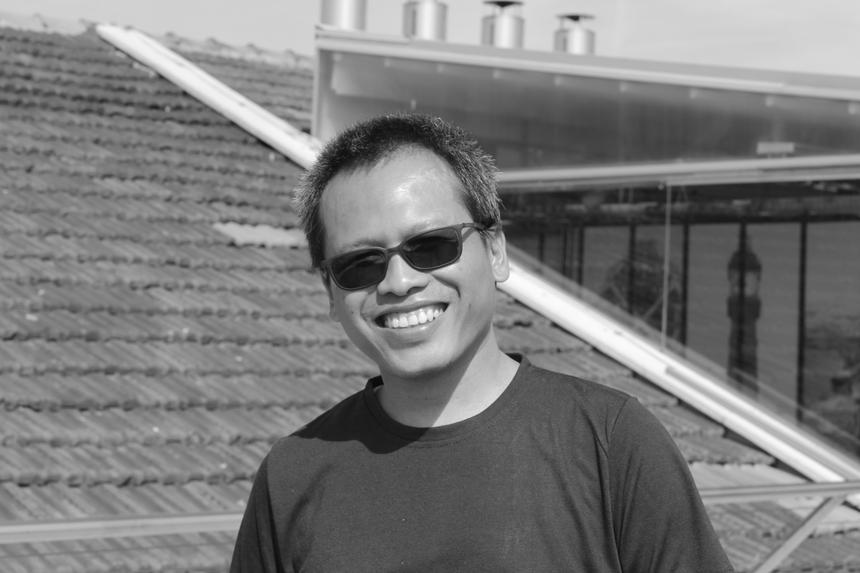 Eka Kurniawan was born in 1975 and is the author of novels, short stories, essays, movie scripts, and graphic novels. He has been described by the Jakarta Post as ‘one of the few influential writers in Indonesia.’

Praise for Eka Kurniawan
andBeauty Is a Wound

‘Without a doubt the most original, imaginatively profound, and elegant writer of fiction in Indonesia today: its brightest and most unexpected meteorite.’

‘A vivacious translation of a comic but emotionally powerful Indonesian novel.’

‘So sorrowful, so savage, so freaking weird…Densely textured, complex in time scheme and epic in scope…The author’s intelligence breathes through the lines of the page, and he is equally capable of delicacy as decadence.’

‘Beauty Is a Wound, is an astonishing work of fiction, a crazy, dream-like tale of one woman who goes to remarkable lengths in order to survive.’

‘The first sentence of nearly every chapter in the episodic Beauty grabs the reader and yanks him into the action…whatever he chooses to write will be well worth reading.’

‘An unforgettable, all-encompassing epic. Upon finishing the book, the reader will have the sense of encountering not just the history of Indonesia but its soul and spirit. This is an astounding, momentous book.’

‘Kurniawan’s story of an undead woman had morphed into the story of modern Indonesia, an epic novel critics are more wont to compare to One Hundred Years of Solitude and The Canterbury Tales.’

‘As translated by Annie Tucker, Kurniawan’s prose is lucid and occasionally lyrical but never showy.’

‘Beauty Is a Wound draws on history, myth and Kurniawan’s considerable skill as a story teller to deliver an unforgettable tale…A compelling read.’

‘An original and thought-provoking read.’

‘Romps along with wilful disregard for the niceties of taste and decorum. Perhaps that’s only as it should be, as one comes to grips with aspects of Indonesian history that most often lie buried beneath a veneer of restraint and good manners.’

‘Vast and ambitious…[An] impressive work which paints an evocative and ghostly portrayal of mythical and historical times past.’

‘An epic fable, full of dark magic, hyperbole and gratuitous violence…Kurniawan’s blend of the horrible and the absurd is like nothing I’ve read before, and thrusts Indonesian literature into the spotlight in a powerful way.’

‘[A] huge book full of ghosts and violence and fun…It’s quite unlike anything I’ve ever read.’

‘A ghost-filled, vastly populated, and rollicking contemporary mythic tale, in the spirit of Márquez’s One Hundred Years of Solitude, but funnier.’

‘Beauty is a Wound is an epic of a kind that could only come from the pen of an Indonesian…Kurniawan’s creative ambition and scope are traditional in some senses, but his deeply strange work is profoundly original.’

‘Magical realism to rival that of Gabriel García Márquez or Salman Rushdie.’

‘This big, baggy novel has everything, from ghosts and reincarnations to vengeful spirits, but it also features a very strong woman utterly different to the stereotypical demure women so often portrayed as representatives of Indonesia’

‘Sometimes maddening in its scope and innumerable characters, it’s an exhilarating novel, and one of the best in translation published this decade.’

Extract fromBeauty Is a Wound

<i>One afternoon on a weekend in March, Dewi Ayu rose from her grave after being dead for twenty-one years. A shepherd boy, awakened from his nap under a frangipani tree, peed in his shorts and screamed, and his four sheep ran off haphazardly in between stones and wooden grave markers as if a tiger had been thrown into their midst.</i>

Rights forBeauty Is a Wound