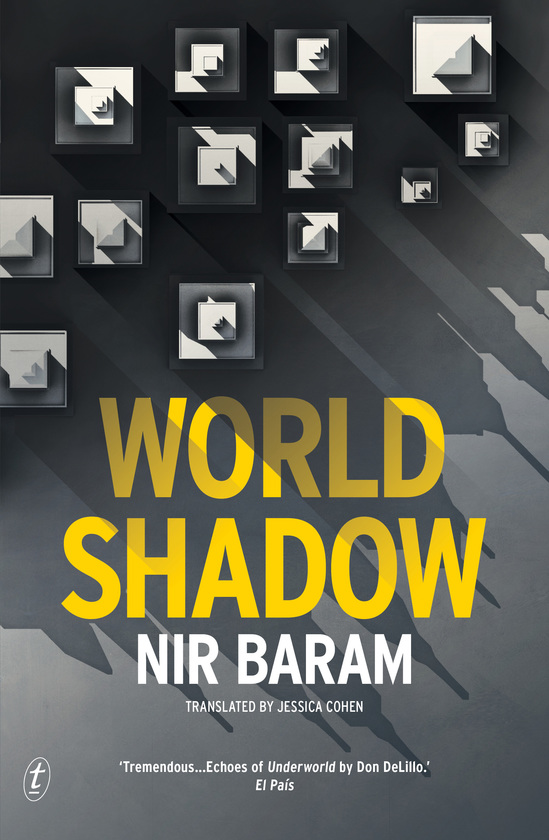 A fast-paced novel about politics, money, power and corruption that holds a mirror up to the present day.

It’s the mid-1990s. Gavriel Mansour wants to take advantage of the business opportunities opening up in Israel. Moving in political and financial circles, he finds his way into the upper reaches of power—but the higher he goes, the less he understands the intrigues in which he is involved.

Cut to the present. A group of young Londoners—homeless, unemployed and disaffected—is organising a worldwide strike to protest globalisation and inequality. Sick of being screwed over, they conspire to overturn the prevailing order.

Meanwhile, an eerily familiar American political consulting firm, with interests everywhere from Bolivia to the Congo, ostensibly exists to further liberal and progressive causes—until the veil is drawn back on the true nature of its activities.

With its masterly interwoven narrative strands and its global perspective, World Shadow confirms Nir Baram as a major contemporary writer on the world stage.

Nir Baram was born into a political family in Jerusalem in 1976. His grandfather and father were both ministers in Israeli Labor Party governments. He has worked as a journalist and an editor, and as an advocate for equal rights for Palestinians. Baram began publishing fiction when he was twenty-two, and is the author of five novels. His books...

Jessica Cohen is a British-Israeli-American translator. She shared the 2017 Man Booker International Prize for translating David Grossman’s 2014 novel, A Horse Walks into a Bar, and is a 2021 Guggenheim Fellow.

‘The best novel Baram has written so far, a brilliant literary achievement. World Shadow is asking the most important questions of our time.’

‘A real literary achievement. Surely one of the most impressive novels written in Hebrew in the past years. It is a mind-blowing epos that raises big questions about the human spirit, democracy, morals and violence.’

‘The most intelligent, insightful and thought-provoking documentation written to date of the economic, social, moral and cultural processes that are sending seismic waves throughout our world.’

‘A tremendous description of the evils, passions and hopes that shape the world today. One of the most ambitious novels I have ever read…You can hear in World Shadow echoes of Underworld by Don DeLillo. Echoes of rebellion…of great literature.’

‘Some readers will feel this great novel predicted many aspects of Trump’s rise, and they would not be mistaken.’

‘May be the most impressive novel that has been written about this era of discontent.’

‘The reader is captivated until the crushing end, thanks to Nir Baram’s great art…A masterpiece.’

‘A boundlessly ambitious novel. This is the Hamlet of the twenty-first century.’

’For this novel, Baram deserves a place at the front line of modern literature.’

‘Baram is one of the best writers I have read in recent years.’

‘Nir Baram is the great revelation of the Hebrew language…One of the most important novels of our time. You read it and think of Balzac.’