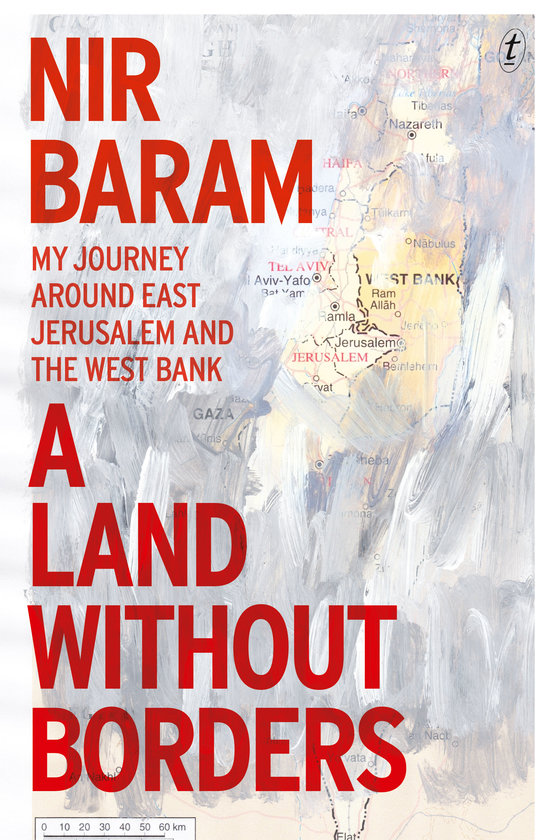 A Land Without Borders: My Journey Around East Jerusalem and the West Bank

Award-winning journalist and author Nir Baram spent a year and a half travelling around the West Bank and East Jerusalem. In this fascinating recount of that journey, Baram navigates the conflict-ridden regions and hostile terrain to speak with a wide range of people, among them Palestinian–Israeli citizens trapped behind the separation wall in Jerusalem and Jewish settlers determined to forge new lives on the West Bank.

Baram also talks to children on Kibbutz Nirim who lived through the war in Gaza, and ex-prisoners from Fatah who, after spending years detained in Israeli jails, are now promoting a peace initiative. And he returns again and again to Jerusalem, city of his birth, where a hushed civil war is in full swing.

A Land Without Borders is a clear-eyed, compassionate and essential guide to understanding a complex reality; a perceptive and sensitive exploration of a labyrinthine conflict and the experiences of the people ensnared in it, by one of the most distinctive writers working in Israel today.

Nir Baram was born in Jerusalem in 1976. He is the author of five novels, including Good People, which was translated into English in 2016. His novels have been translated into more than ten languages and received critical acclaim around the world.

‘Written with great talent, momentum and ingenuity…it expands the borders of literature to reveal new landscapes.’

‘A book that is a fascinating and charged document about the meaning of home, security and freedom, on both sides of the divide.’

‘Quite possibly, Dostoyevsky would write like this if he lived in Israel today.’

‘Good People rewards the reader’s patience while mining a tragic sense of irony that extends all the way to its title.’

‘Baram uses intense geographical plotting and is chillingly eloquent…[Good People] is tremendous. I read it in two sittings and I learned a lot. How does a man in his early 30s know how to write like this?’

‘Good People is a richly textured panorama of German and Russian life…This ample novel lives most memorably through Baram’s vignettes of people, dwellings, cities, landscapes and the like that seem to lie, at times, at the periphery of its central concerns.’

‘Precise and evocative, Good People is a riveting glimpse into a different place and a different time.’

‘An honest and troubling snapshot of Israel…From horror to fatigue to indifference, an important look forward and back that provides a grass-roots sense that one state needs to satisfy sovereignty for all.’

‘An engaging, fast-paced odyssey that conveys an intimate understanding of why peace remains so elusive…Nir Baram does what more people in the region should undertake: a grand listening tour that encompasses all sides of the conflict. The author is a good listener, too, albeit one who isn’t afraid to ask hard questions.’

‘Baram brings an open heart and mind to exploring the difficulties of coexistence where physical and emotional walls do harm on both sides, reaching beyond headline to explore the lives of Palestinians and Jews of different generations.’

‘For all outside of the land who bandy Israel/Palestine talking points about—indeed, for those in it who rarely interact with those on the other side—these raw perspectives are a necessary introduction to the incredibly complex nature of the current divide.’

‘Nir Baram is an Israeli novelist, a highly respected journalist and an accomplished editor. So it is hardly surprising that his description of his journey around East Jerusalem and the West Bank is eminently readable, although much of what he recounts is worrying enough to give the reader many sleepless nights despite the shafts of optimism that occasionally shine through the text.’

‘An essential guide to the human elements of Israel’s current crisis of identity…Baram’s work is compassionate, considered and sensitive. For the non-specialist, it is both fascinating and vital for understanding this labyrinthine conflict…This is a brave and balanced report. It is quintessential reading.’

‘This book is not just insightful background. It is an essential guide to the human elements of Israel’s current crisis of identity…Baram’s work is compassionate, considered and sensitive. For the non-specialist, it is both fascinating and vital for understanding this labyrinthine conflict…This is a brave and balanced report. It is quintessential reading.’

‘This is essential reading for those who wish to understand the Israeli-Palestinian conflict—and for those who already think they do.’

‘To hear it from the people who currently live in the occupied territories—650,000 Jewish settlers and 27 million Palestinians—it is now as much a zero-sum game as ever. Their voices come through in A Land Without Borders: My Journey Around East Jerusalem and the West Bank, a wide-ranging travelogue…The great virtue of his book is that Baram lets his interlocutors speak for themselves. Long stretches are verbatim dialogues. And what he hears is total and irreconcilable difference.’

‘[Baram’s] writing has a “you are there” quality; people come alive in his vivid, emotional prose…The people’s lives are described in rich imagery: the beauty of the landscape and the humanity of the villagers, settlers and townspeople come through in descriptions of their diverse cultures.’

‘Baram’s sensitive and compassionate account is a clear-eyed, essential guide to a complex reality.’

<i>I gradually came to understand that the Israel I know is separated from the West Bank not only by checkpoints like Kalandia, but also—and more significantly—by a cognitive barrier, which is growing higher all the time.</i>