The Book of Dirt

They chose not to speak and now they are gone…What’s left to fill the silence is no longer theirs. This is my story, woven from the threads of rumour and legend.

Jakub Rand flees his village for Prague, only to find himself trapped by the Nazi occupation. Deported to the Theresienstadt concentration camp, he is forced to sort through Jewish books for a so-called Museum of the Extinct Race. Hidden among the rare texts is a tattered prayer book, hollow inside, containing a small pile of dirt.

Back in the city, Františka Roubíčková picks over the embers of her failed marriage, despairing of her conversion to Judaism. When the Nazis summon her two eldest daughters for transport, she must sacrifice everything to save the girls from certain death.

Decades later, Bram Presser embarks on a quest to find the truth behind the stories his family built around these remarkable survivors.

The Book of Dirt is a completely original novel about love, family secrets, and Jewish myths. And it is a heart-warming story about a grandson’s devotion to the power of storytelling and his family’s legacy. 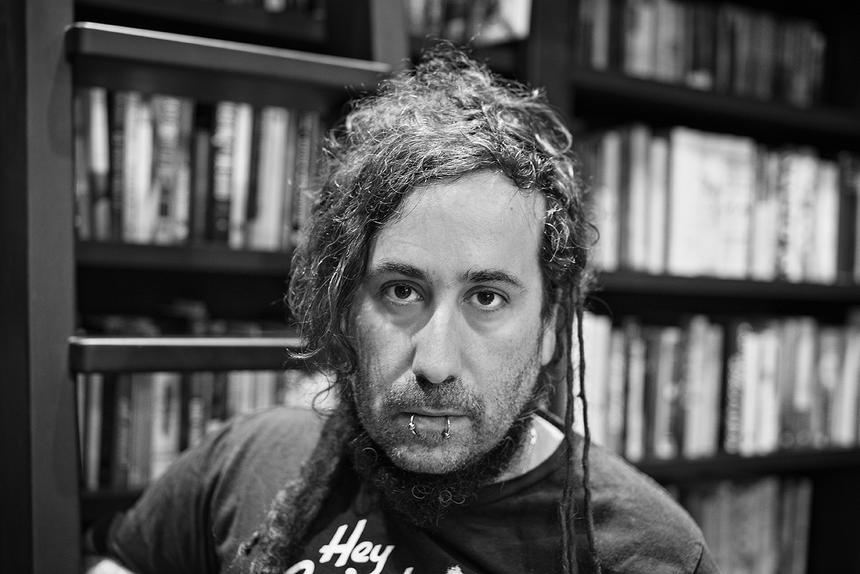 Bram Presser was born in Melbourne in 1976. His stories have appeared in Best Australian Stories, Award Winning Australian Writing, The Sleepers Almanac and Higher Arc. His 2017 debut novel, The Book of Dirt, won the 2018 Goldberg Prize for Debut Fiction in the US National Jewish Book Awards, the 2018 Voss Literary Prize and three awards in the...

‘An impressive and captivating story of remembrance, a journey into the past for the sake of deciphering our present.’

‘In The Book of Dirt the fractured lines of memory create a gripping story of survival and love.’

‘An immense work of love and anger, a book Bram Presser was born to write.’

‘Meet Bram Presser, aged five, smoking a cigarette with his grandmother in Prague. Meet Jakub Rand, one of the Jews chosen to assemble the Nazi’s Museum of the Extinct Race. Such details, like lightning flashes, illuminate this audacious work about the author’s search for the grandfather he loved but hardly knew. Working in the wake of writers like Modiano and Safran Foer, Presser brilliantly shows how fresh facts can derail old truths, how fiction can amplify memory. A smart and tender meditation on who we become when we attempt to survive survival.’

‘The Book of Dirt is a grandson’s tender act of devotion, the product of a quest to rescue family voices from the silence, to bear witness, drawing on legend, journey and history, and shaped by extraordinary storytelling.’

‘A remarkable tale of Holocaust survival, love and genealogical sleuthing…A beautiful tale that will stay with the reader long after the book’s end.’

‘It’s hard not to be captured from the opening epigraph…[A] magnificent ode to all that is lost.’

‘It is difficult to convey the breadth and nuance of this extraordinary work. It is a book about how history is made—and about who is allowed the privilege to remake it. There are echoes here of Sebald’s biting honesty and Chabon’s long and rewarding vignettes. An absolute pleasure to read.’

‘The lyrical, impassioned and culturally rich prose of The Book of Dirt, and its moral force, bears echoes of such great Jewish writers as Franz Kafka (Presser inherited his grandfather’s copy of The Trial), Elie Wiesel, Primo Levi, Isaac Bashevis Singer and Cynthia Ozick…It is a major book, and one for the times: while I was reading it, neo-Nazis in America brought fatal violence to Charlottesville, and, in Melbourne, neo-Nazis placed posters in schools calling for the killing of Jews to be legalised…The Book of Dirt is a courageous work, as necessary for us to read as it was for Presser to write.’

‘As in Sebald’s prose narratives, Presser’s novel inhabits and the dynamic region between fiction and non-fiction.’

‘Presser blurs the boundaries of fact and fiction in a compelling way…A wonderful and original book, told in rich, lyrically beautiful prose that is laden with history and cultural meaning.’

‘A combination of homage, mystery, family history and a sepia-toned love story…The Book of Dirt is magnificent.’

‘Always surprising and beautifully complex, and both deft and sensitive in its handling of its intertwined narratives and materials. It is an incredibly affecting book, one that lingers long after reading—and a remarkably assured debut.’

‘I found Bram Presser’s The Book of Dirt impossible to forget. Penetrating, soulful, and surprisingly welcoming, it reminded me of my own ancestors and how easy it is to sidestep the past.’

‘A gripping tale of survival and an absorbing novelisation of his family’s extraordinary lives…Presser fills in the gaps in his grandfather’s story with vivid character studies; together with poignant black and white snapshots, he brings them evocatively to life. His poetic narrative is a perfect foil for the silences of his forbears.’

‘The Book of Dirt is both a loving, honest portrayal of lives that would have been erased, and an incorporation of the broader lessons of their experience into contemporary mythology. It keeps the discussion about trauma, memory, and intergenerational acts of transfer alive for those generations that follow, that risk forgetting. It is a potent achievement for a debut novel.’

‘Like Maus and Everything Is Illuminated, The Book of Dirt is less a chronicle of the Holocaust than it is a reaction to it…a story about surviving the survivors. But Presser’s book is younger, and was birthed in a world, unlike Spiegelman and Foer’s, where even the survivors largely have not survived. This fact grants the story a kind of reverence, and a kind of innocence.’