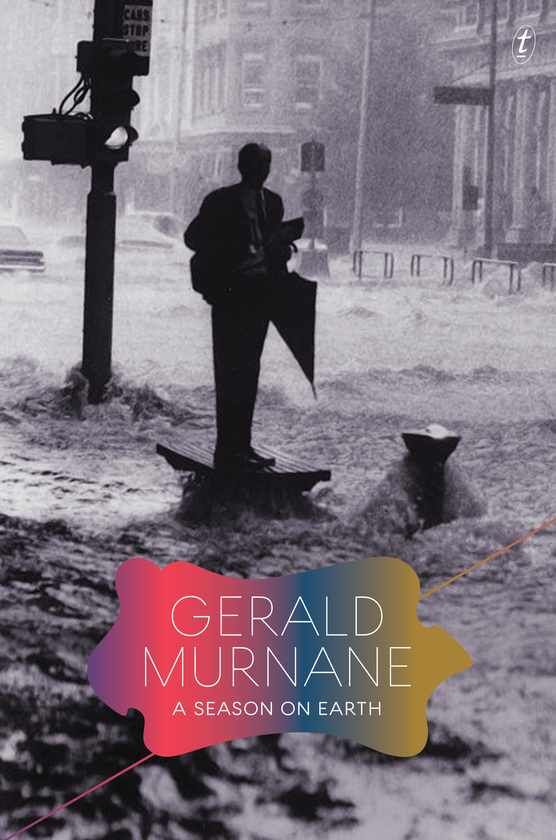 A Season on Earth

What he had been searching for was not the perfect religious order but the perfect landscape…From that moment on he was a poet in search of his ideal landscape.

Lost to the world for more than four decades, A Season on Earth is the essential link between two acknowledged masterpieces by Gerald Murnane: the lyrical account of boyhood in his debut novel, Tamarisk Row, and the revolutionary prose of The Plains.

A Season on Earth is Murnane’s second novel as it was intended to be, bringing together all of its four sections—the first two of which were published as A Lifetime on Clouds in 1976 and the last two of which have never been in print.

A hilarious tale of a lustful teenager in 1950s Melbourne, A Lifetime on Clouds has been considered an outlier in Murnane’s fiction. That is because, as Murnane writes in his foreword, it is ‘only half a book and Adrian Sherd only half a character’.

Adrian Sherd is one of the great comic creations in Australian writing, and A Season on Earth is a revelatory portrait of the artist as a young man.

ABC News
ABC Radio Melbourne: Breakfast
ABC Radio National: The Book Show
Age
ANZ LitLovers
Australian ($): Gerald Murnane’s foreword from A Season on Earth
Australian ($) ‘Murnane has, belatedly, come to be widely recognised as one of the finest and most original writers Australia has produced. ...The definitive qualities of the Murnanian imagination are all present in their raw form, but more importantly their origins are laid bare. ... The restoration of this important early novel to its original form is an event to be celebrated.’
BBC Radio 4: Open Book (autoplay)
Lit Hub
Publishers Weekly (starred review)
Stuff.co.nz
Sydney Morning Herald

Gerald Murnane was born in Melbourne in 1939. He has been a primary teacher, an editor and a university lecturer. His debut novel, Tamarisk Row (1974), was followed by ten other works of fiction, including The Plains and most recently Border Districts. In 1999 Murnane won the Patrick White Award and in 2009 he won the Melbourne Prize for...

‘A Season on Earth recalls us to the truth that Murnane’s avant-gardism emerges out of a resolutely conventional soul…Now that [the novel’s] excised half has been returned, we’re granted a fuller sense of Murnane’s original aims…The comedy here is no less wicked in deployment, but the edge is sharpened…Ludicrous and hectic as [Adrian] Sherd’s casting around for some stable sense of self may be, there is something moving in the efforts he makes…We see an artist inventing himself from scratch…[By the end] Sherd has not yet pinpointed those regions his mature art would explore. What he has learned is that they lie somewhere in the inland empire of his imagination.’

‘A Lifetime on Clouds has tended to be regarded as a lesser work in the context of Murnane’s remarkable oeuvre…In its complete version as A Season on Earth, it reveals itself as a major novel, essential to the understanding of Mur_nane’s development as a writer…It is Murnane’s version of A Portrait of the Artist as a Young Man…Murnane has, belatedly, come to be widely recognised as one of the finest and most original writers Australia has produced. A Season on Earth is easily his longest novel, but it is among his most accessible, and in many respects it can be regarded as a foundational text. It provides a key to the imaginative riches of his substantial body of work…The restoration of this important early novel to its original form is an event to be celebrated.’

‘… at last the trajectory closes between Murnane’s account of his childhood in Tamarisk Row and his lifelong quest to find meaning in the deep connection between words, landscape and mental processes.’

‘Reading Murnane, one cares less about what is happening in the story and more about what one is thinking about as one reads. The effect of his writing is to induce images in the reader’s own mind, and to hold the reader inside a world in which the reader is at every turn encouraged to turn his or her attention to those fast flocking images.’

‘This is a lengthy work, yet not one word is wasted…worth the wait.’

‘Murnane is quite simply one of the finest writers we have produced.’

‘Murnane’s early writing, as shown here, is accessible and often humorous in his own dry way…A Season on Earth could be recommended as an ideal jumping-off point for readers new to Murnane and his particular way of looking at the world.’

‘Gerald Murnane seems to be winning the wider regard his devotees have always known he deserved…A Season on Earth is more like other novels, or more like a novel, than the fictions to come, but Murnane is already determined to make his own forms…[It is] not simply an idiosyncratic take on the Australian Catholic upbringing, but a portrait of an artist as a young man, in which one false vocation has to die so that a true vocation can take its place.’

‘Murnane is now generally recognised as a major literary figure, and the excavation of this work from the author’s archives is important for Australian literary history.’

‘Murnane has skill and power in his ability to tell its story, without show-pony histrionics. The restoration of the full text changes the previously truncated novel and gives it a significant new place in Australian literature. A Season on Earth was the peak of Murnane’s early semi-autobiographical style. He would use it as a step to reach towards a new literary ambition.’

‘… a poignant portrait of a lonely individual trying to come to terms with being different in a world regimented not just by his religion but by a conformist society. …beg, borrow or steal yourself a copy as soon as you can.’

‘Murnane’s protagonist is absolutely unforgettable, and the author himself, whose name has been appearing on Nobel Prize–contender lists recently, only adds to his exceptional body of work with this wonderful novel.’