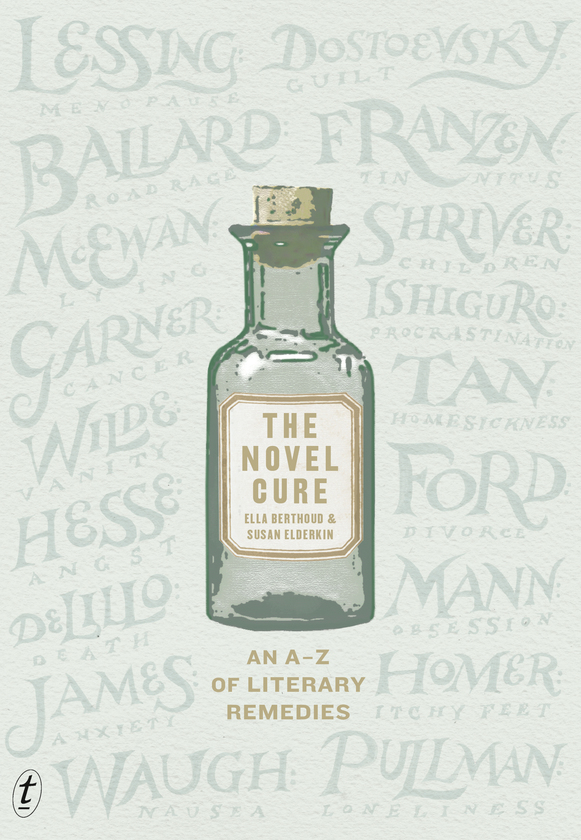 The Novel Cure: An A–Z of Literary Remedies

Sick? Tired? Lost your job? Take one dose of literature and repeat until better.

The Novel Cure is an A-Z of literary remedies that offers a cure in the form of a novel for all kinds of ailments of the mind and body, and life’s general ups and downs. Whether you have stomach flu, low self esteem or are just stuck in a rut, this book will recommend a novel to help ease your pain.

This is a medical handbook—with a difference. Austen for arrogance, Brontë for a broken heart, Pynchon for paranoia or Tolstoy for toothache: the remedy for your malady is at your fingertips.

Featuring old and modern classics, unheard-of gems, novels for all tastes and ages, The Novel Cure is a warm and passionate, witty and wonderful way to expand your reading list (and cure what ails you), and the perfect gift for all bibliophiles.

Learn more about bibliotherapy and submit your own ailment for treatment at The Novel Cure website. 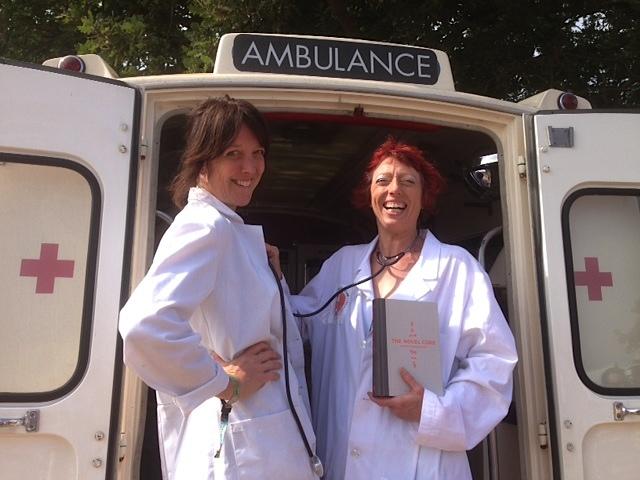 Ella and Susan dispensing bibliotherapy wisdom from a vintage ambulance at the Latitude Festival, UK. 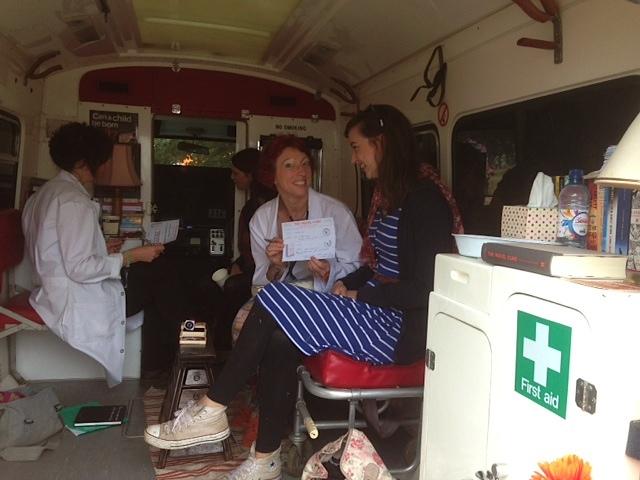 Ella Berthoud and Susan Elderkin have been best friends since university, where they began prescribing books for one another. Ella went on to study fine art, and became a painter and art teacher. Together, they now hold sell-out bibliotherapy sessions and retreats in the UK and have a regular slot with The School of Life.

Susan Elderkin was listed by Granta as one of the 20 Best of Young British Novelists in 2003. She is also a travel writer, journalist and reviewer. Together, with Ella Berthoud, she holds sell-out bibliotherapy sessions and retreats in the UK and has a regular slot with The School of Life.

‘I loved this book within moments of dipping in and know I shall be returning to it for a long time to come. It’s a wonderful reminder of the restorative power of fiction and ideal for anyone who has ever wondered what on earth to read next.’

‘Witty and wise, The Novel Cure is essential for anyone who needs to lie down and recuperate with a good book.’

‘The smart self-help money is not on Dukan or Atkins or Gina Ford but on Tolstoy, Hemingway and Austen…Even if these authors can’t cure you, they can comfort you.’

‘A delightful reference guide…[Berthoud and Elderkin] tackle serious and not-so-serious ailments with equal verve…elegant prose and discussions that span the history of 2,000 years of literature will surely make readers seek out these books.’

‘Anyone who has ever sought solace in a book will appreciate the concept behind this “medical handbook with a difference”.’

‘I’ll offer my own ailment and cure: Reading slump, being in a: Read The Novel Cure.’

‘It doesn’t matter how obscure your physical or emotional ailment, you will cure in this A-Z of literary remedies. It offers more hope than medical nanotechnology with no side effects. Verdict: panacea.’

‘Whimsical and erudite…The Novel Cure remains serious without taking itself too seriously, gives advice without preaching, and advocates, with warmth and humour, the importance of literature as a therapeutic medium.’

‘This delightful book takes a…light-hearted approach to bibliotherapy…The book lists a splendid catalogue of ailments for which reading a book or two is the cure – of course I loved it!’

‘It can be easy to get stuck in a rut when it comes to literary fare. This book is guaranteed to get you spreading your wings.’

‘Eclectic and infectious, The Novel Cure is one of the most revealing and bracing books about books to come along in some time.’

‘An exuberant pageant of literary fiction and a celebration of the possibilities of the novel.’

‘Their suggestions are guaranteed to provide emotional restoration through the magic of prose.’

<p><b>Job, Losing Your</b></p><p><i>Bartleby, the Scrivener</i> (Herman Melville) </p><p>Losing your job can be a hideous blow, both to your pocket and your ego. The best way to deal with it is to try and see it as an opportunity—a chance to take a break from the daily toil, reconsider your options, and perhaps expand into new territories. Rather than conclude that you were a bad fit for the job, decide that the job was a bad fit for you. If you're not convinced, consider all the occasions on which, in your job, you did not want to do the things you were asked to do. Like Bartleby. </p><p>Herman Melville's Bartleby is a scrivener, and when he first arrives for duty at the narrator's law office, “pallidly neat” and “pitiably respectable”. His employer thinks his sedate nature will have a calming influence on his other employees. And at first Bartleby does seem to be the model worker, industriously copying out letters in quadruplicate. But then he begins to rebel. When his employer asks him to check over his writing, Bartleby gives the response: “I would prefer not to.” It soon becomes apparent that he will do nothing beyond the most basic elements of his job. If asked to do anything more, “I would prefer not to” comes the inflexible reply. A due impasse develops in which his employer can't bring himself to fire the scrivener because he's so meek and seems to have no life whatsoever beyond his desk. And Bartleby will do only what he wants.</p><p>Be inspired by Bartleby's act of resistance. To what degree did your job entail compromising over what you really wanted to do? Bartleby's rebellion saw him refusing to leave his desk at all. You, however, now have a chance to move on, and find pastures new. </p><p><b>Children, under pressure to have </b></p><p><i>We Need to Talk about Kevin</i> (Lionel Shriver) </p><p>If you are sick of justifying your childlessness; if you are happy with your life as it is and don't want to spoil things; if you think that the world is populated enough already; if you know that you'd make a useless parent; if you like your nights uninterrupted, and your cream sofa without fingerprints; then the next time someone asks you when they're going to hear the patter of tiny feet in your house, send them this novel for Christmas. They won't ask you about it again. </p><p>See also: Children, not having</p><p>Thirty-something, being</p><p><b>Cold turkey, going </b></p><p>To combat the physical and emotional agony of weaning yourself off an addiction, you need books that hook, compel, and force you to search your weather-beaten soul. Full immersion is recommended; as is the option of aural administration. These books are unafraid to heave you through withdrawal. </p><p><b>The Ten Best Novels for Going Cold Turkey</b></p><p><i>Journey to the End of the Night</i> (Louis-Ferdinand Céline)</p><p><i>Stuck Rubber Baby</i> (Howard Cruse)</p><p><i>The Neverending Story</i> (Michael Ende)</p><p><i>Ask the Dust</i> (John Fante)</p><p><i>Neverwhere</i> (Neil Gaiman)</p><p><i>Oblomov </i>(Ivan Goncharov)</p><p><i>Blood Meridian</i> (Cormac McCarthy) </p><p><i>King Rat </i>(China Miéville)</p><p><i>Nausea </i>(Jean-Paul Sartre) </p><p><i>The Chrysalids</i> (John Wyndham)  </p><p></p><p></p>