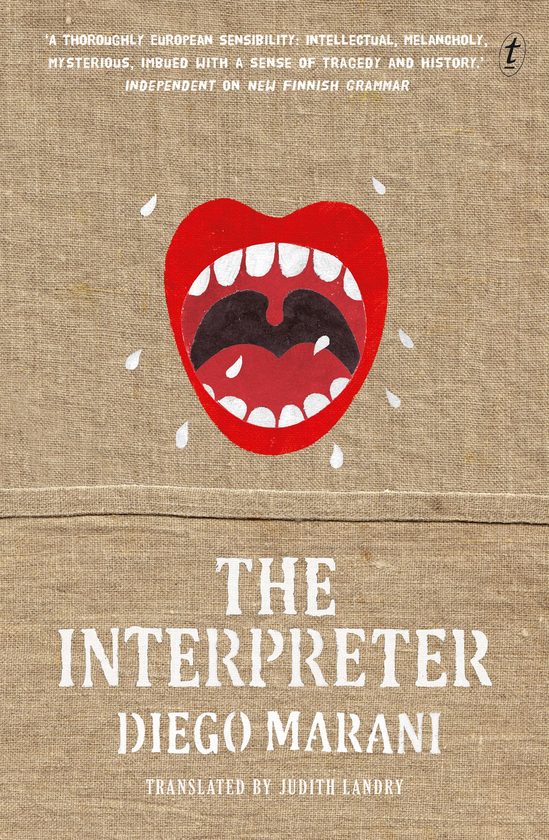 After the acclaimed New Finnish Grammar and The Last of the Vostyachs, The Interpreter is the third in a trilogy of novels on the theme of language and identity.

The Interpreter is both a quest, a thriller, and at times a comic picaresque caper around Europe, while also exploring profound issues of existence.

Günther Stauber, head of Translation and Interpreting at a major international organisation in Geneva, seems to be suffering from a mysterious illness when his translations become unintelligible and resemble no known language. He insists he is not ill and that he is on the verge of discovering the primordial language once spoken by all living creatures. His boss, the novel’s narrator, Felix Bellamy, decides Günther has to go.

In turn, Felix starts speaking the same gibberish as the missing interpreter. And then his wife disappears, perhaps in search of Günther. He seeks help in a sanatorium in Munich where he is prescribed an intensive course in Romanian and forbidden from speaking French. He realises that he must talk to his missing colleague to understand what has happened to him and to have any hope of a cure. As he undergoes profound changes—speaking the language of dolphins, of whistles and squeaks—he is forced to confront the deep mysteries of life.

Essential reading for fans of Diego Marani, and for anyone interested in language.

‘The Interpreter is gloriously grotesque and as witty and profound as Marani himself…Carefully crafted, psychologically intriguing and philosophically profound, I was convinced on all levels. And the translation is beautiful.‘

‘A marvellous novel that is bound to be enjoyed by readers who appreciate the importance of language, identity and existence. Interesting, funny and highly original.‘

‘It is a very entertaining novel with a lot of humour but also dark and frightening. It shows how easily all the certainties of life can disappear and how an individual can be left defenceless to the buffetings of external forces beyond his control.’

‘An enjoyable read rich with insight into how languages shape our lives.’

‘A mesmeric novel about communication.’

‘This is more of a romp than the other two novels, more comedic, albeit a very dark kind of comedy; part investigation into the properties of language, part thriller.’

‘The Interpreter isn’t merely the sequel to New Finnish Grammar and The Last of the Vostyachs: it is a singular and deeply felt thesis, a warped manifesto of sorts, derived from a career spent immersed in languages.’

‘A great read…Playful and deliberately irreverent…[The Interpreter] is further evidence that Marani deserves to be better known than he is.’

‘Superbly written…Poses intriguing questions about life’s deepest mysteries and the evolution of language. Diego Marani is a wordsmith in the most elegant sense.’

<i>Languages are like toothbrushes: the only one you should put into your mouth is your own. It's a question of hygiene, of good manners; it's dangerous to let yourself be contaminated by the germs of another tongue. What do we know about what might be unleashed when they slip into the delicate vessels of our brain, when they mingle with our most ancient juices and generate some hybrid that God never intended?</i>