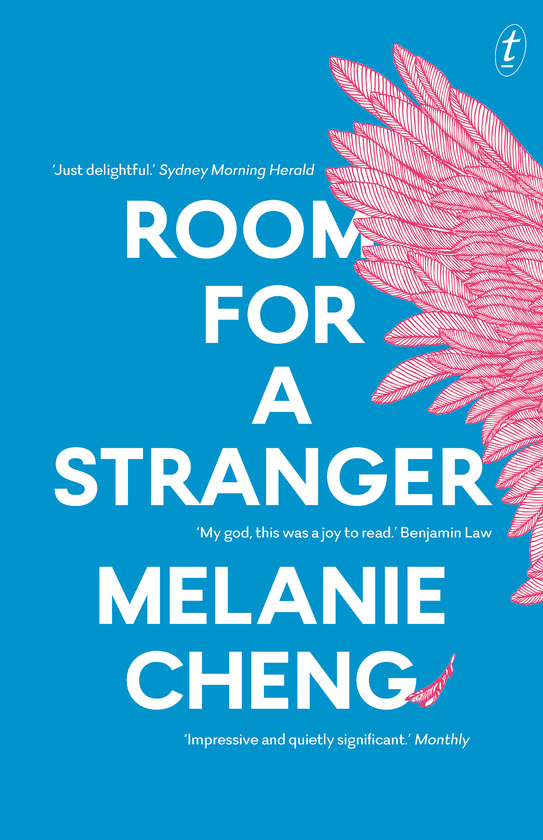 Room for a Stranger

By the winner of the Victorian Premier’s Literary Award for Fiction, 2018.

Since her sister died, Meg has been on her own. She doesn’t mind, not really—not with Atticus, her African grey parrot, to keep her company—but after her house is broken into by a knife-wielding intruder, she decides it might be good to have some company after all.

Andy’s father has lost his job, and his parents’ savings are barely enough to cover his tuition. If he wants to graduate, he’ll have to give up his student flat and find a homeshare. Living with an elderly Australian woman is harder than he’d expected, though, and soon he’s struggling with more than his studies.

Praise for Melanie Cheng
andRoom for a Stranger

‘Melanie Cheng is doing the most difficult, most unfashionable thing: writing about the ordinary lives of ordinary people. Her accomplishment is catching the tremors of their uniqueness and, by underlining this, insisting that everyone is interesting. Being human is in itself extraordinary…This is an impressive and quietly significant book.’

‘My god, this was a joy to read. Every year there’s an Australian novel everyone endlessly passes around and recommends because they bloody love it so much, and this is going to be 2019’s. Room for a Stranger explores the high stakes of quiet moments, reveals the beauty of unlikely connections and shows how the antidote to shame is always compassion. After reading this impossible-to-put-down novel, Melanie Cheng is quickly becoming my favourite Australian writer.’

‘[Room for a Stranger] is beautifully done. Melanie Cheng’s unaffected wisdom is just delightful. You never feel she has an axe to grind or an agenda to push. She may not set out to change the world but the warmth of her affection for lonely people will help to do just that.’

‘This scrupulously written, compassionate novel delivers a surprisingly powerful emotional punch as the two characters tentatively negotiate their lives together in today’s city.’

‘The winner of the Victorian Premier’s Literary Award for Fiction (2018), Melanie Cheng offers up a tender tale of an elderly Australian woman who takes in a boarder.’

Primer
Other editions ofRoom for a Stranger
Other Titles byMelanie Cheng

Extract fromRoom for a Stranger

Rights forRoom for a Stranger