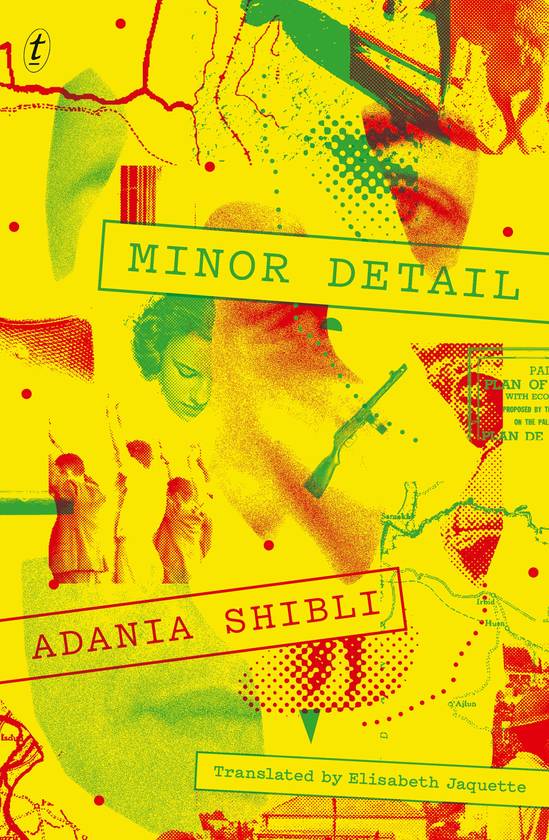 Minor Detail revolves around a brutal crime committed one year after the War of 1948, which Palestinians mourn as the Nakba, the catastrophe that led to the displacement, exile, and refugeedom of more than 700,000 people, and which Israelis celebrate as the War of Independence.

Many years later, in the near-present day, a young woman in Ramallah reads about this ‘minor detail’ in a larger context, and becomes fascinated by it to the point of obsession.

In this compelling novel, Shibli’s haunting prose is a form of resistance in itself.

Read an extract on Literary Hub

Adania Shibli was born in Palestine in 1974, holds a PhD from the University of East London, and has published three novels in Arabic. She teaches at the Department of Philosophy and Cultural Studies at Birzeit University in Palestine and divides her time between Jerusalem and Berlin.

Elisabeth Jaquette is a translator from the Arabic, whose work includes Basma Abdel Aziz’s The Queue, Rania Mamoun’s Thirteen Months of Sunrise, and Dima Wannous’s The Frightened Ones. Her translations have been nominated for the Best Translated Book Award and TA First Translation Prize, and supported by the Jan Michalski Foundation, the...

‘Adania Shibli takes a gamble in entrusting our access to the key event in her novel – the rape and murder of a young Bedouin woman – to two profoundly self-absorbed narrators – an Israeli psychopath and a Palestinian amateur sleuth high on the autism scale – but her method of indirection justifies itself fully as the book reaches its heart-stopping conclusion.’

‘Shibli has created a powerful set of dual heroines, women wracked with disquiet and violence, resisting the frames that have first, been chosen for them, then denied to have ever existed. This is an astonishing, major book.’

‘Adania Shibli’s exceptional novel Minor Detail belongs to the genre of the novel as resistance, as revolutionary text. Simultaneously depicting the dehumanisation that surrounds rape and land-grab, it is a text that palpitates with fear and with outrage. As we join the nameless young woman in her quest to find the truth of a long-forgotten atrocity, we realize how dangerous it is to reclaim life and history in the face of ongoing, systematic erasure. The narrative tempo, that eventually reaches a crescendo, astutely captures how alienation and heightened anxiety are elemental states of living under Israeli occupation. This is the political novel we have all been waiting for.’

‘Written with an exquisite, tactile, and deceptive simplicity, Minor Detail tells the story of a woman’s violation and murder in the aftermath of the Palestinian catastrophe and the founding of the Israeli state, and of another woman’s curiosity about this “minor detail” in the modern day. Immediately after I finished reading this miraculous novel, I read it again; both times, it sliced through my heart. I believe it will be one for the ages.’

‘The power of this book is undeniable. The two halves close around you. I am here for whatever Shibli writes.’

‘Startling, cinematic: Shibli’s masterly, acidic work of subtle symbolism and plot symmetry gives no access to the thoughts of the Israeli soldiers or their victim, making the Palestinian woman’s subsequent first-person narration all the more arresting. This is a remarkable exercise in dramatizing a desire for justice.’

‘The novel is halved into two narratives of equal length, one after the other, and the first recounts an atrocity occurring precisely twenty-five years prior to the second. And through this daring and ingenious architecture, Shibli creates a text of resistance in which the second narrative seeks to recover the past events of the first from erasure.’

‘Heat and the evanescent shimmer of light-soaked sand rise up like a wall of static separating the book’s sections, while images and motifs flit spectrally through the haze, drawn almost magnetically to their twins on the other side… Shibli is a deft chronicler of the blinkering of life wrought by oppressive regimes, the way their manifold codes and proscriptions tighten around perception like a coil of barbed wire.’

‘All novels are political and Minor Detail, like the best of them, transcends the author’s own identity and geography. Shibli’s writing is subtle and sharply observed…never judgmental or didactic. The book is, at varying points, terrifying and satirical; at every turn, dangerously and devastatingly good.’

‘Minor Detail by Adania Shibli packs quite the punch and comes highly recommended.’

‘[A] highly sophisticated narrative that pitilessly explores the limits of empathy and the desire to right (or write) historical wrongs by giving voice to the voiceless.‘

‘In its broad strokes, Minor Detail is a blistering allegory about state violence and the conscription of women’s bodies. In its minor details, it offers a piercing account of everyday life for Palestinians living under Israeli occupation.’

‘An intense and penetrating work about the profound impact of living with violence—Shibli’s work is powerful and this translation by Elisabeth Jaquette is rendered with exquisite clarity and quiet control.’

‘Shibli delicately suggests that the “complete truth” of the crime might never be found out, that perhaps the details in the two stories mirror each other because the past isn’t even past.’

‘Shibli’s third novel is an unflinching account of violence and dehumanisation, and J. M. Coetzee’s endorsement might alert us to the tradition in which this exceptional writer is working—except that Shibli breaks new ground…Brutal, hypnotic and haunting.’

‘A stunning and provocative exploration of what it means to tell the stories of others, especially those who have suffered, and whether it is ever truly possible.’

‘Though Minor Detail initially promises to be a kind of counterhistory or whodunit—a rescue of the victim’s story from military courts and Israeli newspapers—it turns out to be something stranger and bleaker. Rather than a discovery of hidden truths, or a search for justice, it is a meditation on the repetitions of history, the past as a recurring trauma.’

‘Shibli turns her astonishing command of sensory detail into a rich study of memory and violence.’

‘I was transfixed by Minor Detail (Text) by Palestinian writer Adania Shibli. This gripping narrative revolves around a brutal crime committed in the aftermath of the war of 1948, investigated years later by a woman haunted by the story.’

‘Stunning…A haunting meditation…on the historical and personal legacies of war, dispossession, and, perhaps most fundamentally, human cruelty. A major novel of minor proportions.’

‘Stunning…A haunting meditation…on the historical and personal legacies of war, dispossession, and, perhaps most fundamentally, human cruelty. A major novel of minor proportions.’

<i>Nothing moved except the mirage. Vast stretches of barren land rose in layers up to the horizon, and wavered silently under the weight of sky, while the harsh afternoon sunlight blurred the lines of the dull yellow sandy highlands. The single discernible detail in the highlands was a faint, winding border...</i>