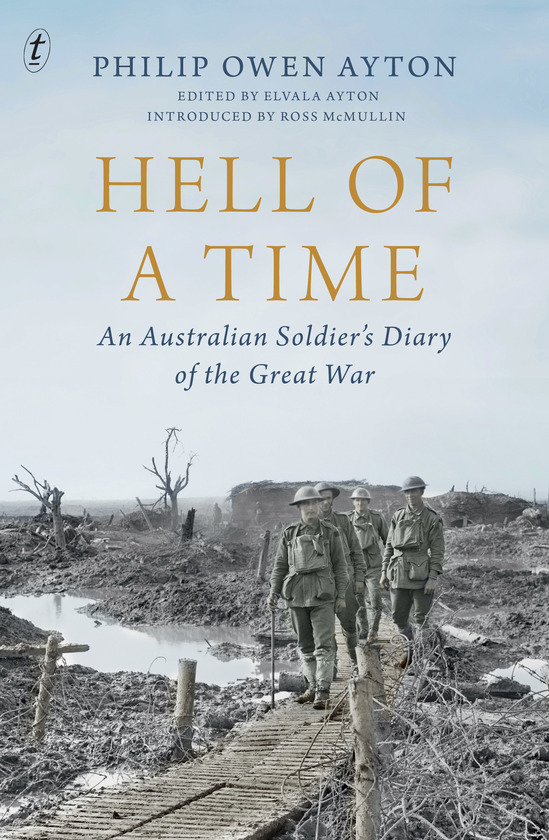 Hell of a Time: An Australian Soldier’s Diary of the Great War

Philip Owen Ayton was working on the Sydney tramways when the call to join the fight against Germany came. Keen for action, he found himself in the First Field Company Engineers in the First Division of the Australian Imperial Forces.

Shipped to Egypt, Ayton soon after took part in the Gallipoli landing. ‘I would not have missed this for anything,’ he wrote to a friend. Badly injured, he was sent to England to convalesce and from there joined the campaign in France, where he saw out the war.

From the start, Ayton kept notes of his experiences, which he would write up in a diary. Plucky, charming and self-deprecating, this son of the new nation records the horrors of trench warfare and his off-duty adventures in Cairo, London and Paris.

This remarkable story is now published for the first time, a century after the war’s end. Accompanied by a postscript by one of Ayton’s sons and Ayton’s poem about the Gallipoli campaign, A Hell of a Time is a vital and compelling account of the Great War.

Philip Owen Ayton was born near Melbourne in 1889. At the outbreak of the Great War, he enlisted in Sydney. He was twenty-five. After the war he married his sweetheart, Nellie Clarke, and they had two sons and two daughters. Ayton died in Melbourne in 1946, aged fifty-seven.

Praise for Philip Owen Ayton
andHell of a Time

‘There is no shortage of diaries and memoirs recording the day-to-day experience of soldiers in World War I…[But] Ayton’s diary is an outstanding example, distinguished both by the vividness of its descriptive writing and by its artless candour…With the story of Gallipoli increasingly veiled in patriotic mythology, it is all the more valuable to be able to see the controversial campaign afresh through the eyes of an Australian soldier who was there.’

Australian
Other editions ofHell of a Time

Extract fromHell of a Time

Rights forHell of a Time