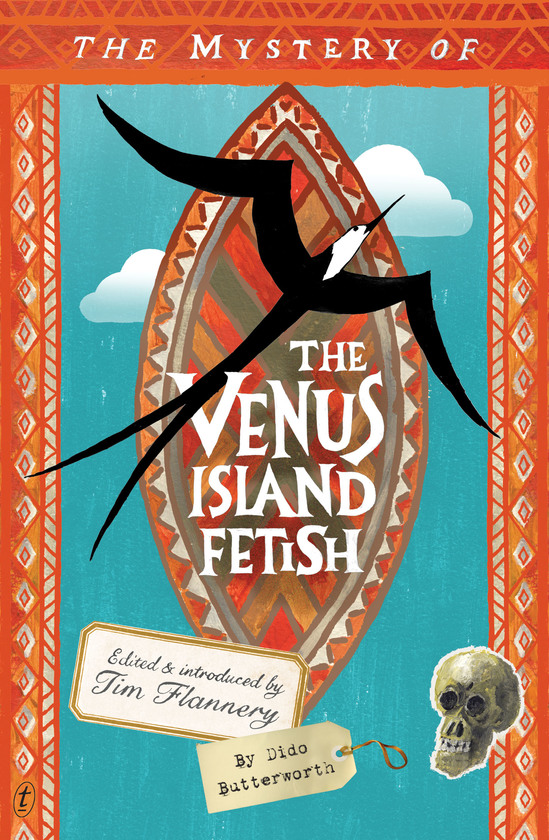 The Mystery of the Venus Island Fetish

Painted in white, red and black ochre, the heart-shaped mask was one of the greatest creations of primitive man. The size of a dining table, it was carved with crazed, spiky lines that told of its maker’s dangerous insanity. The nose, with its wide-open nostrils, sat above a great slash of a mouth filled with jagged, blackened, pig’s teeth. But these horrors were not what one first noticed. It was the eyes that drew you in. Bloodshot. Manic. Hypnotic. They had been fashioned from pearl shells smeared with red ochre, the irises blackened spirals made from cone shells. They pulled at Archie’s soul as powerfully as a vortex.

It’s 1932, and the Venus Island fetish, a ceremonial mask surrounded by thirty-two human skulls, now resides in the museum in Sydney. But young anthropologist Archie Meek, recently returned from an extended field trip to Venus Island, has noticed a strange discoloration of some of the skulls of the fetish. Has someone been tampering with the primitive artefact? Is there a link between the mysterious disappearance of Cecil Polkinghorne, curator of archaeology, and the fetish? And how did Eric Sopwith, retired mollusks expert, die in the museum’s storeroom?

The Mystery of the Venus Island Fetish is a delightfully risque romp, full of eccentric characters, intrigue and adventure.

‘My first novel offered refuge from climate sceptics—and a new and powerful voice.’ Read Tim Flannery on his first novel, in an article for the Guardian.

Tim Flannery, author of several works of non-fiction, was curator of mammals at the Sydney Museum 1984–99.

‘Flannery has had ample fun writing The Mystery of the Venus Island Fetish and readers can share that with him.’

‘There’s a wonderfully quirky array of characters wandering through this delightful period mystery that will not only give you insight into 1930s Sydney, but will also win you over with its warmth and humour. A wonderful read.’

‘Part Indiana Jones-style adventure, part satire on the way museums are run…It features a fanciful plot, a star-crossed hero and heroine, and some of the worst puns I’ve heard. Great fun.’

‘[Flannery] lets rip with a brilliantly daft romp that, alongside a predilection for suggestive surnames, mines the mindsets and manners of pre-war Australia to perfection.’

‘You don’t have to be a museum insider to enjoy the fun. Flannery pokes at anthropologists of an early era.’

‘A fantastic mystery, lots of action, and laugh-out-loud humor…A real find for readers who love misadventure and fantastical tales.’

<p>Foreword by Tim Flannery</p><p> The Butterworth manuscript was discovered in rather unusual circumstances. The initial finding was made by Mrs Fitzgerald, an education officer at the museum. Her classroom is a last stop for stuffed animals no longer needed by the scientists. The exhibits end their days there petted by small hands until baldness, burst seams or an increasingly whimsical appearance consign them to the incinerator.</p><p>On the day of the discovery, Mrs Fitzgerald noticed a group of boys sniggering as they clustered around a taxidermised baboon which I had recently brought her.</p><p>‘That monkey’s got a cigar sticking out of its bum,’ she heard a boy say. Since I had recently transferred the mount to her care, Mrs Fitzgerald contacted me. When I arrived to investigate I found that the hide of the creature had shrunk and it had become almost bald, revealing a scroll of paper, its tip yellowed with age.</p><p>I could just about make out a few typed words on the outermost sheet, one of which appeared to be the name of a retired staff member. Animals are normally stuffed with kapok or cotton wool. Could this be a lost manuscript? My heart skipped a beat. I took the decrepit mount to the taxidermy workshop, where Mr Bowridge extracted one hundred and thirty-five sheets of government-issue, war-time foolscap paper, tightly rolled and covered on both sides with single-spaced type. In Bowridge's opinion they had been inserted at the time of stuffing, some fifty years ago.</p><p>He said that museum folk are notoriously averse to discarding anything. Some curators he knew had accumulated great balls of string, while others hoarded boxes of worn-out shoes. He’d been told that in times past requests had been made to secrete objects, which might better have been destroyed, into animal mounts. Might, I wondered, a curator have selected the anus of an ape to dispose of a ‘sensitive’ manuscript?</p><p>Authorship of the pages is attributed to a Miss Dido Butterworth, curator of worms (retired), but a search of the museum archives revealed no employee by that name. I can only guess that Dido Butterworth is a pseudonym. But for whom? I suspect Hans Schmetterling, curator of worms between 1936 and 1955. Strangely, a character by the name of Schmetterling features in the manuscript.</p><p>I could learn little of the real Hans Schmetterling. Evidence of his activities as curator are sketchy to say the least, and the museum archivist noted that, despite the excellent standards maintained by her department, several key papers relating to his employment could not be found. A search of births, deaths and marriages also came up blank.</p><p>Others may disagree with my supposition that Schmetterling is the author. I’m convinced by the numerous, knowledgeable and often lyrical references to worms that whoever the author was must have had an intimate knowledge of the annelids.</p><p>I have no idea whether<i> The Mystery of the Venus Island Fetish </i>is fact or fiction, but it is a gripping tale and something of a window onto a lost world.</p><p>In that spirit I offer it to the reader.My duties as editor have been light. Some of the dates and events referred to are clearly erroneous, but I felt it best to leave things largely as they are, for fear of sowing further confusion. The only substantial alteration I’ve made is to delete the numerous (and often tediously lengthy) descriptions of worms.</p><p>Melbourne, 2014</p>