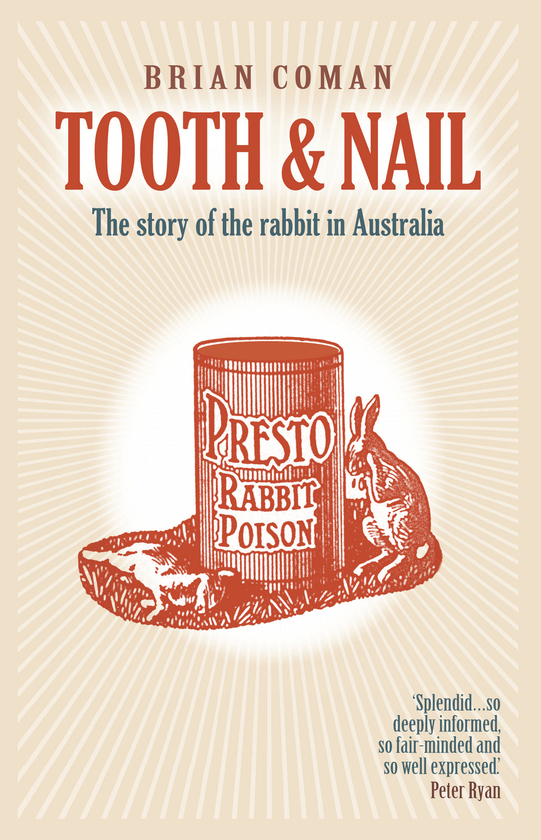 Tooth and Nail: The Story of the Rabbit in Australia

When the First Fleet arrived at Sydney Cove in 1788, its cargo included a small number of rabbits. A hundred years later rabbits had colonised vast areas of the continent, bringing irreversible change to the country’s ecology.

Tooth and Nail is a beautifully written and wonderfully entertaining history about human reactions to the rabbit. A survivor of drought, fire, flood, diseases, predators and poisons, this small and rather attractive creature has irrevocably transformed our environment and influenced social, political and cultural life in this country.

Coman describes everything from nineteenth-century poisoning techniques to destroying rabbit warrens with explosives, from the many weird theories circulating as to how to destroy the rabbit to Louis Pasteur’s attempts to infect Australian rabbits with chicken cholera. He tells the story of a Geelong grazier who was one of the first to bring rabbits to Australia. And the book charts the extraordinary postwar story of the battle against the rabbit, including the unprecedented impact of myxomatosis and rabbit haemorrhagic disease.

Tooth and Nail is an indispensable history of how Europeans, through the introduction of a single species, changed Australia forever.

Brian Coman was research scientist with the Victorian Department of Natural Resources for twenty-three years and has been a contributor to numerous book and journal publications.

Other editions ofTooth and Nail