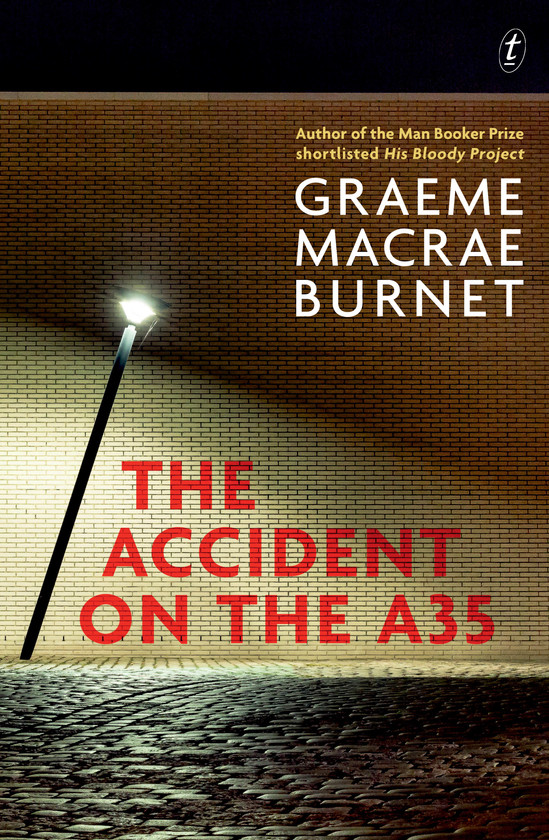 The Accident on the A35

Read an extract from Accident on the A35 here.

From the author of the Man Booker–shortlisted His Bloody Project.

The methodical but troubled Chief Inspector Georges Gorski visits the wife of a lawyer killed in a road accident, the accident on the A35. The case is unremarkable, the visit routine.

Mme Barthelme—alluring and apparently unmoved by the news—has a single question: where was her husband on the night of the accident? The answer might change nothing, but it could change everything. And Gorski sets a course for what can only be a painful truth.

But the dead man’s reticent son is also looking for answers. And his search will have far more devastating consequences.

The Accident on the A35 is the spellbinding follow-up to Graeme Macrae Burnet’s debut noir novel The Disappearance of Adèle Bedeau.

Praise for Graeme Macrae Burnet
andThe Accident on the A35

‘It’s a long time since I read a police procedural (more or less) that was so gripping and intelligent.’

The Times, on His Bloody Project

Sunday Times, on His Bloody Project

‘Grabs you by the throat and doesn’t let you go.’

Guardian, on His Bloody Project

Hannah Kent, on His Bloody Project

‘With its deft writing and well-rounded characters, this novel is an accomplished and atmospheric police procedural that frequently strays into classic noir badlands.’

‘This engrossing literary thriller combines a page-turning crime story with a deeper meditation on life and existence that delves beyond the respectable veneer of a provincial French town and the mundane lives of its inhabitants…A rewarding read.’

‘Fans of Georges Simenon’s Inspector Maigret novels will find and enjoy familiar ground in The Accident on the A35, the second in a trilogy of French detective novels by Scottish writer Graeme Macrae Burnet.’

ShareThe Accident on the A35via:

ShareThe Accident on the A35via:

Extract fromThe Accident on the A35

<i>Mme Barthelme smiled sweetly and apologised for receiving Gorski in bed. <br>‘I’m afraid I was feeling rather—.’ She allowed her sentence to trail off with a vague gesture of her hand, which caused her breasts to shift beneath the cotton of her nightdress.<br>For a moment Gorski forgot the purpose of his visit. <br>‘Madame Thérèse did not give me your name,’ she said.‘Gorski,’ he said, ‘Chief Inspector Gorski of the Saint-Louis police.’ He almost added that his forename was Georges.<br>‘Is there enough crime in Saint-Louis to merit a Chief Inspector?’ she said.<br>‘Just about.’ Normally Gorski would have been offended by such a remark, but Mme Barthelme managed to make it sound like flattery.</i>