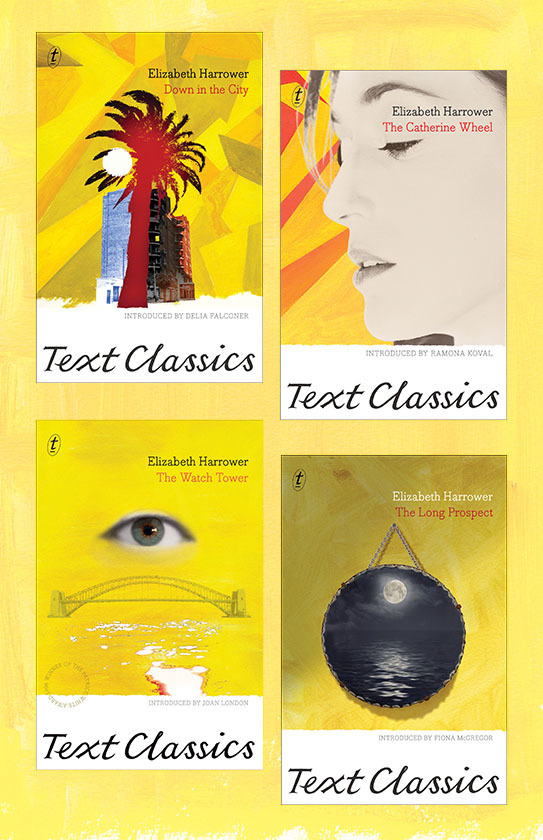 Text has published four of Elizabeth Harrower’s haunting novels in the Text Classics series—Down in the City, The Long Prospect, The Catherine Wheel and The Watch Tower.

Purchase them as a set and save more than $10.

‘The most striking thing about Elizabeth Harrower’s four short novels, written over a decade from the mid-1950s to the mid-60s, is that they are all about people suffering emotional abuse, and yet are a pleasure to read. They are beautiful little nightmares. For while Harrower’s chief interest is suffering—usually the kind hidden inside miserable households—she renders each character’s trauma with pitch-perfect sentences. Turning the last page of one of these novels is to wake from a frightening dream, one felt in every vivid detail.’ Australian

‘Harrower captures brilliantly the struggle to retain a self.’ Guardian UK

‘Harrower’s writing is witty, desolate, truth-seeking, and complexly polished. Everything (except feeling, which is passionately and directly confessed) is controlled and put under precise formal pressure. Her sentences, which have an unsettling candor, launch a curling assault on the reader, often twisting in unexpected ways…Harrower is an exceptionally subtle psychologist…[Her] five novels have an almost relentless thematic consistency and a strikingly similar darkness of vision.’ James Wood, New Yorker