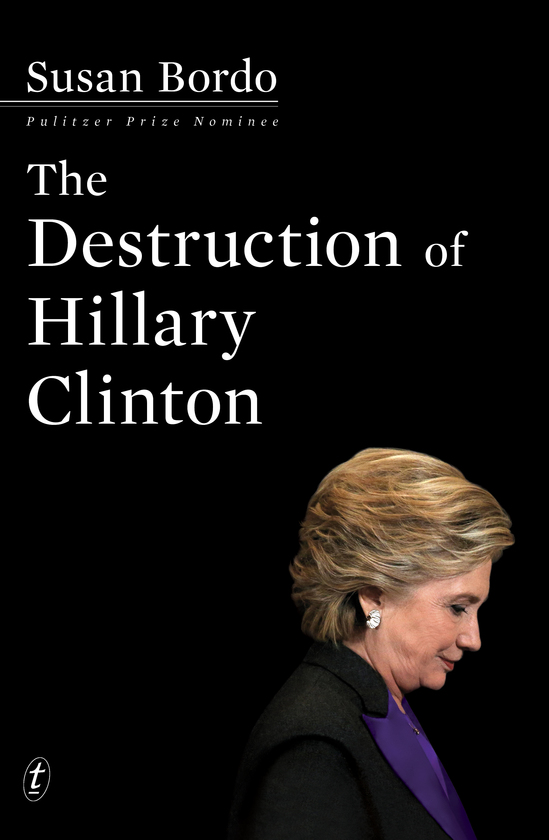 The Destruction of Hillary Clinton

The result of the 2016 presidential election was widely thought to be a foregone conclusion: a historic victory for an extraordinarily well-qualified, experienced and admired candidate against an opponent seen as not just unelectable but unfit for office.

As we know, it didn’t work out like that. So how did Hillary Clinton lose? How did she come to be seen as a tool of the establishment, a chronic liar and a talentless politician?

In this masterful narrative of the 2016 campaign year, Susan Bordo unpacks the right-wing assault on Clinton and her reputation, the way she provoked the suspicion and indifference of a younger generation, and the unprecedented influence of the media.

Urgent, insightful, and engrossing, The Destruction of Hillary Clinton is an essential guide to understanding the most controversial presidential election in American history.

Dr Susan Bordo holds the Otis A. Singletary Chair in the Humanities at the University of Kentucky, where she is a professor of Gender and Women’s Studies. She is an author of a number of seminal books on feminist theory, including the Pulitzer Prize-nominated Unbearable Weight: Feminism, Western Culture and the Body, The Male Body: A New Look at...

‘One of the most incisive social critics working today—and one of the best writers, too. Whether she’s dissecting Lolita, movie and book, or Marlon Brando, 50s icon and symbol of masculinity, she’s never predictable and often profound.’

‘With an almost chatty style, but also possessing a subtle power, her book transforms our habitual understanding of movies, advertisements, novels, and even trends and toys…Bordo’s talent for reading culture presents us with the most valuable gift: a newly configured imagination.’

‘Bordo’s feminist analysis is concise and incisive. She moves from the double standards faced by female politicians, often in the form of the likability penalty, through to a discussion of the ultimate red herring, “the emails.”’

‘Due to no fault of Bordo, who writes in an accessible and enjoyable style, the reading experience is as sickening as ingesting medicine meant to induce vomiting because we know how awfully the story ends. Bored sharpens her focus most clearly and closely on sexism, exposing how gender stereotypes, misogynistic assumptions and chauvinistic typecasting have made it nearly impossible for Clinton or her supporters to influence, much less control, public perceptions about her ideology and candidacy.’

‘This perceptive, thoroughly readable book will strike a chord with her supporters and prove enlightening to many others hoping to make sense of a contentious election.’

‘Bordo’s explanation for how these voters—not misogynists, not automatic Trump voters—came to see “elitist”, “corporate whore” Hillary as unsupportable is important for us all to digest, especially if we ever hope to see a woman lead the United States.’

‘Bordo is, of course, right to note that Clinton was the subject of vicious, misogynist attacks. The stark contrast Bordo draws with the 2012 campaign and the reaction to Mitt Romney’s ‘binders full of women’ gaffe and the disgusting, misogynist bile that issued from the mouth of the current president is striking.’

‘Chicken soup for the Clintonite’s soul.’

‘Susan Bordo is one of Clinton’s “true believers”, and her book is a howl of rage against the forces she believes came together to defeat her candidate.’

‘An excellent catalogue of the smears that have been levelled at Clinton over the years…certainly the result of groups on the right unable to accept her place in the corridors of power.’