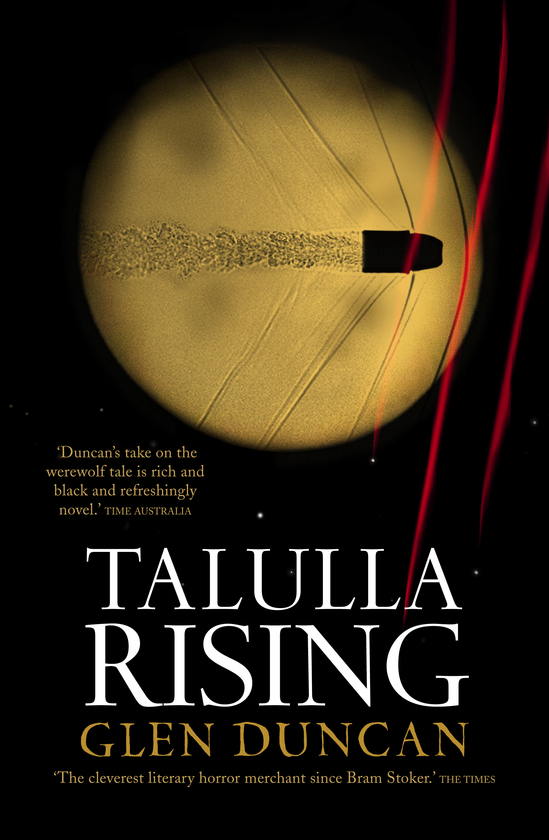 tabletBuy the ebook
Talulla Rising plunges the magnificent co-protagonist of The Last Werewolf into an adrenaline-charged solo quest, a race against time torecover her lost child. Along the way Talulla crosses paths with a psychotic new WOCOP leader, an unlikely human love, blood-drinking religious fantatics, a pack of London werewolves and (rumour has it) the oldest remaining vampire on earth.

This second instalment in Glen Duncan’s werewolf trilogy pushes the were-myth further into uncharted territory with the definitive twenty-first-century female of the species. Gory and sexy, Talulla Rising is a thrilling take on our relationship with the wildside from a highly regarded literary novelist.

The final book, By Blood We Live, will be published by Text in 2014.

Glen Duncan was born in Bolton in 1965 and studied philosophy and literature at Lancaster University. His first novel,Hope, was published in 1997 and has been followed by seven further novels. I, Lucifer (2002) was shortlisted for the Geoffrey Faber Memorial Prize. His work has been translated into more than a dozen languages. He lives in...

‘A magnificent novel. A brutal, indignant, lunatic howl. A sexy, blood-spattered page-turner, beautifully crafted and full of genuine suspense, that tears the thorax out of the horror genre to create something that stands rapturous and majestic and entirely on its own.’

‘This thriller has a classic literary feel, graphic writing and dark humour. To be devoured in large meaty chunks.’

‘Lovers of the paranormal will delight in his cleverness and sly humour which lets us know that he’s not taking it too seriously.’

‘Duncan’s novel is that rare and wonderful creature, literary horror. The werewolf tale might not possess the potent charge of the vampire story, but Duncan shows us just how vital it can be.’