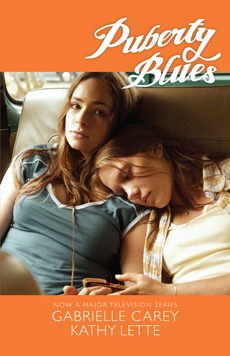 An Australian teenage classic back in print.

This new edition of Puberty Blues is published jointly by Text Publishing and Random House Australia, in time for the new Channel 10 TV series screening from August 15 2012.

‘By day, we were at school learning logarithms, but by night—in the back of cars, under the bowling alley, on Cronulla Beach, or, if you were lucky, in a bed while someone’s parents were out—you paid off your friendship ring.’

For Deb and Sue, life is about surfies, panel vans, straight-leg Levis, nicking off from school, getting wasted and fitting in.

But why should guys have all the fun?

Puberty Blues is raw, humorous and honest: a compelling account of teenagers navigating the chaos of life. It is one of the great coming-of-age stories in Australia, and it remains as relevant now as when it was first written over three decades ago.

Gabrielle Carey revisited the places of her youth while working as a script consultant for the new TV series:

‘Since the discovery of my childhood cave I regularly drive down to the Shire and spend time in the Sir Joseph Banks Reserve. If no one is around, I scramble off the path and up into my old play space. I’m too big for it now but that cramped, earthy outcrop still holds a sense of primal childish peace; of a time before Bankies, before riots and before the loss of innocence that became Puberty Blues .’

Read the full article in the Australian.

Get the full low-down on the 8-part series from Channel 10.

Gabrielle Carey is the author of novels, biography, autobiography, essays, articles and short stories, including Confessions of a Teenage Celebrity, about the tumultuous time surrounding the writing and publishing of Puberty Blues.

Gabrielle teaches writing at the University of Technology, Sydney, where her long-standing preoccupation with James...

Kathy Lette moved on from Puberty Blues to work as a newspaper columnist and television sitcom writer in Los Angeles and New York. She has subsequently written eleven international bestsellers, including Girls’ Night Out, Mad Cows (the movie starred Joanna Lumley and Anna Friel), How to Kill Your Husband (recently staged by the Victorian Opera)...

‘I don’t recall reading Puberty Blues so much as devouring it. I was about thirteen, alone in my bedroom with the door firmly shut. I was fascinated.’