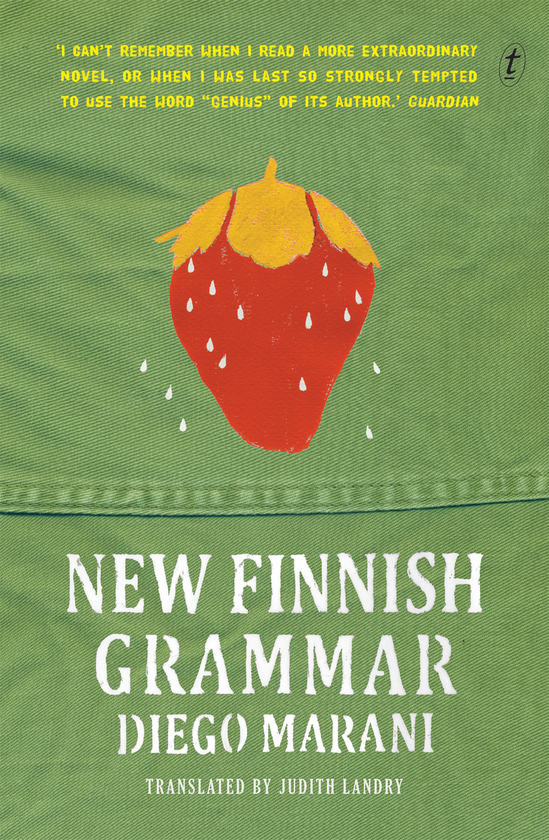 New Finnish Grammar is an unforgettable tale of one man’s search for meaning and for identity amid the devastation of WW2.

The right word. That’s all the difference between life and death. Memory is inseparable from words. Words draw things out of the shadows. Learn the words and you will recover your memory.

One night at Trieste in September 1943 a seriously wounded soldier is found on the quay. With nothing to identify him, and having lost his memory and language, he is a mystery to the crew of the German ship that rescues him. The ship’s doctor, a Finn, identifies the name embroidered on the man’s jacket as Finnish. Taking him for a fellow countryman, he gradually teaches him to speak Finnish and eventually finds him a berth in an army hospital in Helsinki, from where he may be able to piece together his former life.

But the longer he spends in Helsinki, the less he feels at home; the more he learns of the Finnish language and rich history, the less familiar it seems; and by the time we learn his true identity, it’s too late.

‘Marani is a noted linguist, and his novel will be appreciated best by those with a keen interest in the philosophy of speech. It will also appeal to general lovers of language, who, by the story’s end, will better understand Finnish, which can be heard “in nature, in the woods, in the pull of the sea, in the call of the wild, in the sound of the falling snow”.’

‘A well-paced dissection of what drives a man to kill to survive, to forget to preserve a past, then lose it all just when the storm clouds are drifting away. Verdict: Unforgettable search for memory.’

‘Don’t be misled by the world’s most unappealing title. This i a stunner…Marani’s tale is deeply satisfying…This is language to be savoured, enjoyed and revisited…One of the most astonishingly beautiful books I have read.’

‘This is an extraordinary book, as good as Michael Ondaatje’s The English Patient and with a similar mystery at its heart.'

‘An entrancing, disturbing exploration of the limits of speech and self.'

‘Marani has created a staggering study of loss and an act of retrieval that is heroic.’

‘Deep and rich, did I say? That isn’t the half of it. I can’t remember when I read a more extraordinary novel, or when I was last so strongly tempted to use the word “genius” of its author.'

‘This is a desperately sad book. It takes its place beside Romantic stories of Kaspar Hauser and Wolf Boy of Aveyron, which have haunted the European imagination for two centuries…Judith Landry is to be congratulated on her seamless translation from the Italian.’

‘New Finnish Grammar is truly a marvel. The interweaving of plot and language is extremely well executed and the central mystery provides an urgency that will keep you turning its relatively few pages until the end. Meanwhile, the philosophical and psychological implications of the connection between memory, language and self will leave you deep in thought for some time after turning that final page.’

<i>'Don't you have any hopes at all? Is there nothing that you wish for?' she managed to ask again, though she was clearly having difficulty getting the words out. <br>'Yes, there is: I hope to find some memory of me in someone else; I hope to find someone who can tell me about even one single day in my past life: about one summer's afternoon when I was a child, some outing, what games I played. Because surely I too must have run around a courtyard kicking a ball?'</i>