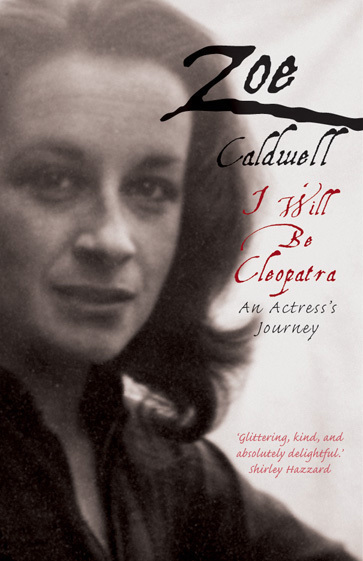 I Will Be Cleopatra

Zoe Caldwell is quite simply one of the great stage actors of our time. She has worked with Paul Robeson, Laurence Olivier, Edith Evans, John Gielgud and Tennessee Williams. I Will Be Cleopatra is her enchanting memoir, which describes a journey from the suburbs of Melbourne to a life working in theatres around the world.

Born in Melbourne in 1933 at the height of the Depression, Zoe Caldwell first appeared on the stage at the age of nine in Peter Pan. She joined the Union Theatre Repertory Company in 1953, where she worked with John Sumner and toured with Barry Humphries. At the new Australian Elizabethan Theatre Trust, she played roles under the legendary Elsie Beyer, who sent her to England where Zoe began a Shakespearean career that would culminate in her portrayal of Cleopatra, the Bard’s greatest female role.

This marvellous book will not only delight Zoe Caldwell’s fans but is an unforgettable account of an acting life. Caldwell gives an extraordinary history of late twentieth century theatre, both in Australia and abroad, and tells us the inside story about many of its most prominent stars. I Will Be Cleopatra is a magical tale, both humorous and modest, of a determined and passionate pursuit of the essence of theatre.

Zoe Caldwell has won four Tony Awards for her Broadway roles in Slapstick Tragedy, The Prime of Miss Jean Brodie, Medea, and Master Class. She has featured in numerous BBC TV productions, and appeared in The Purple Rose of Cairo. In 1998 she received the Sir John Gielgud Award. Caldwell lives in New York.

Praise for Zoe Caldwell
andI Will Be Cleopatra

‘A great book by a great actress about a great art.’

Extract fromI Will Be Cleopatra

Rights forI Will Be Cleopatra