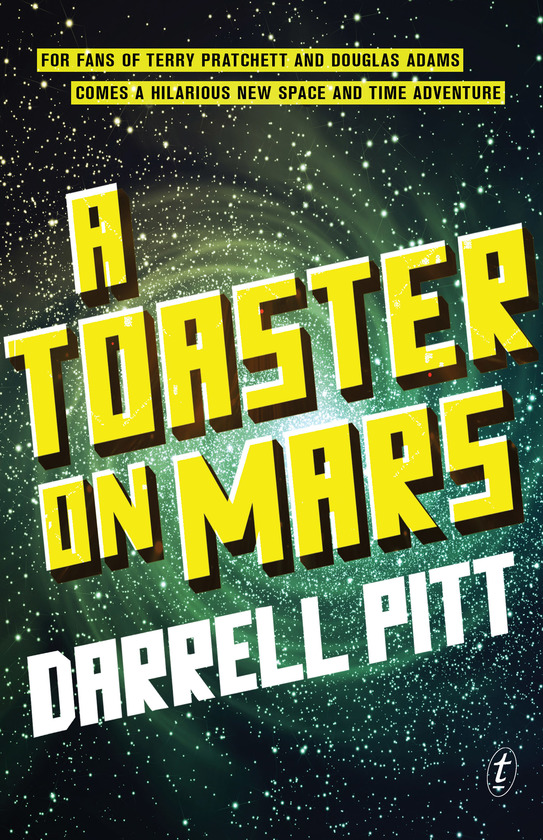 A Toaster on Mars

For fans of Terry Pratchett and Douglas Adams comes a hilarious new space and time adventure.

The year is 2509 and Earth is a rather polluted blue dot that suffers from global warming, overpopulation and not enough people using deodorant.

Blake Carter, star agent with the Planetary Bureau of Investigation, isn’t having a good day. First he’s beaten up by a bunch of religious zealots, and then he’s assigned a robot—sorry, cyborg—as his new partner, right before his ex-wife calls to tell him his daughter has gone missing. His car keeps criticising his driving, and finally, to top things off, the world is held to ransom by his nemesis, evil genius Bartholomew Badde.

Can things get any worse?

‘First, I should make clear that at no point in this story does a toaster appear on the planet Mars. Nor on Jupiter, Venus, Mercury or any other planet local to Earth. There isn’t even a toaster in any nearby star system, although there is a waffle maker on Rygil Five and a rather nice casserole dish on Xypod Nine, but these culinary devices have nothing to do with our story.’ Read an extract on the Text blog.

‘The adventures of Blake Carter and Nicki Steel, along with commentary by editor Zeeb Blatsnart, bring a lighthearted science fiction story to life. A Toaster on Mars is a laugh-out-loud and thoroughly enjoyable read!’

‘This is a fun, exuberant book to read which sees the main character, Blake Carter, on a non-stop race around the solar system ending up on the titular Mars (Carter on Mars anyone?)…The book is an obvious homage to Douglas Adams but is not slavish in its interpretation and what I really liked, as an SF fan, was picking up on all the other SF references in the story. I particularly enjoyed the inclusion of an immersive 3D version of Plan Nine from Outer Space…4.23657 toasters out of 5.’

‘This novel crackels with wit and violence…the fun doesn’t let up.’

‘Upper Primary and Lower Secondary students who appreciate the ridiculous will enjoy this fast paced book with its zany sense of humour. There is nothing subtle about the irony in the novel which creates many laugh-out-loud moments.’

‘This pseudo-science-fiction book provides laughs of all types: readers will progress from snickers to giggles to, finally, belly laughs and shouts of outrage.’

‘A jaded (some might say washed up), hardened investigator with a twelve-year-old is an unusual narrator for a YA tale, but Australian author Pitt pulls it off with aplomb…It’s not quite Douglas Adams amounts of interstellar wonkiness, but given the fact that there’s a sentient Swiss cheese sandwich threatening their lives at one point, it comes close.’

Bulletin of the Centre for Children's Books

‘A manic caper full of talking cars, espionage blunders, Brady Bunch psychosis, and comedic interjections from the book’s fictional editor, as Carter and his partner travel from the depths of the Mariana Trench all the way to Mars (where, spoiler alert, there are no toasters). Packed with references to contemporary culture, this satirical, quirky sci-fi adventure might appeal to fans of Douglas Adams’ well-loved Hitchhiker’s Guide to the Galaxy.’

‘The adventure begins and holds its own in a tale full of jokes, puns and carnivorous sandwiches, yes, really. A comic tale that doesn’t disappoint, curl up with a cuppa and a sandwich (if you dare!) and enjoy…’

‘Works exceptionally well…I can’t wait to see what weird adventures are next in store for our heroes.’